Nativeplanet
»
Travel guide
»Get To Know About Nalknad Palace

Get To Know About Nalknad Palace 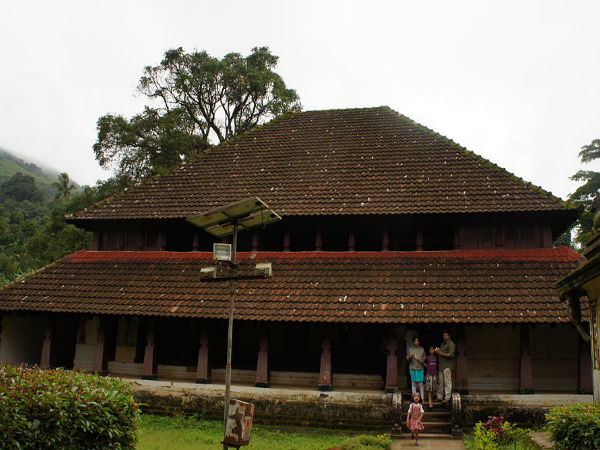 Nalkand Palace or Naalnaad Aremane is a palace located in the Kodagu district of Karnataka. It is located in a village called Yavakapadi at the foot of the Thadiandamol Peak, which is the highest peak in Coorg.

The palace has elaborate wood carvings, a low-tiled roof, a crescent dome and a pillared facade. The palace is an architectural marvel. The courtyard of the palace has sculptures of four bulls. The palace has a beautiful collection of ancient paintings.

The months from October to June is the best time to visit the palace.

The palace appears to be a very simple two-storey structure which has a very close resemblance to the nearby houses in the area. Once you step into the palace, you will discover the delicate detailing in the interiors of the palace.

A unique feature which is found in this palace is the figures of snakes depicted on the pillars of the palace. The snakes appear in a twisted geometric pattern which is known as Nagamandala and it happens to be a very common feature found not only here, but also all across the country.

These patterns can be found in Hindu, Jain and Buddhist temples which are believed to be a sort of protection against the evil forces and negativity.

In the interiors of the palace, especially the main hall, the rooms of the king and queen on the first floor are completely covered by murals, which can be found even today, even after 500 years, after they were painted.

Also Read : Other Places To Visit In Coorg

The most impressive among them is the scene which is depicted in the hall, of a victory procession, which shows the king making a triumphant return after defeating Tipu. The murals in the queen's room are completely different and yet very impressive.

An interesting fact is these murals were forgotten and covered with plaster over the years and were rediscovered with the efforts of INTACH, which has managed to restore much of the original work. One can still find parts of the walls which are left empty, under which probably there would be even more paintings to be discovered.

With only two rooms on the first floor, this suggests that it was a private retreat and not for the family. The palace is located amidst the dense forest, which seems to point out that this palace might have been used as a hunting lodge.

Dodda Vira Rajendra was the king who had constructed this palace. He is considered a legendary figure in Kodagu and his heroic acts are remembered even today. His escape from Periyapatna which was under Tipu Sultan is the most well-known amongst various other legends.

After his escape with his entire family to Virjapet, he signed a deal with the British to help him overthrow Tipu and win back his kingdom. This palace was built to commemorate this victory. However, the king lost his entire family during his long military campaigns. He married again in 1796 to Mahadevamma with whom he lived in this palace until her death in 1807.

In front of the palace is a mandap which was constructed especially for the king's marriage, which is covered with carvings and sculptures of various gods and couples. While the mandap still stands, most of the carvings have given in to time and weather and remain as ruins of the once beautiful structure.

Comments
Read more about: coorg
Other articles published on Mar 8, 2017