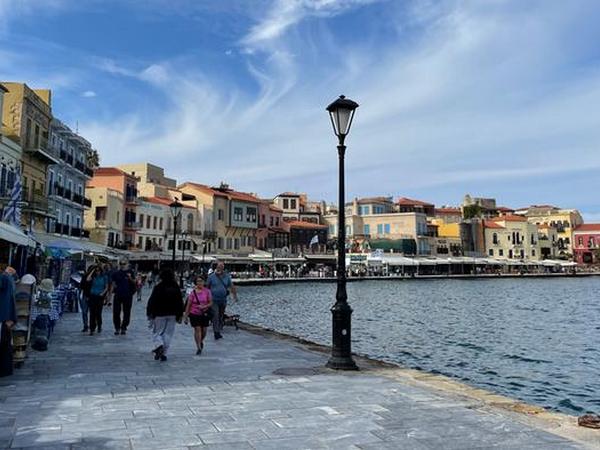 In the last week of October, Amalia Delakis and her son Dimitris of Kriti Plus car rental, located near the Old Port of Chania on Crete, were finally taking a breather after a busier than expected season. "Last year was a very difficult period and most of the small businesses didn't know if they would survive," Amalia told DW. "Basically, this year, everyone came at once: in July, August and September and into October 2021. Most companies didn't have enough cars to support the big influx of people all arriving at the same time."

The family suspects they were busier in part due to tourists' hesitancy to take public transportation in the midst of the pandemic and the fact that many other countries remained closed to tourists such as Turkey, the USA and Thailand.

After much uncertainty about what the 2021 tourism season would bring, Greece fared better than expected, particularly in the fall. And that was despite Greece being affected by wildfires in August near Athens and on the island of Evia, as well as on Rhodes, which may have discouraged some tourists from coming.

Yet the country welcomed more than two million visitors to its shores during the months of July and August of 2021 alone, more than any other European nation. September saw 75 percent of tourists who came in the same month in 2019, Tourism Minister Vassilis Kikilias told SKAI radio at the end of October. The government just met its target of having more than 50% of the tourists of 2019, according to statistics available at the time of writing.

Kikilias told the network: "Greek tourism is not switching to autopilot, nor did it do so last year. A very great effort has been made in the midst of the pandemic and it is clearly a result of the efforts of hoteliers, the transport sector, people who work in the tourism professions, airlines, tour operators, but also due to the country's advertising campaign, the visitors, and the sustainable tourist product."

Greece was one of the first to open to tourists and did not require visitors to quarantine upon arrival. It was a move out of necessity: the tourism industry accounts for roughly a quarter of the country's GDP. In 2020 the situation was dire for many who rely on tourism income generated in the summer to get them through the winter.

While the 2019 revenue generated from tourism was €18.2 billion (US $21 billion), the figure crashed to €4.6 billion in 2020. Islands such as Crete and Rhodes in the South Aegean, which depend on mass tourism from abroad, were hit hard.

The busy shorter season and boom in business that stretched well into October on Crete was unique. "This year was super strong and it's still going. The other day I was driving to town and I saw four buses unloading in the center of town from TUI and large tour operators like that. It's new to us," said Alexandra Monousakis. She and her husband Afshin Molavi run several businesses in and around Chania, including Monousakis winery and Salis restaurant at Chania's port.

Molavi noted that customers this year at his restaurant seemed keen to spend more on dining and higher quality wines than in previous years. "People were willing to say, we've been sitting in our apartments for so long we can go out and spend little bit more money," Molavi explains. Perhaps it's a pandemic vacation trend: Greece's finance minister Christos Staikouras told cabinet ministers that expenditure per trip in the first seven months of 2021 exceeded that observed in 2019 based on travel receipts.

The Cretan tourism market, like that of Rhodes and Kos, and other islands in the Southern Aegean is dominated by package tours in which large tour operators like TUI and others fly in customers on all-inclusive holiday packages.

On Rhodes, 85% of tourists booked their trips with packages offered by tour operators. "The season was better than we expected, especially after August, which was 80% of 2019" Christos Michalakis, general manager of GEM travel, which specializes in excursions around the island, told DW.

October, was an especially successful month for the company, which counted 10% more tourists than before the pandemic in 2019.

Back on Crete, Katja Haffenrichter-Kritsotakis, Secretary of the Board of the Rethymno Hoteliers Association points out that a precondition for many people to travel this year with the ongoing pandemic was knowing that COVID measures would be complied with. "The package gave them security, that everything was arranged - and that everybody would stick to COVID prevention measures." 70% of overnight stays in the association's member hotels came from tour packages.

The Greek government announced plans to open the 2022 season in mid-March to encourage tourists to come to Greece as soon as possible - typically the season opens later, around Easter.

Alexandra Manousakis and Afshin Molavi are busy preparing for the upcoming season. They are grateful for the successful season despite the pandemic, but worry about what a sharp increase in tourists in 2022 could mean. The government has pledged that Greece will become a leader in sustainable tourism, but now that the numbers are picking up once again, concerns return to overcrowding on Crete, as well as other islands which focus on package tourism - like Santorini and Mykonos.

"If we have double the amount of people who just want to come and trash the beaches and get drunk, that would be awful. Nobody likes that. We're hoping for tourists who are interested in finding out more about the culture and experiencing nature," Manousakis told DW. "Crete is beautiful, and an island like this could continue to be an amazing destination if tourism is developed right."