Nativeplanet
»
Travel guide
»Golden Temple in Vellore: The Tales of Gold and Art

Golden Temple in Vellore: The Tales of Gold and Art 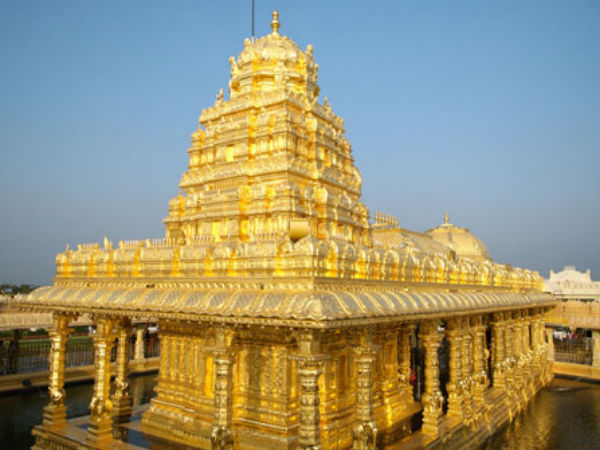 India has a strong affinity towards gold; it is a metal which is the sign of prosperity and wealth in the country. From gold jewellery to the golden idols everything gets a lot of attention. Isn't it amazing to know that deities in several temples are also made out of gold? You might wonder why 'gold' has been discussed so much? The reason is simple; gold is not only used for ornamental purposes but also to beautify the architectures. The name 'Golden Temple' is synonymous with Harmandir Sahib (The Golden Temple) in Amritsar. Another masterpiece like that is the Golden Temple in Vellore.

Popularly known as Sripuram Golden Temple, it is an exotic architecture carved in gold. It is dedicated to Goddess Lakshmi and the temple is is also called as 'Sri Lakshmi Narayani Temple'.

Vellore is a historic city with several tourist attractions. Just a ride of 212km from Bengaluru is enough to reach Vellore. The Vellore Golden Temple is situated in Thirumalaikodi about 8km from Vellore city.

A Distant View of the Entrance

Sri Lakshmi Narayani Temple is on a sprawling 100 acre land with the backdrop of green hills. The prominent feature of the temple is the exotic gold plating. Interestingly, every little intricate sculptures in the gold are made manually. Several layers of gold coating on a copper base with artistic designs gives a luxurious look to the temple.

Tourists have to pass through a star-shaped path which represents a chakra (religious symbol of the wheel) to reach the main temple. The sprawling temple complex surrounded by greenery is nothing less than a feast for eyes.

The Goddess of Wealth and Prosperity - Goddess Mahalakshmi idol in the inner sanctum fills your mind with joy and spirituality.

A visit to this beautiful temple will leave you amazed by its luxurious architecture.

Places to Visit in Vellore

A trip to the Golden Temple in Vellore and many other beautiful places are worth a visit.

Comments
Read more about: vellore tamil nadu
Other articles published on May 19, 2016
We use cookies to ensure that we give you the best experience on our website. This includes cookies from third party social media websites and ad networks. Such third party cookies may track your use on Nativeplanet sites for better rendering. Our partners use cookies to ensure we show you advertising that is relevant to you. If you continue without changing your settings, we'll assume that you are happy to receive all cookies on Nativeplanet website. However, you can change your cookie settings at any time. Learn more
Change Settings Continue