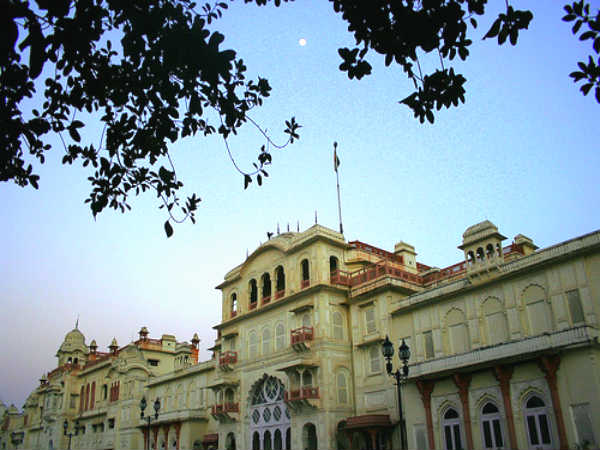 Do you lick your fingers with joy when you are served some delicious 'Makki di roti' and 'Sarason da saag'? Do colourful 'pagris' remind you of the wedding season? Or are you the type who prefers 'Bhangra' over hip-hop or any other dance form as that just brings out the enthusiastic dancer within you and you set the dance floor on fire? By now you must have guessed which place we are talking about.

The land of 'Patiala Peg' and 'Patiala Shahi Salwar', the royal abode of the Maharajas welcomes you all! But, can you guess who was the one that found this amazing place which we absolutely adore? It was Baba Ala Singh who first put forth the initial foundation of "Quila Mubarak" and the city was constructed around it.

Thanks to the founder, it now flaunts the name 'Ala De Patti'. Deemed as the headquarters of Punjab, the fourth largest city, Patiala is located in the Malwa region of Punjab. When it comes down to praising its brilliant architecture, Patiala has been inspired by the framework of temples and beautiful historic places encircling it.

Enough talks about Patiala and now it's time to explore it further and enlighten our souls!

The skilful taste of the Sikh architecture is quite commendable when it comes to the Qila Mubarak. It is fortunate to have been structured so beautifully and hence called the Fortunate Fort. It is a fortification where you can spot the amalgamation of Mughal and Rajput style of architecture.

The Androon Hall shall leave you enthralled with its different-coloured glass art-work, while the Darbaar Hall shall immerse you in the elegant collection of mirrors, armoury, weapons, guns and chandeliers. Your eyes shall sparkle at the gorgeous paintings of the Sikh rulers and other sections of admiration include Ran Baas, Darbar Hall, Qila Androon with a well-built underground sewage system inside the Qila and Qila Bahadurgarh. Built by Maharaja Ala Singh in 1764, this fort attracts a lot of sightseers.

This complex set on a ten-acre ground, in the center of Patiala, includes a main palace known as Qila Androon, the Darbar Hall and also the Ran Baas, which is a guest house. The architectural techniques of this complex is a blend of Mughal and Rajasthani styles. There is also a Shiva Temple near this exceptional complex, along with bazaars where the tourists can shop for, footwear, handicraftstraditional apparel.

The 6-feet statue of the divine goddess Kali and Pawan Jyoti was carried from Bengal to Patiala and the first sacrifice or 'Bali' offered to the Goddess was that of a water buffalo. The temple was built by Bhupinder Singh who ruled from 1900 to 1938. You can seek blessings from the temple situated opposite Baradari Garden on the Mall Road of Patiala City.

Its construction is simply magnificent and thus, it holds the crown of a 'national monument.' Goddess Kali is definitely the 'Protectress' who stands jubilant after smiling her best triumphant smile with a necklace of skulls and severed arms shining brightly on her neck while she holds the head of a demon, a Trident that flashes like lightning and a knife which glints with sacred mantras inscribed on it.

Goddess Kali can be seen projecting a calm expression while the sweet smell of jasmine, rose and sandalwood permeates. Goddess Kali's body is enveloped in sacred ash or 'Vibhuthi' and her eyes always shine with the power of a million black fires. Hail the divinity of Goddess Kali!

The Lakshman Jhoola at Rishikesh is quite popular and this being an exact copy, attracts global trotters. It is a splendid suspension bridge across a small lake which is near to the Sheesh Mahal and is the point of linkage between the Mahal and Banasar Ghar.

You can visit the North Zone Cultural Centre and a hall is dedicated to exhibitions in the Banasar Ghar. Do not believe anyone who says that the bridge is weak because it is actually sturdy and its infrastructure can be appreciated too. However, you have to careful while prancing about on the swing, especially in the presence of children. One slip or fall and you might end up hurting yourself and spoil your sightseeing plans. Views from such an elevation shall be panoramic and are worth capturing! So, see to it that you slip in a camera into your purse or backpack and 'CLICK'!

Doesn't the name itself give you royal vibes? It has enormous stone walls and its entrance is in the form of an arch. The front area is gorgeous which follows the pattern of Rajasthani structural design plus the presence of numerous Chattris with Jharokas shall enlighten you. The feel that this Mahal wants to give you is that of the Shalimar Gardens in Lahore and thus terraces, water channels, mesmerizing gardens and, of course, a Sheesh Mahal was dreamt of being built.

The old Moti Bagh was designed in that manner and thus the royal kings used to take relaxing strolls on the terrace relieving their minds of all stress and enjoying a calm atmosphere. Can you imagine that it has 15 dining halls? You cannot comprehend how huge the entire area must be!

A hanging bridge over a magnanimous artificial lake was spotted here and the best part was that it was carved by keeping the 'Lachman Jhoola' in mind. Do not forget the Sheesh Mahal Museum at any cost! Paintings sprinkled with Rajput and Kangra styles are present here. It is a treasure box reflecting the rich art and culture as well as sculptures from the 9th and 10th century. You will feel proud to admire the medals won by the Maharajas of Patiala tucked safely here!

Avid bird lovers can head to the southern parts of Patiala in Punjab. People from every nook and cranny sweep in to tame the bird enthusiast inside them within the 654 hectares sanctuary. Few of the wild species which you can spot here is the wild boar, hog, deer, blue bull, black buck, peafowl, grey partridges, myna, rhesus monkeys, jackal, quails, etc. If it is flora you are attracted to then bamboo, imli, jamun, drek, eucalyptus, karri, lasura, khajoor, neem, kikar, teak and shisham are some varieties present in the sanctuary!

It is always intriguing to think about the marvellous 'Palace Of Mirrors' or the 'Sheesh Mahal' constructed by Maharaja Narinder Singh who is also the man behind the main Moti Bagh Palace. If we talk about an artificial lake present here, it has two watchtowers present in the North and South and is linked to the Banasar Ghar: abode of stuffed animals. It also flaunts a suspension bridge which replicates the Lakshman Jhoola.

Does Tibetan art interest you? The museum at Sheesh Mahal will present many fine objects including sculptures of a varied array of metals. An exhibition of interesting Burmese and Kashmiri objects, royal wooden carved furniture and ivory carvings of Punjab are also put on display.

The portraits of Patiala rulers are embellished on the walls which add a pinch of royalty. What shall definitely catch your eye are a few manuscripts which are both Janamsakhi and Jain in origin. The 'Gulistan-Bostan' manuscript by Sheikh Sadi of Shiraz was originally owned by Shah Jahan.

To view this spectacular museum, you have to walk a little further away from Central Patiala towards the Bypass road where it is located. You will feel dreamy to be transported back to the royal era of the kings where swords, cannons and other artillery from the wartime are decorated in the museum. A lot about the enchanting history of the past can be experienced, especially with the help of guides who are well-versed about all the artefacts present here.

Gigantic portraits of the Patiala families adorn the walls while the ceiling is wooden-framed and covered with Plaster of Paris Arabic-style tiles. The chandeliers are also worth your time with their dazzling beauty on display. They are made of Bohemian cut glass which is not seen around very often. Carrying a water bottle is preferable as going around the entire place can actually be tiring.

Can you guess how the garden got its name? 'Bara' means twelve and 'dara' means door. It is a garden with twelve doors of entry. It was built by the emperor Rajinder Singh. He has a strong connection with Mother Nature. He loved collecting numerous rare species of plants and saplings and raised them in his garden with the utmost love and care. His home near the Baradari Garden was the beautiful Baradari Palace.

However, to catch a glimpse of the enthralling garden, you have to go towards the north of Patiala city. To be more precise: the outer part of Sheranwala Gate. Rajinder Kothi's another name was Baradari Kothi. Can you guess why? Yes, you got it right as its location was in close proximity to the Baradari Garden. Baradari Palace, if seen today, is a reservoir of precious historical documental memoirs.

Let us talk about Sri Guru Tegh Bahadur Ji who began his journey towards Delhi but came to a certain place called Samana. He came here by travelling through Kiratpur, Bharatgarh, Ropar, Bahadurgarh and Moti Bagh. Guru Ji had come as a replacement for Sai Anayat Ali. He used to preach about Sikhi to the locals and regular diwans were also conducted by him. The place where he would sit is known as Gurudwara Sri Thara Sahib Samana.

There is another rash Muslim whom you should hear about. He resided in Gurudwara Sri Thara Sahib and his ancestral people were Hindus. His behaviour was such that he threw a dead cow's bone into the well from which Guru Tegh Bahadur's Sikhs were about to draw water. Thus, Guru Tegh Bahadur built a brand new well for the village people.

Banur is a small town on the Chandigarh-Patiala National Highway. The origin of the name 'Banur' is interesting. It is from the name of the local goddess of music, 'Mai Banno'. Previously, the town was named as Pushpawati which meant an area where flowering plants grew in abundance. Old temples present here include Mai Banno Temple, Basanti Devi Temple, Gugga Mari, Radha Krishan Mandir also called ladies temple and many Shiv Dvalas.

When it is the Shravan month, a three-day fair takes place on the naumi day at the Gugga Mari temple. People contribute onions and wheat. An offering of chana, dal and water is also done at the Shitla Mata Temple during a mela organized every year. People bring their kids here as they have faith that it shall keep them away from diseases.

Banur has a grand Gurudwara on the highway which is in the memory of Bhai Bhanda Singh Bahadur Ji. People can enjoy a variety of religious functions here. Make way for yet another fact about Banur: it also served as an assembly constituency.

Wow! A lot of information to take in! It is time to book tickets for Patiala and explore it to the fullest.