Nativeplanet
»
Travel guide
»Famous Architectures and Their Replicas in India

Famous Architectures and Their Replicas in India 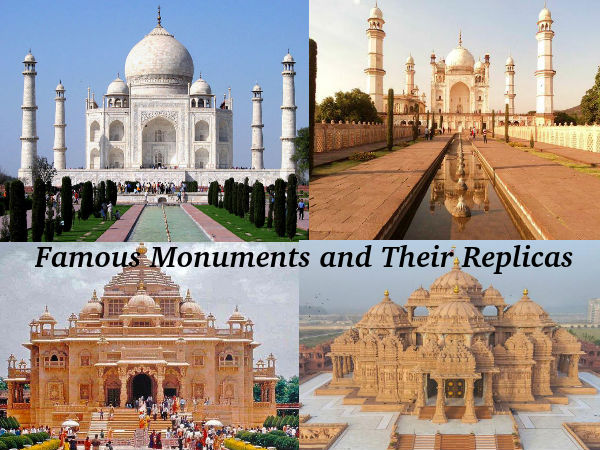 Some architectures are built in such a way that it's impossible to replicate them. Such structures would have been made with an extraordinary talent and hardwork. For example, some believe that Bengaluru Aramane (Palace) resembles Windsor Castle in England. Whatever it is, when we look back into the history we'll find many monuments and their replicas in India.

Here we're going to describe certain famous architectures and their duplicates in India. That doesn't mean that the replicas are a total copy of original buildings. However, their basic design look similar to the monuments, hence they're considered as the duplicates.

Taj Mahal is one among the seven wonders of the world. It is also one of the most famous monuments in India. The Mughal Emperor Shah Jahan built this great architecture in the memory of his wife Mumtaz Mahal.

Bibi Ka Maqbara is a popular attraction in Aurangabad of Maharashtra. The basic design of Bibi Ka Maqbara looks similar to Taj Mahal. Hence, it is also called as Dakkhani Taj (Taj of the Deccan). One interesting fact is that the prime architect Ata-Ullah was the son of Ustad Ahemad Lahauri, the architect of Taj Mahal.

Akshardham Temple in Delhi is similar to the Akshardham in Gujarat. The grand temple is one of the major attractions of Delhi tourism.

Sri Harmandir Sahib Gurudwara is a major landmark of Amritsar. It is the popular Sikh religious site which is popularly known as the Golden Temple. It was designed by the 5th Sikh Guru, Guru Arjan during the 16th century.

Jagannath Temple is one of the temples in 'Char Dham Yatra'. It is located in Puri which is at a distance of 60km from Bhubaneshwar, the capital of Odisha. An incarnation of Lord Krishna, Jagannath is the main deity of this temple.

The gopuram (monumental temple tower) of Jagannath temple in Chennai resembles Puri Jagannath temple. In this temple we can also see Balbadhra and Subhadra's idols along with Jagannatha statue.

Uttara Guruvayurappam Temple is a Krishna Temple situated in Delhi. It is one of the famous temples located in Mayur Vihar and has a strong resemblance to the original Guruvayur Temple.

Sabarimala is one of the famous Hindu temples situated in Periyar Tiger Reserve in Kerala. The temple gets thousands of visitors and it is dedicated to Lord Ayyappan (Subramanya).

Mini Sabarimala is also dedicated to Lord Ayyappan and it is located in NCH Colony in Mumbai.

Tirupati is well known for Tirumala Venkateshwara Temple. It is one of the popular Hindu pilgrimage sites which is located in Chittor of Andhra Pradesh. Tirupati is often crowded and lakhs of devotees visit the temple year round.