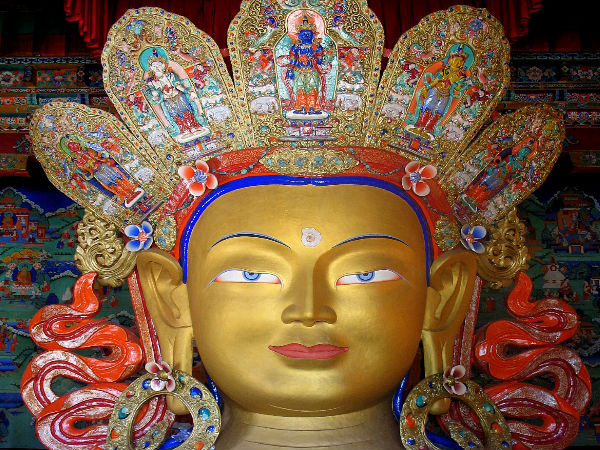 A travel around the Buddhist monasteries in North India takes you to some amazing landscapes and Buddhist architecture.

Many Buddhist monasteries are situated on a mountainous terrains in India. Reaching these religious sites itself is a task as they're built in such high altitude areas.

Let us explore these interesting and beautiful monasteries!

Kye Monastery or Kee Gompa is the largest one in Spiti Valley. It is located on a hill near the Spiti river.

Kye Gompa is an ancient Buddist site which has seen many setbacks, attacks and also natural calamities. The walls of the building has mural paintings which narrate the stories of Buddhist scriptures.

Phugtal Gompa or Monastery is a unique one. It is actually a rock-cut cave architecture situated in Lungnak Valley in Ladakh.

The monastery follows the Tibetan Buddhism and it is dedicated to 14 Arhats (14 prime followers of Buddha). It is situated on a cliff and trekking here is a task in itself.

Thiksay Monastery is famous for the largest statue of Maitreya Buddha in Ladakh. It is also popular for its style of architecture which resembles the Potala Palace in Lhasa, Tibet.

Thiksay Gompa follows Gelug sect of Buddhism and one of the prime monasteries in North India.

Tawang is an emerging tourist destination in India. Tawang Monastery is said to be the largest in India.

It is also known as Galden Namgey Lhatse and follows the Mahayana Buddhism. The enchanting view of the town from the monastery is just amazing.

Hemis Monastery was built before 15th century, it is situated in Hemis of Ladakh.

Hemis Monastery is known for the Hemis Festival which is celebrated in the name of Lord Padmasambhava (one of the famous Gurus in Drukpa Lineage).

Tabo Monastery is an ancient monastery which has survived the test of times. It was destroyed by the earthquake in 1975 and later the building was restored.

Tabo Monastery contains many scriptures, murals and frescos which depict the stories of Buddhism. Tabo Gompa is a protected monument by ASI.

Rumtek Monastery was built in 16th century and it is located in Sikkim.

This is the largest monastery in Sikkim which follows the Karma Kagyu sect of Buddhism. Rumtek Monastery was in the controversy for many years due to the conflicts between different sects of Buddhism.

Comments
Read more about: tawang sikkim spiti
Other articles published on Feb 16, 2016
We use cookies to ensure that we give you the best experience on our website. This includes cookies from third party social media websites and ad networks. Such third party cookies may track your use on Nativeplanet sites for better rendering. Our partners use cookies to ensure we show you advertising that is relevant to you. If you continue without changing your settings, we'll assume that you are happy to receive all cookies on Nativeplanet website. However, you can change your cookie settings at any time. Learn more
Change Settings Continue