Explore Your Taste Buds At These Biryani Destinations In India 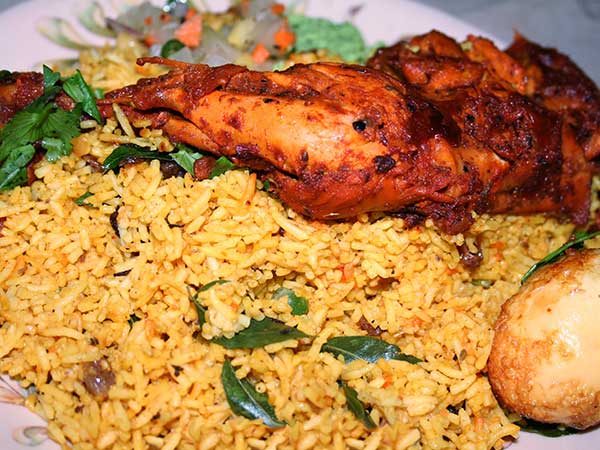 India is a place where you can find one out of three people everywhere, claiming biryani as their favourite dish. Biryani has become an international dish today with its outlets spread all over the world, especially in the southern parts of Asia. With its piquant flavours and exotic taste, undoubtedly, biryani dominates the taste buds of every rice-lover.

Be it any part of the world, biryani lovers certainly find out the best destinations with appetizing aroma of this yummy rice dish. There are numerous varieties of Biryani made across the Indian subcontinent and each variety differs on the basis of condiments, spices and type of meat or vegetables used.

Always craving for biryani? Well, here we list down the major places in India where you can satisfy your appetite and lust for this scrumptious and enticing dish.

An ideal city for all geeks and freaks, Delhi is definitely the place where one can meet the end of their desires, be it regarding their daily life, shopping or food. Also famous for its Mughlai cuisine, Delhi is sometimes assumed as the birthplace of biryani during Mughal period. It is believed that biryani was introduced during the reign of Shahjahan. Since then, the exponential progress in tang and flavour of this palatable dish has been consistent.

Served with curried chilli peppers and raita, standard Mughlai biryani is eaten in major parts of the city. Even though Mughlai biryani has its fixed ingredients, nevertheless, each part of the city has a unique style of cooking it. Nizamuddin biryani, cooked with limited use of meat and spices, Shahjahanabad biryani, cooked with healthier meat, and achaar biryani are some different varieties made in Delhi.

There are several places in Delhi where you can savour the finger-licking taste of biryani, such as Chandni Chowk, Jama Masjid, National Market, etc.

Known for its royal hospitality and Awadhi cuisine, Lucknow, the city of Nawabs, is one of the oldest biryani destinations in the world. It is not possible for any visitor to be in Lucknow and not enjoy the crispy kebabs or delicious biryani served on the streets and across the city.

Awadhi biryani of Lucknow differs from other biryanis in terms of cooking method and serving style. Being the city of nawabs, one can obviously expect the dish to be served royally. Here, rice and meat are cooked in dum style separately and then served with the layers of major ingredients. The speciality of Awadhi biryani lies in the method of slow oven cooking, which enhances the taste and the richness of the ingredients used.

Places in Lucknow where you can enjoy the authentic flavours of biryani include Chaupatiyan Chowk, Gomti Nagar, Bangla Bazaar, etc.

It is objectionable to not add the biryani capital of India in this list of top biryani destinations. Hyderabad, known for the Charminar, is more famous for its culinary skills. If you are hungry and crave to taste the best of non-vegetarian dishes in India, then you need to be on the oldest streets of Hyderabad. Here, you can savour the superlative of biryanis.

The style of preparing the dish is entirely different here. Prior to cooking the rice, the meat is soaked in a solution of spices for hours and then the flavoured rice is added to it, thereby, making the rice absorb the all of the aroma. Consequently, it helps in bringing in the authentic flavours.

Another famous biryani destination in India, Kolkata is known for its biryani made out of potatoes instead of meat. The first ever biryani in Kolkata was made in the 19th century. Potatoes and eggs in biryani were introduced by the poor people of this state who could not afford to use meat. Consequently, giving rise to different varieties of biryani.

The major speciality of Kolkata biryani lies in the ingredients and spices used in making this savoury dish. Use of cardamom, cinnamon and cloves differentiate its flavour on one side and rice flavoured with rose water along with saffron, enhances the richness of taste on another side. Collectively, it gives biryani a complete unique and mouth-watering taste.

So, these are the major biryani destinations in India where you can explore your taste buds with different varieties of biryani. If you are a foodie and a sureshot biryani-lover, then these places are must-visit for you. Do not miss any chance to taste the best of biryanis.

Comments
Read more about: india travel food vacation
Other articles published on Jan 10, 2018
We use cookies to ensure that we give you the best experience on our website. This includes cookies from third party social media websites and ad networks. Such third party cookies may track your use on Nativeplanet sites for better rendering. Our partners use cookies to ensure we show you advertising that is relevant to you. If you continue without changing your settings, we'll assume that you are happy to receive all cookies on Nativeplanet website. However, you can change your cookie settings at any time. Learn more
Change Settings Continue