Nativeplanet
»
Travel guide
»Ever Been To These Divine Temples In Varanasi?

Ever Been To These Divine Temples In Varanasi? 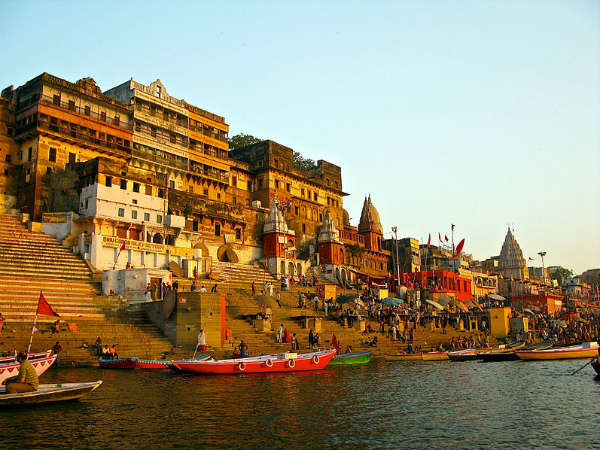 One of the holiest places on earth amongst Hindus, Varanasi, also called Benaras, is a religious hub and has been in existence for thousands of years. Therefore, it is also sometimes referred to as one of the oldest-living cities in the world. It is the place where several religions like Hinduism, Jainism and Buddhism flourished and hence, you can find innumerable temples within its boundaries.

In fact, you can spot a temple in Varanasi every 50 metres. Settled on the banks of Ganga river, Varanasi is also said to be the abode of Lord Shiva and is believed to be the place from where the entire world originated.

Hindu devotees come here in millions every year to take a dip in the holy waters of Ganga river and pay their respects to Lord Shiva so that they can get rid of their sins and cleanse their soul amid the divinity and godliness of Varanasi. So, how about planning a tour of this spiritual town? Following are the major temples in Varanasi which you must visit, without which your journey to this holy town will be deemed incomplete.

Undoubtedly, the holiest of them all and one of the twelve Jyotirlingas in India, Kashi Vishwanath Temple is believed to have been the site where Lord Shiva appeared in the form of a light. Since then, this temple has been considered as one of the holiest sites in the world amongst Hindus and is frequented by millions of pilgrims every year.

The current building of the temple was completed in the 18th century by a queen of Holkar dynasty as the original temple is said to have been destroyed by several Muslim invaders over a period of time.

Kashi Vishwanath Temple has also been mentioned in the ancient texts of the Puranas; therefore, it is commonly termed as the site from where one can easily achieve salvation. So, what do you think of visiting this holy site and savouring the beauty of its divine and devotional aura?

Another significant temple in the holy town of Varanasi, Kaal Bhairav Mandir was built during the 17th century and hence, it is of great religious as well as historical importance. Dedicated to Lord Shiva in the form of Lord Bhairav, this ancient temple is said to be the kotwal, the guard, of Varanasi as it is believed that one cannot stay within the boundaries of Varanasi without visiting this ancient temple and paying their respects to Lord Bhairava as a gesture of seeking permission.

Isn't it an interesting site? So, if you are curious to known about the local legends related to the formation of the temple, then you must pack your items and embark on a journey to Varanasi now.

Dedicated to Goddess Durga, this mesmerising temple was built during the 18th century by a Bengali queen. Durga Pond located adjacent to the temple helps in maintaining a cool and pleasant atmosphere, thereby, attracting thousands of Hindu devotees and tourists every year. The major festivals celebrated here include Durga Puja and Navratri.

Sankat Mochan Hanuman Temple is an ancient temple dedicated to Lord Hanuman, a form of Lord Shiva and an ardent devotee of Lord Rama, and was built by the saint Tulsidas on the banks of Assi river in the early 16th century. However, no strong evidence has been found related to its formation till date.

It is visited by thousands of Lord Rama and Lord Hanuman devotees every Tuesday and Saturday. So, how about planning a visit to this ancient temple where saint Tulsidas spent most of his life and penned down the holy text of Ramacharitamanasa?

Dedicated to Goddess Annapurna, an incarnation of Goddess Parvati and the symbol of food, Annapurna Devi Mandir was constructed during the early 18th century by Maratha Peshwa Baji Rao, who was one of the generals of the Maratha Empire.

The temple is known for its religious belief that anyone coming to seek the blessings of Goddess Annapurna with sheer dedication and devotion will never run short of food and nourishment in their life.

Therefore, it is visited by thousands of Hindu pilgrims coming from all over the state. Being one of the most popular temples in Varanasi, it remains flooded with devotees throughout the year. Built in Nagara architecture, the structural formation of the temple is also commendable.