Do Not Forget To Visit These Divine Temples In Hyderabad 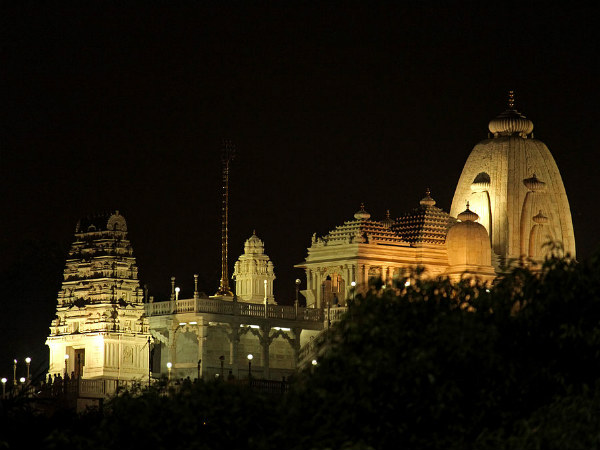 The city of Nizams and the land of the Charminar, Hyderabad is an enthralling destination for every traveller. Be it a history lover, a foodie or an architecture enthusiast, Hyderabad never ceases to surprise its visitors. Such is its popularity that it is frequented by people from all over the world. It is an undeniable fact that once you are in Hyderabad, you will be reluctant to leave its boundaries. After all, one gets to savour every kind of tourist spot here. So, this weekend, plan a trip to Hyderabad and indulge in exploring its beautiful temples, which are visited by thousands of pilgrims and tourists every year.

Some are these temples date back to several centuries and a few have their history stretching back to a few decades. However, irrespective of age and history, they are all set to charm you with their soothing and unearthly atmosphere.

Otherwise known as Visa Temple, Chilkoor Balaji Temple is located on the banks of Osman Sagar Lake in Hyderabad and is known for granting visas to its devotees. Yes, you read that right. Most of the devotees visiting the temple have problems related to their visa.

Once they encircle the main compound of the temple 11 times with utmost dedication and devotion, their wishes of getting a visa are fulfilled. It is also customary to encircle the temple 108 times after your wishes have been fulfilled. The temple is dedicated to Lord Venkateswara, another form of Lord Vishnu, and was built in the 14th century.

Another beautiful temple located in Hyderabad, Jagannath Temple is a newly built religious site which was constructed near Banjara Hills in the year 2009. Even though the temple is dedicated to Lord Jagannath, the lord of the universe, you can also find the shrines of Lord Shiva, Lord Ganesh and Lord Hanuman within the temple compound.

Like other Jagannath temples in the country, it is also famous for the annual rath yatra. If you are looking for a serene place in Hyderabad where you can feel the beauty of a peaceful and calm environment, then you must visit the compound of the Jagannath Temple.

One of the most popular and most visited temples in Hyderabad, Birla Mandir was constructed by the Birla Foundation in the year 1976 on a small hillock overlooking nearby settlements. The main compound of the temple is spread over an area of about 13 acres and is blessed with lush green vegetation, which in turn, helps in creating a peaceful and pleasant atmosphere.

It is built of white marble and is one of the few temples in Hyderabad which are open to everyone, irrespective of their castes, creeds and religions. The temple is dedicated to Lord Venkateswara and houses several shrines of Lord Shiva, Goddess Lakshmi and Lord Ganesh.

Built in the locality of Karmanghat in Hyderabad, this beautiful old temple was established in the 12th century by a Kakatiya king who found the idol of Lord Hanuman in a forest while he was hunting.

Several centuries later, during the period of the Mughal dynasty, several Muslim rulers tried to destroy the temple. However, they remained unsuccessful on account of God's grace. Today, the temple is still standing strong narrating its glorious past and is visited by hundreds of tourists.

Dedicated to Goddess Kali, the temple is named after two brothers - Akkanna and Madanna, who worked under the Qutb Shahi dynasty and built it in the late 17th century.

After their death, the temple remained an unknown part of Hyderabad until it was discovered and rejuvenated by locals. Today, the temple is one of the highly revered religious sites in the city. The major festivals celebrated here include Bonalu.

Another beautiful place where one can savour divinity, Ashtalakshmi Temple was built in the year 1996 and is one of the few temples dedicated to the eight forms of Goddess Lakshmi, the goddess of wealth. It was constructed over a period of five years and is a commendable piece of architecture. Get yourself to this gorgeous temple and find yourself lost in the fragrance of incense sticks.

Most Read: These Interesting Facts About Hyderabad Will Leave You Awestruck

Comments
Read more about: india travel tourism temples hyderabad pilgrimage weekend
Other articles published on Aug 23, 2018
We use cookies to ensure that we give you the best experience on our website. This includes cookies from third party social media websites and ad networks. Such third party cookies may track your use on Nativeplanet sites for better rendering. Our partners use cookies to ensure we show you advertising that is relevant to you. If you continue without changing your settings, we'll assume that you are happy to receive all cookies on Nativeplanet website. However, you can change your cookie settings at any time. Learn more
Change Settings Continue