Explore the Endangered at Tripura 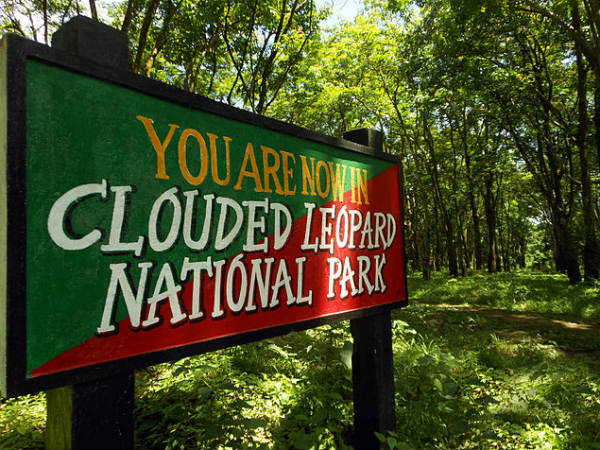 "What greater gift than the love of a cat," said Charles Dickens. Such is the affection and attention cats get; their antics and attitude are an entertainment. Talking of cats, there is one family of wild cats which are unique and are on the verge of extinction. Clouded Leopards with an unusual black and grey blotched pattern come from the Himalayan foothills and North East India.

The Clouded Leopard National Park in the Sipahijala Wildlife Sanctuary at Tripura is one of its kind in India. A section of the wildlife sanctuary houses the clouded leopards.

What are Clouded Leopards?

Surprisingly, Clouded Leopards are not leopards in spite of their name. They are the small versions of the big cat family with an amazing ability to climb the tree and jump to heights like any other cats. It is the dark blotchy patches with a unique pattern on its skin that has brought the name.

Sipahijala Wildlife Sanctuary with a dense vegetation is a haven for several species of birds and animals. Apart from the clouded leopards, Phayre's Langur and the crab-eating mongoose are the unusual species of animals found here. The Abasarika Lake, the Amrit Sagar Lake, Botanical Garden forms the prominent sections in the sanctuary.

Clouded Leopards are a common sight in the places like Mizoram, Sikkim, Meghalaya, Nagaland and Tripura. In some provinces, they are said to be extinct.

Sipahijala Wildlife Sanctuary is around 6km from the town of Bishalgarh. One has to reach Agartala and from there make a journey of 20km to the Clouded Leopard National Park.

Buses are available from Agartala to the Clouded Leopard National Park. Agartala Railway Station is the nearest one for the destination.

The months from mid-September to November is the best time to visit the national park.

Nature's creation is so beautiful and diverse. The fauna of the Himalayan region is full of surprises and the Clouded Leopards one such wonders of the region.

The Clouded Leopard National Park is created to protect the vulnerable species from the extinction. Don't miss out on visiting this unique destination in Tripura.