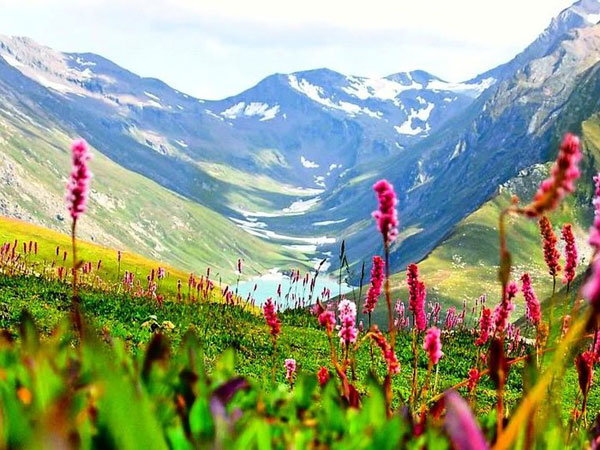 Amir Khusrao's words breathe life into the unadulterated natural charm of Kashmir. Kasheer, as pronounced by the natives, is dotted with gems of emerald green pastures, silver-white glaciers, golden sundowns over shimmering lakes and so much more to live and die for. Cradled in the lap of the Himalayas, Kashmir will leave you breathless (and not just because it is cold!) with its vast untamed wilderness and pristine snow-covered peaks.

Kashmir, a Himalayan utopia, has always been synonymous with romance and rebellion. Of late, the state has a whiff of Bollywood in its air. Several movies have been filmed in Kashmir - mirroring the place in a positive light by blurring out the endless violence and strife of the ongoing political unrest.

Bollywood's love for shooting at Kashmir's some of the most exotic locales is no secret. What is Bollywood without its visually alluring backdrops? Put a conventional location into a movie and it turns into a tourist spot all at once! A tourist's delight and a rhapsody for the soul, the state has always taken the filming experience to a whole new level.

We would highly recommend you to check into these stunning places, and embrace the dream-like, serene and culturally thriving Kashmir with its surreal Himalayan backroads, waterfront gardens, roaring waterfalls, apple orchards, glistening lakes and picture-postcard panoramas.

Imitiaz Ali's beautifully shot Highway, a labour of love, filmed painstakingly across six states of the country, serves up a slice of Kashmir in like manner. The Kashmir leg of shooting was filmed at the Aru Valley, a less exploited landscape, which is home to the tribes of the Bakerwalas and Gujjars. Aru Valley's stirring beauty is threaded with scenic vistas and hikes along lush green pastures as the glistening pahari nallahs flow down the valley, which makes you think that such beauty can exist beyond poems and imaginations as well.

Ayan Mukerji's Yeh Jawaani Hai Deewani had its fair share of criticism with passing off the swathes of silver white snowy meadows, cliffs and mountains of Kashmir as Manali. Per contra, the stunning trekking trip of the film was actually shot in the valleys of Kongdogri, which is one of the best-kept secrets of Kashmir. With the majestic Pirpanjal range in its backdrop, towering tall against the cerulean blue skies, Kongdogri is home to some lush green meadows nestled in an envelope of thick velvet of pine forests. The magic of this place bewitches you as time stands still and the snowy Himalayas look all demure cloaked in a veil of mist.

Betaab Valley got its name from yet another Bollywood flick, the Sunny Deol-Amrita Singh starrer Betaab. With the increase in footfall of the tourists in the state, the film crews always seem to return to the valley rekindling the old world charm and romance of the place. Excerpts of Imitiaz Ali's Rockstar bring to view the idyllic Betaab Valley. With the Lidder river curling up below the snow-blanketed valley, the soft lilting tune of the chirping birdies echoes all across the Betaab Valley.

It would be a sacrilege to not talk about Fitoor's beautifully captured fall at the Naseem Bagh, encapsulating the spirit of autumn in Kashmir. Settled on the west bank of Dal Lake, the Bagh is now in the Kashmir University campus. History has it, that in 1635, on the order of Shahjahan, work on this garden was started and on the same place, sometime after 1586, Akbar had laid out a garden. It is said that the university is to develop the Mughal garden of Naseem Bagh into a chinar heritage park. The entire bagh decks up in a plethora of colours of the vibrant chinar leaves. Colourful hues peeping out in all shades and glory, strewed all over the bagh, sure paint a picture for an eyeful.

Haider, the bonafide masterpiece of Vishal Bharadwaj, throbs with the chaotic calm of Kashmir's warmth. The film romanticises Kashmir with a pinch of everything Kashmiri. Sonamarg's restive state has served as one of the backdrops for the film. With meandering mountain brooks and snowy cliff tops towering tall against azure blue skies, Sonamarg, the 'meadow of gold', stands true to its name.