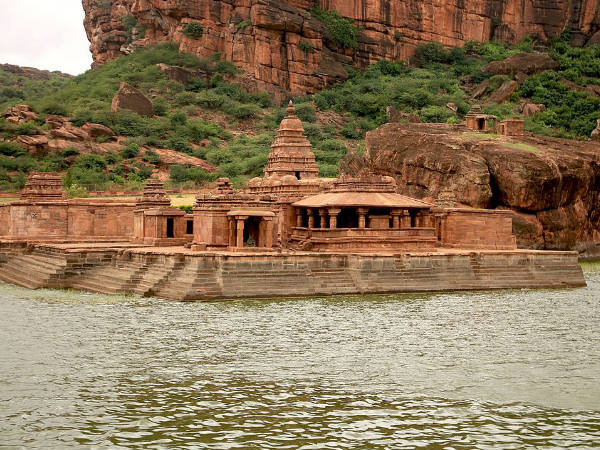 The land of Badami Chalukhyas mesmerises us to the core in Karnataka. The architectural legacies left behind by the Badami Chalukhya and Kalyani Chalukhya dynasties depicts a time of immense talent and passion for the temple architectures. The sprawling heritage complex comprises of several masterpieces that offer a lot to explore.

Bhutanatha Temples are located on the banks of Agastya Lake which acts as an additional feature.

History of Bhutanatha Temples in Badami

Interestingly, here we can see the two temples belonging to two different kingdoms. Yes, the main Bhutanatha Temple is a masterpiece of Badami Chalukhyas whereas the Mallikarjuna Temple belongs to Kalyani Chalukhyas.

Infact, the outer wall of the Bhutanatha Temple is said to be completed by Kalyani Chalukhyas. Hence, we can see a 7th century architecture and a11th century construction at one site.

The Bhutanatha Temple Complex almost extends to Agastya Lake. Lord Shiva along with his mount Nandi can be seen inside the temple. However, it is said to be dedicated to some other God before the advent of Shaivism. Curiously, Jain sculptures can be found at the base of the temple Shikara (gopura-temple tower). So, there has been speculation regarding the original deity of this shrine.

The Mallikarjuna Group of Temples is situated just behind the Bhutanatha Temple and this shrine is also dedicated to Lord Shiva. The pyramidal type of Shikaras (super structures), open mantapas and plain walls depict the features of Kalyani Chalukhyas.

Visitors need more than one day to explore the heritage of Badami. Each building has something unique and interesting to explore. The Bhutanatha Temples are one of the most interesting shrines in Badami.

To Know More About the Other Attractions of Badami

How to Reach Badami

Badami is around 100km from Dharwad. It can be covered on a heritage circuit of Badami and Aihole in Karnataka.

It is not just the historical places but the lush green landscapes of Badami makes it worthwhile to visit. Visit during October to February as it is the best time to visit Badami.

Comments
Read more about: temples heritage badami karnataka
Other articles published on Dec 21, 2016
We use cookies to ensure that we give you the best experience on our website. This includes cookies from third party social media websites and ad networks. Such third party cookies may track your use on Nativeplanet sites for better rendering. Our partners use cookies to ensure we show you advertising that is relevant to you. If you continue without changing your settings, we'll assume that you are happy to receive all cookies on Nativeplanet website. However, you can change your cookie settings at any time. Learn more
Change Settings Continue