Nativeplanet
»
Travel guide
»Here’s Why Badami In Karnataka Needs To Be Next On Your Travel List!

Here’s Why Badami In Karnataka Needs To Be Next On Your Travel List! 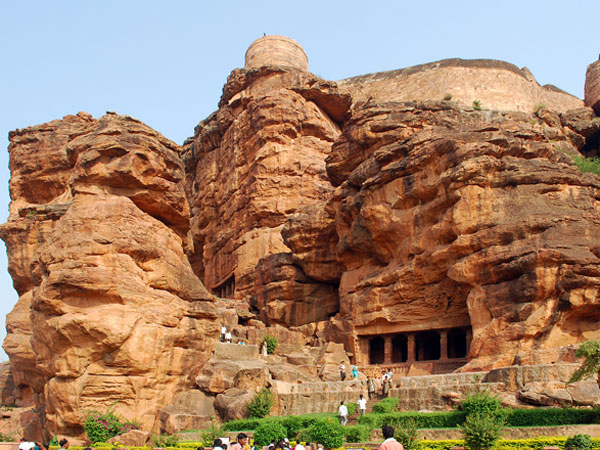 When it is Badami we are talking about, it is present in the Bagalkot district of Karnataka. It is quite famous for its perfectly shaped rock temples. Along with the enchanting Badami Cave temples, the Badami Fort can also be given prime importance. Popular tourist attractions also include the Agastya Lake as well as the Archaeological Museum. Even the Bhoothanatha temples shall be a treat to the eyes. Heard about the river Malaprabha? Aihole present there is a wonderful place to visit in Badami. When you talk about the appealing rock-cut architectural style, Badami is the abode to many such temples present here.

How about referring to Badami via its mythological name Vatapi? It has remained the proud capital of the Badami Chalukyas from 540 AD to 757 AD. But the question still remains as to how it became the capital of Vatapi. After the Chalukya empire gained prominence in the year 500 AD, the Chalukya King Pulakeshi resorted to building a fort at Vatapi and roped it in as the capital of the kingdom.

The Badami Chalukyas built a lot of monuments which one can feel proud of, those which are of magnificent architectural stature. The Dravidian architectural styles presented in the buildings are also quite impressive. Badami was under the control of numerous kingdoms and dynasties, such as the Vijaynagar Empire, Adi Shahi Dynasty, Mughals, Marathas, Mysore Kingdom as well the British.

How To Reach Badami

By Air: The closest airports to Badami are Hubli (some 106 km) and Belgaum (some 150 km). These airports are well-connected to Mumbai and Bangalore. Once you reach Hubli or Belgaum, Badami can be reached via a taxi or a bus.

By Rail: The 'Badami Railway Station' is quite nearby to the 'Badami Bus Stand' which is at a distance of some 5 km. There is strong rail connectivity from Bangalore, Hubli, Bijapur, Gadag, Solapur as well as a few other cities. The closest rail junction shall definitely be Hubli and it has strong rail connectivity with major cities across India. You can directly avail a train to Badami from the Yashwantapura Junction of Bangalore. Let me help you with a few train station codes which shall help you: Badami Train Station Code (BDM), Hubli Train Station Code (UBL) and Bangalore Train Station Code (SBC).

By Road: It is strongly connected via roads. Badami can be traversed via road connectivity from Hubli, Dharwad, Belgaum, Bangalore, Bagalkot, Hampi, Bijapur and a lot of other cities. Numerous govt. and private buses can be availed from Bangalore, Hubli, Belgaum and Bijapur. Another means of local transport is horse cart and Tonga's which are readily available in the city as well as auto rickshaws too.

A very good time to visit Badami shall be between July to March. The temperature changes during the entire year are not too much and are quite minimal. Winters in Badami are mild in nature and the range of rainfall swings between average to heavy in the merry monsoon season.

How about counting down to all the places one can see!

Tourist Places Of Attraction In Badami

The credit for the fabulous temples goes to the Badami Chalukyas in the 6th and 7th centuries. Do you know how these Badami Cave temples were built? They were intricately designed from a magnanimous sandstone cliff which is situated in the city itself.

When you choose the sandstone from the cliff, it is the perfect choice for carving purpose and the cave temples are the most stunning examples of the Badami Chalukya architecture. Where are the temples present? They are located in between ravines and comprise massive cliffs in the vicinity. Let's talk about the architecture which is a fine mixture of the north Indian Nagara and the south Indian Dravidian.

Nevertheless, we can delve into details about the four cave temples present in Badami. The first cave which shall take around 40 steps for you to cover is purely devoted to Lord Shiva. It is bedecked with around 81 sculptures of Lord Shiva who has taken the shape of 'Nataraj' and consists of 18 arms. Shining proudly in red sandstone, the cave flaunts a hall with several columns and a sanctum, an open verandah as well as ceilings and pillars decorated with paintings of ardent couples.

Can you spot yet another cave on the peak of a sandstone hill? This is the second one which is solely in praise of Lord Vishnu who is deemed as the conservator of the Universe in accordance with the Hindu beliefs. Here, the Lord is pictured like a dwarf or 'Trivikarma' where he puts one foot down on the ground proclaiming control over the earth while the other foot is ruling over the sky.

Then comes a third cave temple whose front side is approx. 70 ft. wide whereas the platform is adorned with depictions of 'ganas'. When it comes to expressing views about the Deccan style of architecture, the shape of the temple reflects the perfect style. The various forms of Lord Vishnu are exhibited here which comprise Narasimha, Varaha, Harihara and Trivikarma. Plus his huge idol alongside that of a serpent attracts a lot of attention.

The fourth cave temple is unwaveringly loyal to the Lord Mahavira, who is the 24th Tirthankara of the Jains. This temple found its very origin in the 7th century, nearly 100 years after the previous caves came into existence. You shall definitely spot Lord Mahavira's shrine in a sitting position.

Also, there is an entry fee charged for individuals visiting this place. It is free for children up to 15 years of age while it is chargeable at the rate of INR 10 for the rest. For foreigners, it is INR 100.

The temples were constructed out of soft sandstone which is quite popular in this particular region and was simply built by Badami Chalukyas in between the 7th and 11th centuries AD. When it comes to showing devotion to the Hindu goddess Bhutanatha, a bunch of shrines is exclusively booked for him who is also lovingly known as our dearest Lord Shiva.

The temple area is an exemplary show of the marvellous Badami Chalukya architecture which is a beautiful blend of the North and South styles! Be it the stone sculptures or the structures carved out of stone, it shall leave you speechless for sure!

You shall be glad to know that this group of temples is present right next to the Bhutanatha Group Of Temples. These unique structures stand out from the rest due to their pyramidal shape and their origin dates back to the 11th century, where it was built by the Badami Chalukyas.

Why should you be visiting this age-old fort constructed by the Chalukya King Pulakeshi in 543 AD which is in complete ruins? The place shall leave you mesmerized by its picturesque surroundings and exotic location of the fortification. Then came the Pallavas in 642 AD and the fort was destroyed totally. You shall be lucky enough to only spot the walls of the fort as well as the remainings of the architecture which is quite mind-blowing. The fort, located atop the cave temples, is closed for public due to some past unfortunate incidents. You can however, visit the office and acquire a special permit to visit this spectacle.

Have you cast a glance at the ravishing lake Agastya? This Malegitti Temple constructed right above the Shiva Temple shall give you a gorgeous view of the glittering water body. The Shiva Temple was built in the 6th century AD and is one of the most ancient temples in Badami.

This grand capital of the Chalukya kingdom, Badami, is a fantastic tourist place of attraction in Karnataka. Quite a large number of archaeological findings and monuments that go back to that time period of the Majestic kingdom are definitely to be visited!

You shall surely stumble upon the archaeological museum which is just a kilometre away from the Badami Bus Station and is located at the footsteps of the Badami Fort, on the northern side of Lake Agasthya. The museum is a treasure-house of many interesting artefacts, such as stone implements, architectural parts, inscriptions and sculptures which range from the 6th to the 16th century AD. You shall be warmly greeted by Shiva's bull near the museum gate. What all does the museum brag about?

Four galleries, an open-air gallery in the veranda as well as in the front side. Local sculptures are fabulously represented with the most notable ones being the Krishna panel as well as a few other panels consisting of segments from the popular epics of Mahabharata, Ramayana and the Bhagwad Gita. Do not miss out on the replica of a pre-historic cave as well as many faded murals present in cave number 3. Sadly, you cannot exhibit your photography skills in this museum and it usually remains closed on Fridays. Timings of this museum are 9 AM to 5 PM.

This temple is situated in Cholachagudda at a distance of about 5 km. It is devoted totally to Banashankari Devi, who is an embodiment of Goddess Parvati and the temple is quite popular around that district too. Do you know what is the most alluring scenery here?

The presence of Haridra Tirtha, a magnanimous temple pond with a high lamp tower constructed on a three-story structure and located right adjacent to the temple. It is a wondrous sight to watch and a corridor is present in its vicinity which is totally carved out of stone! Let us present to you a visual of what you shall be seeing there.

The Goddess is perched on a ferocious lion and she is trampling upon a demon below her feet. The goddess is entirely sculptured out of shiny black stone and she also features eight arms. The main compound accommodates three huge lamp polls which sparkle and grace all exceptional events and celebrations.

The annual festival taking place during the months of January and February pulls a lot of the crowd. You can spot a deity seated on the chariot alongside a procession to make the festival season all the merrier! Make sure to make plans to visit this temple between 6 AM to 1 PM and 3 PM to 9 pm.

At a distance of about 14 km, a brilliant place nurturing the Shaiva cult, Mahakuta is a lovely place bordered by hills. It is popular for the Mahakuteshwara Temple which is built in the faith of Lord Shiva. The temple exhibiting Dravidian style has numerous shrines in its close proximity. Take note of the mesmerizing bas-relief works and carvings of great artistic astuteness on the temple walls. Also, the Vishnu Pushkarni which is close to the Mahakuta Temple is a spring pond which shall splash your soul with drops of joy.

Just a kilometre away from the Badami Bus station, there is a lake present which was built way back in the 5th century. It is believed to possess magical healing powers whereas the eastern banks of the Agasthya Lake are bedecked with Bhootanatha temples whereas the southwest part focuses on the cave temples. If we give some importance to the Pushkarini, it was delivered here by Garuda, the means of transport of Vishnu. Just a dip into this holy water and all your sins are supposed to fade away!

But would you believe it that the village folks use the lake to wash their clothes and take a daily bath? However, it is not the ideal place for swimming but you can capture in your camera 'memories', the beautiful views of the gorgeous hills which are underlined by several historical monuments.

So Badami! Here we come! 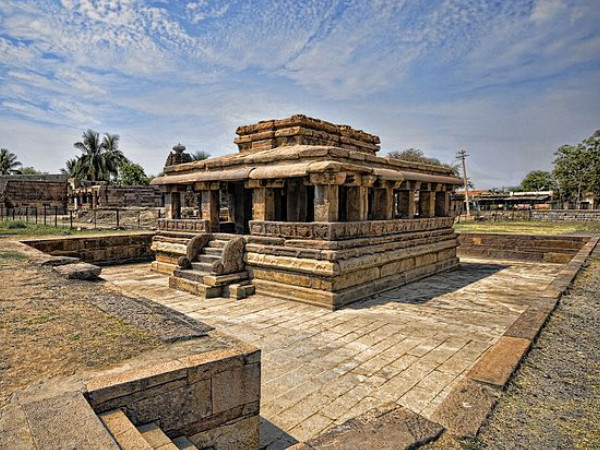 Travel to the Chalukyan Town of Aihole