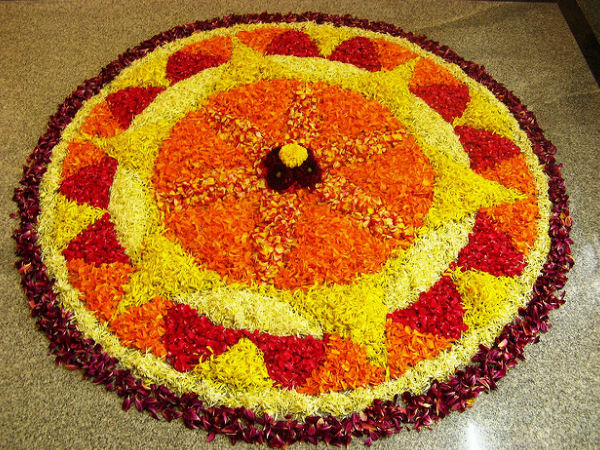 August comes on a happy note with delightful weather and a lot of festivals. Every year, Indians rejoice festivals with joy and lustre. Events also get lined up as festivities come around and people look for various plans to extend their weekends. And traversing across India in August can be a good decision as one can observe loads of festivities and culture on exhibit.

Nativeplanet brings you the list of festivals and events that is commemorated in August 2020 in India. Have a look!

This is a 10-day long harvest festival which is celebrated in Kerala with much vigour. The festival is known for celebrating the homecoming of the mythical King Mahabali. During this festival, the locals decorate the entrance of the houses with flowers arranged beautifully. Alongside that, it is celebrated with other festivities like buying new clothes, and a plethora of dishes served on a banana leaf.

Celebrated along with the Onam festival, Athachamayam is one of the most iconic cultural festivals in August 2020, India, that rejoices the heroic triumph of the royal king of Kochi. This is one of the most vibrant festivals in August in India, actually, Kerala, where local people wear a traditional outfit and participate in folk dance and music. Elephant rallies and colourful tableaus showcasing local tradition, art forms, and culture are also seen during the festival.

Among the age-old Indian festivals in August, Nag Panchami holds a special significance. This is one of the most unique and courageous festivals in August in India where snakes are worshipped. On an auspicious day of the lunar month of Shraavana, Nag Panchami is observed in full glory and pomp in rural parts of India and Nepal. This festival is followed by Japan Mela- a tribal festival, where Goddess Manasa is worshipped. Jhapan Mela is a rural fair demonstrating various tricks with snakes and is observed in the interior parts of Vishnupur and Bankura districts of West Bengal.

On every full moon day of the month of Shraavana, which corresponds with August, the glorious festival of Raksha Bandhan is celebrated throughout India. Undoubtedly, this list of Indian festivals in August is not complete without talking about Raksha Bandhan. It is rejoiced to honour the love and bonding between a brother and a sister. The sister ties the rakhi- a sacred thread around the brother's wrist and prays for his long life and well-being while the brother takes an oath to protect her lifelong.

Festivals celebrated in August in India are incomplete without Teej, where Goddess by the same name is worshipped by Rajasthani women with full enthusiasm. This is one of the music festivals in August 2020 in India. Featuring absolute grandeur and glory, Teej is rejoiced in every part of the pink city, with traditional songs, dance, music, carnivals and local food. Here, native woman dress-up in green traditional outfits, wear bangles and mehndi and carry Goddess Teej in golden palanquin across the city. The rally is accompanied by decorated elephants, camels, and horses.

22 August is the foundation day of the city of Madras, now Chennai. To honour and celebrate the same, the entire week rejoices with grandeur and pomp in the city. The entire city is decorated with lights and flowers and various tours, fairs, shows and recreational events are organized for tourists and locals.

Another spectacular August festival is Tarnetar fair, held near the temple of Triniteshwar Mahadev in Gujarat. The fair was originally organized as a searching place for a spouse for tribal communities. This is a typical rural fair, where one can see and experience brave stunts, magic shows, tribal dance and music, camel rides tattoo stalls, merry go rounds and local food and handicrafts shops.

This festival is celebrated on a grand scale in India and some parts of the world to commemorate the birthday of Lord Krishna. The day is also called the Gokulashtami in some places and Maharashtra, it is known as Govinda. This is one of the joyous occasions celebrated with much vigour and some kids dress up like Krishna to narrate his life story.

This is an annual festival which is celebrated every year on the fourth Saturday of August. It is a traditional flag festival which started from the disputes over the property in various parts of the village. There were flags used to mark boundaries until the rival groups knocked them down. In the present day, they make a representation of that incident by hosting mock fights and street parades.

Comments
Read more about: august india festivals events
Other articles published on Jul 28, 2020
We use cookies to ensure that we give you the best experience on our website. This includes cookies from third party social media websites and ad networks. Such third party cookies may track your use on Nativeplanet sites for better rendering. Our partners use cookies to ensure we show you advertising that is relevant to you. If you continue without changing your settings, we'll assume that you are happy to receive all cookies on Nativeplanet website. However, you can change your cookie settings at any time. Learn more
Change Settings Continue