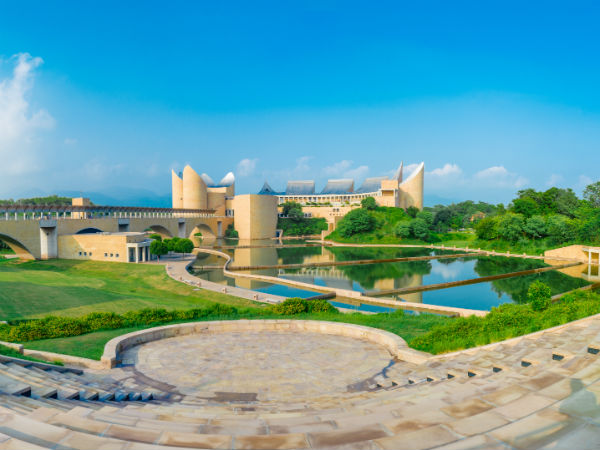 Khalsa was born as a group of Sikh warriors and a community that follows Sikhism. It was established in the 1699, by Guru Gobind Singh, the birth of which is celebrated till date during the festival of Vaisakhi. This massive community was born at Anandpur Sahib, Punjab. This is where you can visit Virasat-e-Khalsa, a unique museum that showcases the rich heritage of the Sikhs.

Anandpur Sahib is located at a distance of 83 km from Chandigarh and 192 km from Amritsar and was built 300 years after the birth of Khalsa in order to commemorate the 500 years of rich history of Sikhism. Here's why you must definitely visit the museum to gain a significant knowledge about the history of Sikh heritage.

The museum is spread across a huge area of 100 acres. It is home to the second holiest Sikh shrine, which is the Takht Keshgarh Sahib. In this shrine you may witness actual weapons and swords. The museum is also known as the Khalsa Heritage Centre.

At first sight, the museum might seem like an abstract piece of art. But with a deeper observation it gets clear that the building is actually in the shape of hands offering prayers. The space consists of two complexes and is connected only through a ceremonial bridge.

On the western side of the complex, an auditorium that can accommodate up to 400 people is present along with an enormous exhibition gallery and a library that consists of important magazines, books, etc. that are on or related to Sikhism.

The east complex is home to exhibitions that showcase the history, culture and traditions of Sikhism. The galleries are, in fact, in a cluster of five in order to signify the five virtues of Sikhism. The museum's towers are made of sandstone and have dramatic sweeping roofs and other such unique architecture that symbolises themes of sky, earth, light, etc.

Other Places To Visit In Anandpur Sahib

Since it is the birthplace of Khalsa it is now an important pilgrimage site for Sikh devotees. The city is spread with numerous gurdwaras and forts and is also the place where Vaisakhi is celebrated with absolute grandeur.

A festival called Hola Mohalla or simply Hola that takes place in March is a huge event for Sikhs around the world. Anandpur is the biggest venue for this festival with thousands of pilgrims pouring in during this season.

Some of the gurdwaras that you must visit at Anandpur include Gurudwara Sis Ganj Sahib, Gurudwara Thara Sahib, Gurudwara Bhora Sahib, to name a few. Visit the five forts built on the borders of the city by Guru Gobind Singh, the revered 10th Sikh guru.

How To Reach Anandpur Sahib

By Air: The closest airbase to Anandpur is the Chandigarh airport, which is located at a distance of 65 km from the city. It connects to major cities of India like Bangalore, Hyderabad, Delhi, etc.

By Train: Anandpur Sahib has a railway station that is connected to many cities like Jaipur, Haridwar, Delhi, etc.

By Road: Anandpur Sahib is well connected by road to its neighbouring cities, like Amritsar, Chandigarh, etc., and state government buses are available in plenty to get to the city.