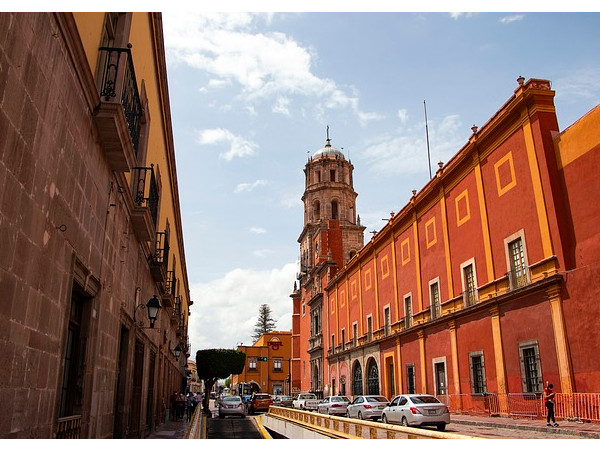 Santiago de Querétaro is the smallest city in Central Mexico. It is known simply as Querétaro City. The city was founded by Otomi Indians and was incorporated into the Aztec empire in 1446. Queretaro City is famous for well preserved historic center and was declared a UNESCO world heritage site in 1996.

The city of Queretaro is currently considered as an excellent example of a Spanish colonial city. Visiting Santiago de Querétaro might be that missing piece in your bucket list. This place gives out a vintage aura and also 'something to do with the ancient people aura' making it just the perfect travel destination in Mexico.

The Mexican Constitution of 1917 was written in Querétaro, and not only that, this city was the birthplace of Mexico's Institutional Revolutionary Party in 1929. Central Querétaro has retained its narrow, twisting, colonial-era alley ways of stone streets in a grid pattern. I would call this the best travel destination in Mexico. The city is famous for indigenous craft items, lively pubs, historic public buildings and in fall festivals.

Ultimate Things to do in Santiago de Queretaro

One of Mexico's oldest and largest cotton mills is located in Querétaro, which also produces textiles, pottery and processes crops from its agricultural hinterland. The Autonomous University of Querétaro (1951) and the Regional Museum of Querétaro (1936) are located in the heartland of the city. Queretaro is famous for its historical structures and all things Spanish! Read along to know more.

The Historic Monuments Zone is what makes the city famous. The unique spanish architecture from the 1700's still remains intact and well-preserved today. This place makes for a beautiful setting to simply stroll around and explore. Within the 204 city blocks, across 4 sq.

kilometers, there are a total of 1,400 designated monuments. That's a lot of monuments! In the words of UNESCO itself, "The old colonial town of Querétaro is unusual in having retained the geometric street plan of the Spanish conquerors side-by-side with the twisting alleys of the Indian quarters."

Some important monuments you will encounter are -

Fuente de los Perritos - The puppy fountain dedicated to the benefactor of Queretaro.

Become a Museum Grasshopper in Queretaro!

Okay, there is nothing such as a museum grasshopper. I made it up but. The city of Queretaro will transform into one with it sea of museums across the city. For a city with so much history, I think its pretty obvious. With many historic, arts and some rare type museums can be found in Queretaro. The city is a history buff's wonder of the world. Some of the note worthy museums in the city are -

Vermin Museum - A peculiar museum in Queretaro. I won't tell you what is in it. It's a surprise!

Calendar museum- this museum will take you back in time. The museum is all about time! It displays the intricate ancient Aztec time-keeping devices to vintage calendars spanning the past few decades.

Museum of the city - The museum is not about the city at all. Instead there are art work which are artistic, humorous and interesting.

Art Museum of Queretaro- This museum is worth all your time and energy. The museum is a former monastery. It displays some lesser known facts about Queretaro and amazing paintings.

Museo de la Casa Zacatecana - This mansion of a museum displays period furnishings showing of what wealthy life was like in 19th-century Queretaro. The thrilling journey through this mansion hides a tale of murder.

Hike one of the World’s Largest Monoliths: Peña de Bernal

Sitting majestically in the small colonial town of Bernal, where a massive rock sprouts right up from the ground. The Pena de Bernal is a spectacular sight to see. It is the largest of its kind, among the other famous monoliths like Australia's Ayers Rock and the Rock of Gibraltar towering just behind it. many tours and climbing trips offers a guided hike on the gigantic monolith. If you are there for a 2 days, you must try this rock for a day!

There are a dozens of church in Queretaro. This one serves are the most beautiful and ethnic one of them all. With no offence to the Lord, I only take the interiors of the church seriously. The interior of Templo de Santa Clara another one is almost dripping with gold from floor to ceiling, making it the perfect spot to click a perfect instagram pic. And then there is Templo y ex-convento de la Santa Cruz which has history with thorns and apparently some thorns grow in a cross shape here.

So as you can see, Pyramids are not only in Egypt. Central Mexico hides them too. The pyramid of El Cerrito dates back to around 700-900 AD and was used as a place of worship among Mesoamerican civilizations for a millennia! To look in a laymen's eye it almost looks like the Chichen Itza. This partially excavated pyramid rises up from the platform to almost 10 stories high (30 meters). Exploring the site makes it one of the most interesting things to do in Queretaro.

The City of Querétaro lies at the junction of major railway lines to Mexico City, to which it is also linked by highway and air.

Comments
Read more about: mexico
Other articles published on Jan 16, 2023