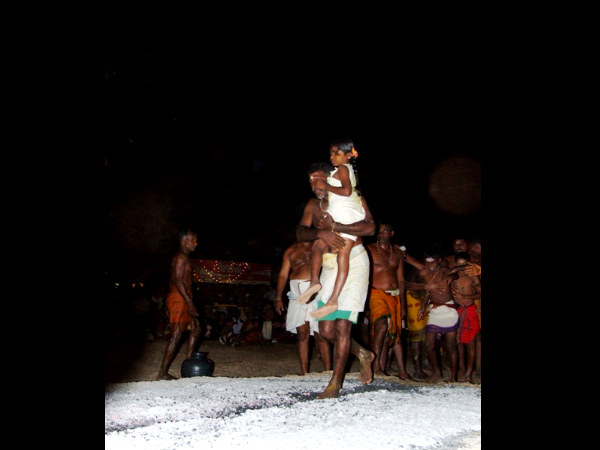 Tamil Nadu is a land of traditions and customs, From the endless list of temples to the unique festivals celebrated here, there are many aspects of the state that are worth to explore. Thimithi is also a part of the rare culture of the state.

Let's see why and how this festival is celebrated. The festival is believed to have its roots from the times of the Hindu epic, Mahabharata. As per the epic, the Pandavas had lost their land, wealth and even their wife Draupadi to the Kauravas in the game of dice.

Duryodhana, the eldest of the Kauravas, wanted to further demean Pandavas and asks his brother Dushasana to strip Draupadi in the court. Though Lord Krishna comes to her rescue, Draupadi takes a vow that she will comb and tie her hair only after smearing it with Dushasana's blood.. This was followed by the great Mahabharata war. It is also believed that after the war, Draupadi had to walk on a bed of burning coal and come out unhurt, to prove her innocence. Thimithi is a festival celebrated to commemorate this event.

Draupadi is worshipped as Draupadi Amman by a community of Tamilians known as Draupadi Amman cult. They consider Draupadi as their village Goddess and the rituals and festivals related to the Goddess is strictly observed. One such village in Tamil Nadu is Kondal in Nagapattinam district, where Draupadi Amman is their 'Kula Devatha' or village deity. Thimithi is a festival celebrated here.

Apart from Kondal, there are several other Draupadi temples spread across Tamil Nadu and Karnataka. Interestingly, devotees of the Goddess celebrate Thimithi in countries like Srilanka, Singapore, Malaysia, Mauritius and South Africa where a major part of the Indian population consist of Tamilians.

The festival is celebrated during October-November. Here's how you can reach Nagapattinam. From here, you can hire a taxi to the temple if you wish to be a part of the celebrations. Devotees walk on the burning coal bare-foot to seek Draupadi's blessings.

Travel to the land of cultural diversities and witness one of the strangest festivals you will ever come across, Thimithi!

Comments
Read more about: tamil nadu travel india festivals culture
Other articles published on Oct 20, 2016
We use cookies to ensure that we give you the best experience on our website. This includes cookies from third party social media websites and ad networks. Such third party cookies may track your use on Nativeplanet sites for better rendering. Our partners use cookies to ensure we show you advertising that is relevant to you. If you continue without changing your settings, we'll assume that you are happy to receive all cookies on Nativeplanet website. However, you can change your cookie settings at any time. Learn more
Change Settings Continue