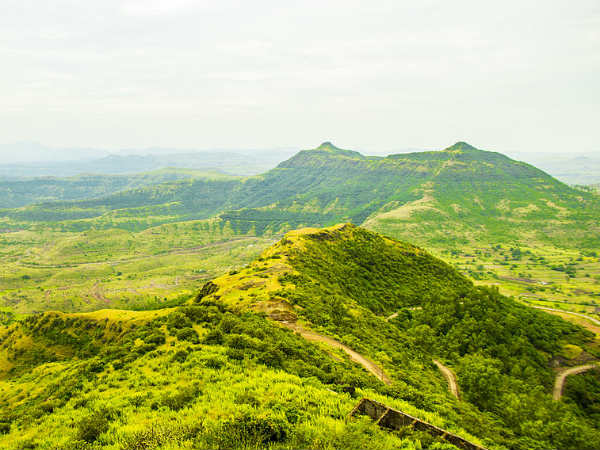 If there is any place in India which is home to a maximum number of hill forts, then it is certainly Maharashtra. These hill forts not only cater to the needs of history lovers but also to the desires of adventure enthusiasts. So, if you are one amongst those adventure-loving travellers, then you must plan an expedition of exploring the beautiful and towering hill forts of Maharashtra. One such fort which overlooks the small hamlets and lush greenery of Maharashtra is the historic Purandar Fort. This ancient fort is equally popular for its historical significance. Let's move ahead and learn in detail about the history and the natural surroundings of the fort and how to reach it.

The region in and around Purandar Fort experiences a bearable climate throughout the year, and hence it is a year-round destination. However, if you desire to avoid the summer heat of Maharashtra and explore the beauty of the fort in a comfortable atmosphere, then the best time to visit is from October until the end of February. This is the period when the natural beauty in and around the region of Purandar Fort is at its peak.

The History And Surroundings Of Purandar Fort

Located at a distance of about 40 km from Pune in the lap of the Western Ghats, Purandar Fort is said to be the birthplace of the great Sambhaji, the son of Chhatrapati Shivaji Maharaj and the second ruler of the Maratha Empire. Therefore, the fort has been a significant site amongst history lovers.

As per records, it was built in the 11th century during the reign of the Yadava dynasty. Later on, it was ruled by several other dynasties including the Marathas and the British. In accordance with Hindu mythology, the hill atop which the fort is located is said to have been brought by Hanuman from the Himalayas.

On account of being a hill fort surrounded by lush greenery, it has also captured the attention of trekkers and campers. Today, Purandar Fort is a weekend destination for trekkers, campers and history lovers.

Why You Must Visit Purandar Fort

Wouldn't you love to trek up a hill and spend a few relaxing hours as you savour the panoramic beauty of the Western Ghats? If yes, then Purandar Fort should be your stoppage this weekend. As it is a place of historical importance, you can also find the ancient Purandeshwar Temple, after which the place is named and a statue of Murarbaji Deshpande, the general of the Maratha Empire.

Do not forget to bring your camera while coming to Purandar Fort as it is one place which can provide you with the best of natural frames. Did you know that the fort is also used as a paragliding spot? So, every adventure lover out there, Purandar Fort is your calling.

How To Reach Purandar Fort

By Air: The nearest airport to Purandar Fort is located in Pune at a distance of about 45 km. Once you have reached Pune, it is better to hire a direct cab or use public transport, such as sharing vans or autos, to reach the base of the fort. You need to trek up the hill to reach the fort.

By Rail: Pune railway station is the major nearest railhead to Purandar Fort. You can catch a direct train to Pune and then from there, you can hire a cab to reach the fort region.

By Road: The base of the fort is well connected to other towns and cities by road.