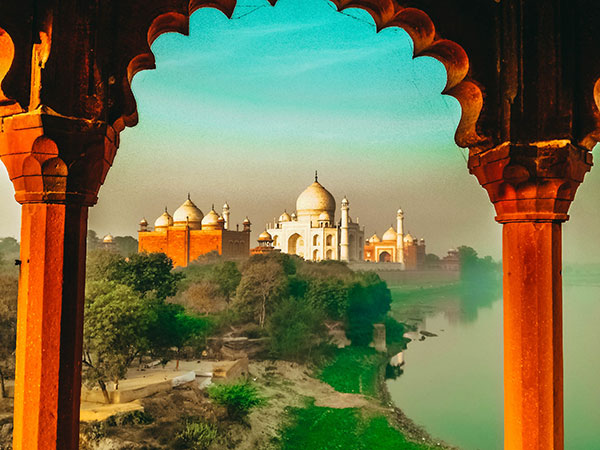 Monuments always stand as a reminder of historical significance. Crafted and built as epitaphs of undying commitment and love, here are some of the most time-tested forts and palaces of the country that formed the backdrop of some exceptionally romantic histories. Bearing witness to some of the most epic stories of love, loss and longing, these historical monuments put you in a time warp through its worn out walls that bore witness to some of the most tragic and eternal love stories. Soak in the aura of the bygone days and reflect on the nostalgic shade of history that colours the walls and doorways of these majestic fortifications.

A sublime ethereal beauty, there's no mausoleum or an epitaph of love more grand and majestic than the Taj Mahal. The marble-clad marvel was built by Mughal emperor Shah Jahan between 1631 and 1648 as a mausoleum for his beloved wife Mumtaz Mahal, who died in childbirth. The cenotaphs honouring Mumtaz Mahal and Shah Jahan lie within the stunning mausoleum, in a quiet room below the floors of the mausoleum, at garden level. However, the counterfeit imitation of the real sarcophagi of the cenotaphs lie in a gorgeously enclosed eight-sided ornamented chamber with pietra dura inlay and a marble lattice screen.

Dating back to the 7th century, the Chittorgarh Fort is not just one of the largest forts in India but also a UNESCO World Heritage Site. The main attraction of the monument is the three-storeyed pristine white Rani Padmavati's Palace built on the banks of a lotus pool. With a sheer delicacy of design and beauty of the striking milieu it is set against within the fort. The fort itself is ornately crafted with intricately carved Jain temples, decorative pillars, reservoirs, underground cellars and a lot more exquisite architectural exhibits.

The majestic Chittorgarh Fort is symbolic of the epic love story between Rani Padmini and Raja Ratan Rawal Singh. The king won Rani Padmini's swayamvar with lots of trials and adventure and brought her to the Chittorgarh Fort as his beloved queen. The fort walls resonate with the tales of their legendary love story. Visit the place and soak in the grandeur and history of the fort.

Perched on a picturesque plateau, the Roopmati's Pavilion is the most significant amongst all the heritage and historic architecture that dot the town of Mandu. Standing at the top of an escarpment falling 366 m to the plains, the Roopmati Pavilion has the most interesting and alluring architectural aspects, with square pavilions, giant hemispherical domes and scallop-shaped intricate arch openings. From its terrace and domed pavilions, the Roopmati Pavilion blesses its visitors with the distant glint of the sacred Narmada river, flowing down the hills, 366 m below.

Mandu is popular for the legendary love story of Prince Baz Bahadur and Rani Roopmati. Sultan Baz Bahadur, the last independent ruler of Mandu, fell in love with the mellifluous voice of Rani Roopmati, the Queen of Malwa. The ruler blinded by love, asked her hand in marriage but Rani Roopmati acquiesced with one condition, that only if the king builds her a palace from where she could see her beloved Narmada river, she will marry him. The Roopmati's Pavillion hence came into existence and this architectural marvel bears witness to their eternal love story.

The Shaniwarwada Fort, erected by Peshwa Bajirao in the year 1730, with its now worn out and rustic interiors bore witness to many historic events. The pride and honor of Pune, the Shaniwarwada Fort has been home to the beautiful second wife of Bajirao I, Mastani. Peshwa Bajirao's family refused to accept Mastani as his legally wedded wife due to differences in their religious allegiances. Hence, Bajirao built the Mastani Mahal in the Shaniwarwada Fort, where she stayed. Though the palace of Mastani has been dismantled and doesn't exist anymore, traces of it can still be sighted in the mahal. A doorway named after her can still be sighted at the fort with a small notice on it, that reads "Mastani Darwaza, which is mentioned in old records as Natakshala Gate, was named after Mastani, the beautiful second wife of Bajirao who was from Bundelkhand."

Comments
Read more about: architecture history travel tips
Other articles published on Mar 8, 2019
We use cookies to ensure that we give you the best experience on our website. This includes cookies from third party social media websites and ad networks. Such third party cookies may track your use on Nativeplanet sites for better rendering. Our partners use cookies to ensure we show you advertising that is relevant to you. If you continue without changing your settings, we'll assume that you are happy to receive all cookies on Nativeplanet website. However, you can change your cookie settings at any time. Learn more
Change Settings Continue