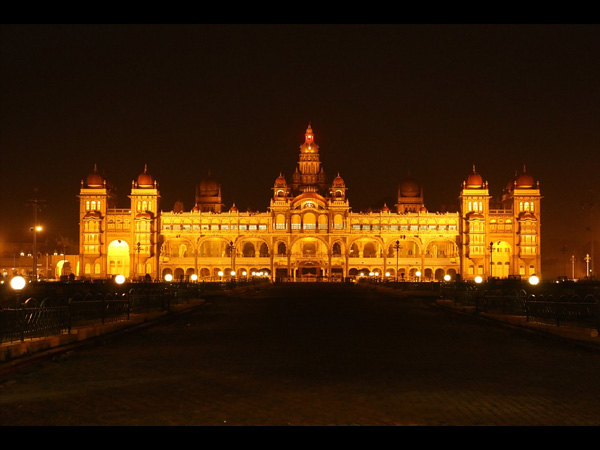 Mysore is truly a spectacle to witness during Dasara. The history of Mysore Dasara goes back to Vijayanagara era, and even to this day, it remains a major crowd puller, attracting people from all walks of life. And because it is the most visited state fair, Mysore Dasara is proclaimed as 'Naada Habba' in Karnataka. The core of the festival is the triumph of good over evil. Mysore Dasara is dedicated to the Goddess of Mysore, Shri Chamundeshwari Devi; synonymous with the city.

Mysore transforms into a funfair during Dasara, boasting Jamboo savari, Mysore Palace, food carnival, military parades, athletics and abounding list of events. It is one of those cities that will leave you with lasting memories because it imbibes the culture of Karnataka in every sense.

Here are a few key attractions of Mysore Dasara:

Mysore Dasara is celebrated with pomp and grandeur since its inception in the 16th century by the Vijaynagara Dynasty. Even to this date, the scions of the Vijayanagara empire uphold the tradition by orchestrating the big event in Mysore. The Dasara procession begins in Mysore palace and ends at Bannimantap grounds. You can witness carnivals showcasing colorful attires, dance groups, music bands, military parades, folklores, the beauty of decorated elephants, horses, camels as a part of the procession. It was started by Raja Wodeyar in the year 1610, and to this day, it has continued its age-old tradition, culture, and heritage.

The prime highlight of the event is the splendid Jumbo Savari. It is a famous Dasara procession followed for centuries. On the tenth day of Navaratri, Elephants, hundreds of them, covered in golden drapes march across the streets of Mysore. And one of its leaders takes up the responsibility to carry the golden chowdah, i.e., the goddess, Shri Chamundeshwari Devis idol weighing around 750 kgs. Elephants used as show stoppers for the event, add glamour to Mysore Celebrations. Thus, making it a magnificent visual retreat.

Being an internal part of Mysore, Mysore Palace completes the Dasara celebrations. The royal palace, decorated with tens of thousands of bulbs, lights up in the night to become a triumphant beacon of good over evil. And therefore Mysore Palace is one of the key attractions of Mysore Dasara Celebrations.

For a Foodie, Mysore is an ideal Dasara destination to visit. Mysore boasts authentic food, and everything from sweets, edibles, snacks, to cookery items, and local flowers. You can go to the food mela to discover and relish the best food culture and variety offered by Mysore.

Exhibitions in Mysore starts on the first day of Dasara and continues for two months. Usually held at the Doddakere Maidan opposite to Mysore palace, the spectacle offers a whole lot of accessories from dolls, Dasara merchandises, handicrafts, clothes, glassware, ornaments, and souvenirs. It is a must-visit for tourists during Dasara celebrations in Mysore.

Followed since Dasara's inception in Mysore, the doll festival is a visual retreat. Doll festival is a representation of different miniature puppets and figurines created by various local artists. It offers a magnificent chromatic exhibit for visitors and locals.

Every year, famous artists from across the country arrive in Mysore to perform and entertain the city. It showcases young talents; encouraging a contemporary way of life. You can rejoice a diverse culture of music, dance, cinema, and all forms of art and culture

Wrestling tournaments has always been a part of Karnataka's culture. And it was a prime show for the Monarchs and locals during Vijayanagara era in Mysore. Continued even today these tournaments bring out a kid in every tourist and local. The cheers and jeers, and the sheer show of masculinity create a much-needed puff to these thrilling fights.

Nothing beats a ride on a helicopter, especially around Mysore. You can enjoy the aerial view of Mysore Dasara with your loved ones through a chopper ride. The ideal time to fly would be in the night, as you can witness Mysore city beaming with celebrations. Mysore truly emerges as a triumphant beacon of good over evil. And apart from the helicopter ride, you can also enjoy other fun activities like 3D projection, Palace on Wheels, and Trin Trin ( jolly cycle ride).

Comments
Read more about: mysore dasara
Other articles published on Sep 26, 2019
We use cookies to ensure that we give you the best experience on our website. This includes cookies from third party social media websites and ad networks. Such third party cookies may track your use on Nativeplanet sites for better rendering. Our partners use cookies to ensure we show you advertising that is relevant to you. If you continue without changing your settings, we'll assume that you are happy to receive all cookies on Nativeplanet website. However, you can change your cookie settings at any time. Learn more
Change Settings Continue