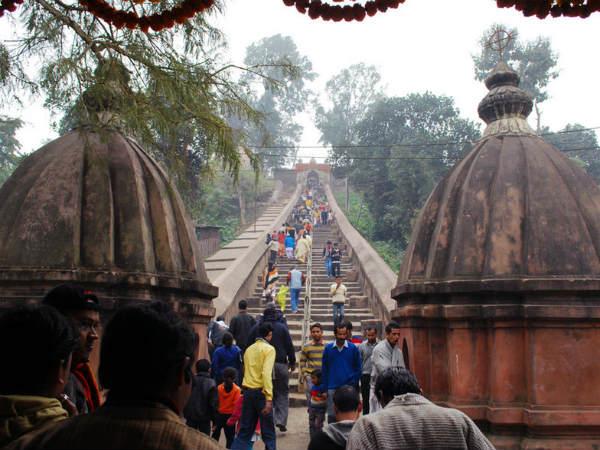 Hajo is one of the holy places located near Guwahati. This town is a pilgrimage site for Hindus, Muslims and Buddhist. Hence, there are many religious places in this town. According to the legend, the people of Hajo are said to be the descendants of Sun (Suryavamshis). It is believed that a group of people came to this place from Tibet and some reports also say that they belong to Indo-Burmese race.

Hayagriva Madhava Temple is one of the prominent temples in Hajo of Assam. The temple was built during the reign of the King Raghudeva Narayan in 1583. The presiding diety of the temple is Lord Narasimha (another form of Lord Vishnu).

Hayagriva Madhava Temple belongs to Pala Dynasty. This stone architecture houses an idol of Hayagriva Madhava. The exterior walls of the temple has many carvings depicting the mythology. One can see the authentic Assamese art scultptures in the temple.

The Hayagriva Madhava Temple is situated on a hill named Monikut in Hajo. The town of Hajo is at a distance of 30km from Guwahati.

Other Places in Hajo

Hajo was under several dynasties and hence there are many religious places built during those particular times. The Kedareshwar Temple, Madan Kamdev Temple, Hajo Powa Mecca and Hajo Ganesha Temple are some of the other places to visit in Hajo.

As said earlier, Hajo is also a Muslim religious place. It is because of Hajo Powa Mecca. It is said that the mosque of Poa Mecca is built using the soil brought from Mecca. The mosque complex also consists of a tomb of Pir Giyasuddin Auliya.

How to Reach Hajo

Hajo is well-connected by road to other parts of Assam. It can be reached from Guwahati by bus, car or private vehicle. Guwahati Railway Station is the nearest railway station to reach Hajo.

So, don't miss out on visiting this charming town of Hajo in Assam.

Comments
Read in Kannada: ಅದ್ಭುತ ಹಯಗ್ರೀವ ಮಾಧವ ದೇವಾಲಯ!
Read more about: religious travel temple guwahati
Other articles published on Jan 5, 2017
We use cookies to ensure that we give you the best experience on our website. This includes cookies from third party social media websites and ad networks. Such third party cookies may track your use on Nativeplanet sites for better rendering. Our partners use cookies to ensure we show you advertising that is relevant to you. If you continue without changing your settings, we'll assume that you are happy to receive all cookies on Nativeplanet website. However, you can change your cookie settings at any time. Learn more
Change Settings Continue