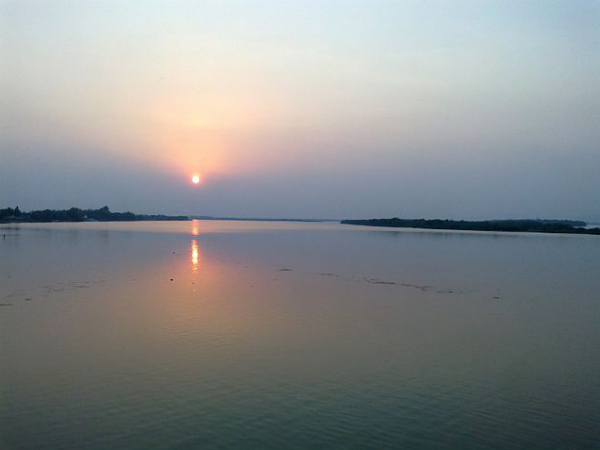 A meme which says 'a male river (Krishna) is silently flowing through four states whereas a female river (Kaveri) is making a lot of noise between two states', brings a smile over the whole tension. Let us concentrate on the first part and leave the rest for now! It is true, Krishna river flows across many states and is one of the longest rivers in India. It is huge, fertile and interesting too! Shall we explore more through these exciting facts about Krishna river?

Krishna Bai Temple is near to Panchaganga Temple in Mahabaleshwar. The rustic look of this age-old shrine looks more beautiful during the monsoon.

Krishna and a few of his tributaries begin their journey in the Western Ghats. The Panchaganga Temple is a 4,500 years-old temple where Krishna river along with Venna, Koyna , Gayatri and Savitri rivers flow out of the mouth of cow (goumukh). Though these rivers branch out, later they join Krishna River.

Love and Krishna are synonymous! Atleast one of the names should be connected with Love and Krishna. No it is not related to mythological life of Krishna. It is the place where three tributaries Venna River, Koyna River, Tarli River and Urmodi River meet Krishna here. So, it is named as Preeti Sangam (confluence of Love) near the city of Sangli in Satara.

One of the Longest Rivers!

Krishna River flows across four states of India: Maharashtra, Karnataka, Telangana and Andhra Pradesh. It covers around 1,300 km along its course and hence it is one of the biggest rivers in India. Specifically, 4th- biggest river in India in terms of area and inflows.

Alamatti Dam in North Karnataka, Srisailam Dam in Telangana, Nagarjuna Sagar Dam in Andhra Pradesh and Telangana, Prakasam Barrage at Vijayawada are some of the famous dams built on Krishna River.

Krishna River has a large coverage area cutting across many regions. It is not only useful in irrigation projects and hydro-electric projects but also in terms of tourism. There are many popular waterfalls which are formed by the Krishna river and its tributaries. Manikyadhara Falls, Gokak Falls (Ghataprabha river), Ethipothala Falls, Kalhati Falls and Mallela Theertham Waterfalls are the popular waterfalls on Krishna River.

Sangli, the Turmeric City of Maharashtra and Vijayawada in Andhra Pradesh are the two big cities located on the banks of Krishna River.

Drains into Bay of Bengal

Krishna emerges in the Western Ghats of Maharashtra and drains into the Bay of Bengal in the village of Hamsaladevi at Andhra Pradesh.