List Of Best Jungle Treks In India To Visit In May 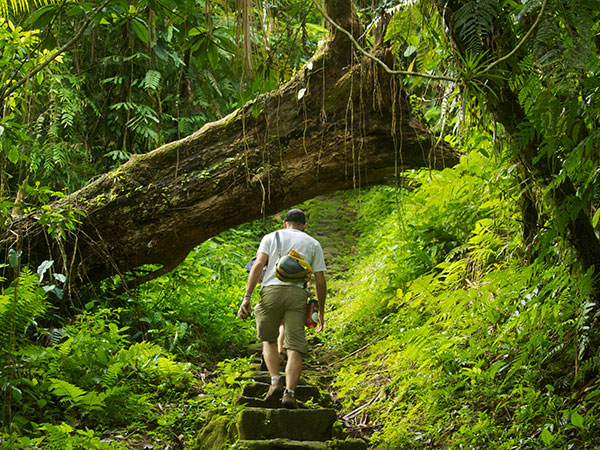 Rudyard Kipling's 'The Jungle Book' never seizes to fascinate one with the wilderness and simplicity of the jungle life. If you are also intrigued by Mowgli's lifestyle, then we have handpicked some of the coolest trekking trails among the wild and untamed jungles of the country.

India's jungles are part of a relatively less-explored territory and lately, terms like jungle trekking, camping in the wild, and forest bathing are growing as the tourism buzzwords. So, if you are hiking or a trekking enthusiast and have a love for the wild, or to the very least appreciate it, here are the ten great jungle trekking destinations in the country to visit in May, that will help you explore the best of the lush green forests of India.

Madhya Pradesh's Kanha National Park is home to at best 22 species of mammals, and the most frequently spotted are the tigers, sloth bear, mouse deer among the others. One of the most popular features of the trek is that it is flanked by the jungles of Seoni, on which Rudyard Kipling's famous work The Jungle Book is set. This national park is quite popular among trekkers and wildlife enthusiasts and also features among the top jungle trekking destinations in India.

When to go: The best time to go for this trek is the period from mid-October to June end. The Kanha National Park remains closed for the visitors in the monsoon season.

The Chembra Peak trek, among the picturesque Wayanad Hills of Kerala, is thought out as one of the most popular jungle treks in the southern peninsula. Perched at a height of 2,100 m above sea level, the Chembra peak is also one of the highest peaks in the Western Ghats and is very popular among the visitors for its unadulterated beautiful greenness and natural charm.

The Wayanad belt is renowned for its great lush thickets and the Chembra trek takes place through the deep colossal forests growing on the slopes of the hills, making you cross through motley tints of lush green wilderness blended with misty clouds. The trek takes about four hours to complete and the trail offers the natural beauty of the Western Ghats in its truest form. One of the most popular features of the trek is the heart-shaped lake located near the peak, known as the Love Lake.

When to go: The best and appropriate time to go for the Chembra trek is the post-monsoon season, which stretches from the months of December to February, when the weather is quite approving and favorable.

The starting point of the Kunjkharak trek in Uttarakhand is at Pangot, which is located at the foothills of the Himalayas near Corbett. If you have a love for remote places then this is the trek to be on. The trail takes us through Akashkanda, amidst gorgeous green jungles dotted with lofty Deodar trees. The setting of the trail is so beautiful and serene as the Kosi river, which forms the border between India and Nepal, runs all along the route to keep you company.

When to go: The months of October to April will make a favourable time to go for this trek.

When we think of Goa, the first thing that pops our minds, is its beautiful golden west coasts and the spirited parties that the place so proudly boasts of. But, Goa has more to it. The Pali Waterfall, alternately known as the Shivling falls, bedecks this sunshine state and makes for on of the most offbeat jungle treks in the country.

The falls are enveloped in one of the densest jungle regions of the state, which is situated in a small village called Valpoi. Keep an eye out for the reptiles and cobras that reside here. The terrain on which the trekking trail is based is quite challenging and is excellent for trekkers with a bit of experience. The trekking trail is about 6 km long and starts from the Valpoi village. The trail comprises of gravel roads, mushy waters and thick lush vegetation.

When to go: The best time to go for the Pali Waterfall trek is post-monsoon, when the weather has cleared up and the heat is less. The season is from the end of August to the end of September.

Arunachal Pradesh is home to some of the largest pine forests nestled among deep valleys lush with bananas and primeval fern trees. Being a treasure trove of nature with extensive flora and fauna and having the maximum forest cover amongst all the states of India, no surprise, that the Talle Valley in Arunachal Pradesh, is quite well known as a jungle trekking destination.

The treks here are defined not just by dense natural vegetation, but also by thick bamboo patches, which are exclusive to this belt. However, the jungles in this part are still devoid of the urban touch and human interference for the most part, as activities like jungle trekking or forest camping are yet to sprout in play.

When to go: The seasons of spring and autumn, in the months of October to April, are the best and the most favourable time to opt for this trek.

Binsar is a small hamlet in the state of Uttarakhand. The place is popular for its picturesque barren panoramas, unspoilt natural charm, and homely hospitable people. The Binsar Zero Point Trek takes you through the Binsar Wildlife Sanctuary and is considered a somewhat simple trek.

The forests at Binsar are home to a number of monkeys, various birds, langoors and many other animals. The starting point of the trek is the Tourist Guest House from which it is an uphill journey among lush green forests to the highest point, Binsar.

When to go: The best time to go for this trek is in the months of October-November and February-March, when the weather is favourable with minimum chances of rains or snow.

It goes without saying, that the Mudumalai National Park in Tamil Nadu, needs no introduction and makes for an excellent jungle trekking destination. The place is a hotspot for all the adventure lovers and adrenaline junkies.

The difficulty level of the trek is relatively easy, as the place is replete with hostels, hotels, resorts and homestays right in the village from where the trek begins. The trekking trail consists of breathtaking views of the entire Mudumalai belt from the peak, and takes you through extensive banana plantations and emerald green wilderness.

When to go: It is best to go towards the end of the monsoon months. The perfect time for this trek is from the end of November to the end of February.

The Kodachadri Peak, perched at a height of 4,406 ft above sea level, situated right at the heart of the Mookambika National Park, located in the Shivmoga region of Karnataka, is a major crowd puller for all the trekking enthusiasts. The trekking trail is snuggled in the laps of the Western Ghats amidst roaring waterfalls blanketed by lush green forests and boundless flora and fauna.

When to go: The best time to go for the Kodachari trek is from October to January.

The Netravali Wildlife Sanctuary in Goa promises an exciting trekking expedition among lush green forests that boast of extensive flora and fauna. The jungles in this belt are defined by lofty trees, with some reaching up to a height of 30 metre, making it a perfect region for jungle trekking.

The trekking trail takes you through the Mynapee Waterfalls, which is a sight to behold in the monsoons. This place is also blessed with excellent rock faces which makes up for a great rock climbing session for the beginners.

When to go: The ideal time to visit this sanctuary is between the months of October and March. Winters are a good time, but the seasonal waterfalls will be slightly scanty during this time.

The Sitabani trek at Jim Corbett in Uttarakhand is the best option for trekkers and travellers who are beginners. The starting point of the trek is the Sitabani temple, and from which there is another temple named, Bhola Mandir, enveloped by dense forests, that is located around 8-9 km from the Sitabani temple. The trail to Bhola Mandir consists of several gurgling rivulets and lush tangled forests, that is home to many wild animals like elephants, tigers and deer.

When to go: The best time to go for this trek is in the months of October to April as the temperature is moderate and there is hardly any rainfall.

Also read:Top 5 Forests In India To Visit For Every Nature Lover