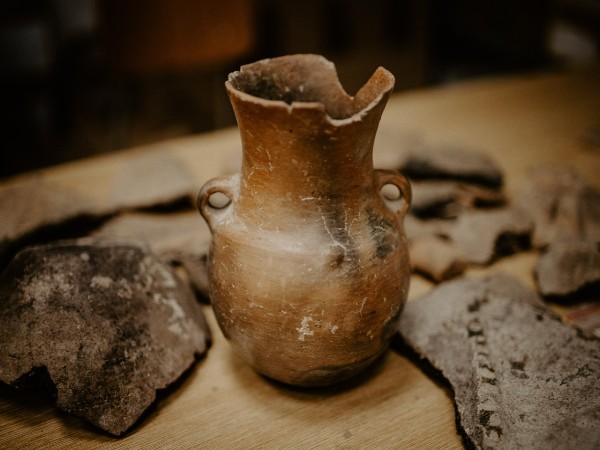 People know about the famous Harappan Civilization, but not many are aware of the ancient site of Rakhigarhi. Rakhigarhi, a village in the Hisar district of Haryana, located 150 km away from the country's capital, is said to be one of the five biggest townships of the Indus Valley Civilisation, including Harappa, Mohenjo Daro, and Ganweriwala. The Archaeological Survey of India claims that Rakhigarhi is the biggest Harappan site in Asia.

Majorly two villages, Rakhi Khas and Rakhi Shahpur have Rakhigarhi's archaeological shreds of evidence. In 1963, the first time the Archaeological Survey of India (ASI) first started excavation and in 1998, around 56 skeletons has been revealed in this region from which two women skeletons were about 7000 years old. ASI also found shell bangles, semi-precious stone beads, and a copper mirror in those two skeletons' hands.

From 2600-1900 BC, the village of Rakhigarhi was part of the great Indus Valley Civilisation. However, the Rakhigarhi site is only 5% excavated and is mostly unexcavated till date.

But soon the Rakhigarhi village will feature the world's largest museum of Harappan civilization. Rakhigarhi is already a famous archaeological site from the Indus Valley civilization era.

The present Chief Minister of Haryana, Manohar Lal Khattar, reviewed the current construction work on 11th September 2022 and instructed the men at work from the Archaeological Survey of India (ASI) to finish the digging work as soon as possible. As per the official tweet from IANS, this museum will showcase nearly 5000-years-old Indus Valley artifacts.

How To Reach Rakhigarhi

By Air: The nearest airport is the Hisar Airport at a distance of 12 km from the main city of Hisar. The Indira Gandhi International Airport in New Delhi can also be used to reach Hisar, which is around 170 km away.

By Road: Hisar is well connected by roadways and tourists can directly reach Rakhigarhi by rented cabs, taxis, or their personal vehicles.

Places To Visit In And Around Rakhigarhi

Located in the town of Hansi, Asigarh Fort was built by the popular ruler of the Hindu Chauhan dynasty called Prithviraj Chauhan during the 12th century. However, the Asigarh Fort was rebuilt in 1798 by George Thomas. The Archaeological Survey of India has declared this square-shaped fort as a centrally protected monument. The structure of the fort is quite unique with 52-feet-tall boundary walls that were impenetrable by the enemies. The fort was constructed following the Hindu architectural style with figures of gods on the entrance gates. Later, during the reign of Firoz Shah Tughlaq, he constructed an underground tunnel in this fort that connected Hansi to Hisar.

Lohari Ragho, a small village, is located near the ancient historical site of Rakhigarhi in the Hisar district of Haryana. It houses three historic mounds which date back to the Sothi-Siswal ceramic period. In 1980, two officials named Dhoop Singh and Chanderpal Singh from the Department of Archaeology and Museums excavated those mounds from this place. Lohari Ragho also has a few religious monuments such as Gurudwara Banda Bahadur, a Shiva temple and several others.

Built in 1303 AD during the reign of Sultan Alauddin Khilji, Barsi Gate is one the most beautiful structures in Haryana. It showcases Persian inscription at the top and is a stunning specimen of the Sultani architecture. Later in 1522 AD, this gate was repaired during the rule of Ibrahim Lodhi. Barsi Gate is the main gateway of the Hansi town.

The Firoz Shah Palace was built by Firoz Shah Tughlaq, who was the sultan of Delhi from 1351 to 1388 AD. Located in the Hisar district, this edifice is made up of rubble stonework and lime plaster. The palace features several underground apartments called the Diwan-e-Aam, Gujri Mahal, a mosque called the Lat Ki Masjid and a storehouse. The architecture of the palace was hugely inspired by Indian as well as Islamic designs.

Built in 1984, Agroha Dham is a Hindu temple dedicated to Goddess Mahalaxmi. The temple is divided into three parts and only the central part of the temple is dedicated to Goddess Mahalaxmi. The two other sections are used to worship Goddess Saraswati and Maharaja Agarsen, who was the ruler of the state of Agroha. Visitors can also find a huge pond named Shakti Sarovar at the rear side of the Agroha Temple.

Located in the western part of the town of Hansi, Dargah Char Qutub is a group of four monuments that were constructed in the memory of four Sufi saints called Jamal-ud-din Hansvi, Qutubuddin Munawar, Burhan-ud-din and Nuruddin. It is said that this place serves as the final resting place of these four saints, who were given the title of Qutub.

Originally, these tombs were quite small, but later these were constructed again into a bigger mosque during the reign of Firoz Shah Tughlaq. Tourists can also take a look of the other monuments constructed within the complex such as the tombs of Mir Ali, Begum Skinner and Mir Tijarah.