A Journey through East Coast Road! 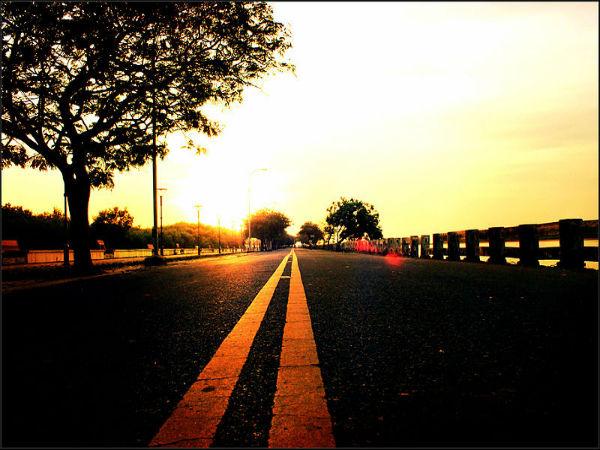 There's none among us who wouldn't love to take road trips enjoying the views that our surroundings offer. If you really want to make the most out of such road trips, India has a some such routes that could make your journey a memorable one. The Leh-Manali road, the roads in Dehradun and the Kodaikanal-Munnar road are just a few of them. One such beautiful road is the East Coast Road in Tamil Nadu.

This trip along the coast of Bay of Bengal offers stunning views and sightseeing options to keep you engaged and enthralled throughout the journey. This road, also known as the State Highway 49, covers some wonderful places from the capital city of Chennai to Cuddalore.

Recently, the road has been extended to Thoothukudi. Some of the tourist destinations that the route covers include Chidambaram, Karaikal, Nagapattinam, Nagore and Ramanathapuram. This journey covers a distance of around 690 km. The govt has plans to extend the road from Thoothukudi to Kanyakumari and the budget allotted for this project is Rs 257 crores.

As you take a road trip from Chennai to Thoothukudi, the road takes you through some of the beautiful attractions in Tamil Nadu. There are temples, museums, and other places of tourist potential that you shouldn't miss. Come, let's start off!

After covering 25 km from Chennai, we would reach Dakshinachitra, a museum that depicts the art, music, culture and heritage of the South Indian states of Kerala, Karnataka, Andhra Pradesh and Tamil Nadu. This museum was established in 1996 by Madras Craft Foundation.

This Shiva temple is located in Thiruvanmiyur, close to Chennai. The temple is largely visited by people with chronic ailments and diseases and the deity here is believed to be very power, protecting the devotees. This temple stands in one acre of land with two gateway towers and a temple pond. The temple is around 4km from Adayar and technically this is where the East Coast road starts.

This quaint little village is perhaps the largest artists' commune in India. This organisation took birth in 1966 under the guidance of K. C. S. Panicker, who was the then Principal of Madras School of Arts. During 1970s the village became an important meeting place for the international artists in India. While you travel through the East Coast Road, this attraction is never to be missed!

This temple is located in Akkarai in Sholinganallur. It was established in 2012 April and is the largest Radha Krishna Temple in Tamil Nadu. The temple compound is an expanse of 1.5acres of land.

This backwater area is located around 23 km from Adayar and offers adventurous activities like water skiing, speedboat riding, wind surfing and rowing. This attraction that's taken care of by the Tamil Nadu Tourism Development Corporation.

This Muslim shrine in Covelong has an interesting tale to tell. Thameem Ansari, born in Medina, was a devoted follower of Prophet Mohammed and His principles. After Thameem's demise, hismortals remians were put in a coffin and floated in the sea as per his last wish. The coffin, however, reached the shores of Covelong, where a dargah was built later.

Covelong is a fishing village located around 40 km from the capital city of Chennai and 26 km from Mahabalipuram. This is one of the places where you can stop, relax and have some snacks as you travel by the Easy Coast Road.

The Tiger Cave is actually a Hindu temple located near Mahabalipuram in Tamil Nadu. The rock-cut temple dates back to 8th century and was built by the Pallavas. This is one of the ancient caves where you can find the inscriptions and carvings that centuries old.

Mahabalipuram is a UNESCO World Heritage site in Tamil Nadu that got shaped during the reign of Rallavas. The shore temples here are known for their Pallava sculptures.

The Crocodile Bank is located around 14 km from Mahabalipuram and is known for its allegators, snakes and crocodiles. Over 5000 reptiles are bred here in open surroundings. You can watch them from a safe distance!

The Alamparai Fort is in ruins today. The fort is located in Kadappakkam, a village around 50 km from Mahabalipuram. The fort that was built in 17th century during the Mughal era, was destroyed recently during the Indian Ocean earthquake in 2004.

The beaches of Pondicherry needs no introduction. This French colony is located along the East Coast Road and has some of the pristine beaches you wouldn't want to miss.

Cuddalore is a lovely place located along the coast of Bay of Bengal. Offering spectacular views of nature, the place also has some magnificent temples apart from the beaches and other natural surroundings.

Karaikal is synonymously called the 'Town of Temples'. This port city is located between Chennai and Thoothukudi. Karaikal is visited by tourists from around the world for its temples and beaches.

Located around 16 km to the south of Karaikal, Nagore is a popular pilgrim destination in Tamil Nadu. Nagore Dargah is one of the popular attractions of the place.

Vedaranyam is a temple town that is located along the East Coast Road. The town can be easily accessed from Velankanni, which is yet another popular pilgrim site.

While travelling through the East Coast Road, the Muthupet Lagoon is located at the southern end of the river delta of Cauvery, on the Bay of Bengal. The mangrove forest here is what makes the place worth a visit.

The Manora Fort is located in Mallipattinam, a coastal village in Thanjavur district of Tamil Nadu. The 8 storeyed hexagonal tower overlooks the Bay of Bengal. It also claims to have an underground passage to Thanjavur which is 65 km away!

Thoothukudi, or Tuticorin, is where the journey ends. This famous port town is also called as the 'Pearl Town' as it is popular for pearl diving. The Hare Island, the Harbour beach and Korkai are a few attractions that you may explore in Thoothukudi.