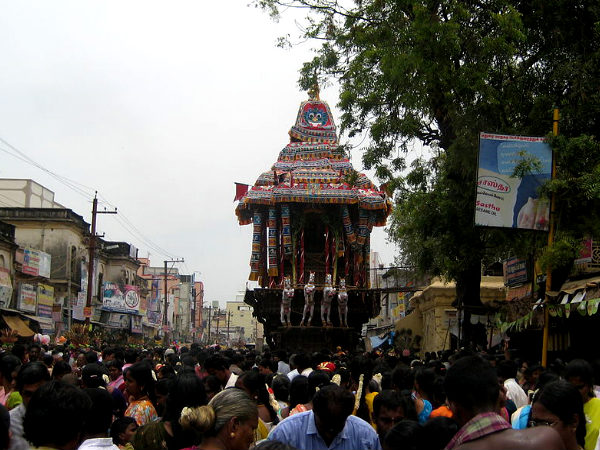 Tamil Nadu is not only one of the culturally strong states in India, it is also known for its faira and festivals that make it unique among the other states. This 'state of temples' is full of legends and stories related to mythology and history, making every traveller curious about the hidden mysteries of the places here.

Let's have a look at 4 popular festivals of Tamil Nadu that you shouldn't be missing, if you are to visit this beautiful land!

Kolam that is a part of Puthandu

Like any other state, Tamil Nadu has its own unique celebrations when it comes to welcoming a new year. Pongal, the Tamil New Year, is celebrated on the first day of the Hindu solar calendar, which falls on April 14th according to the Gregorian calendar. The day begins with the sight of kanni, which is believed to be the first sight of the year that stays through the year.

The 'kanni' is made using jewels, fruits, vegetables, money, rice, flowers, etc. On this day, the entrance of each house is adorned with designs made of rice flour, which is called as 'kolam' and the doorways are decorated using mango leaves.

Chithirai, popularly known as Chithirai thiruvizha, is celebrated in Madurai. This is one of the longest festivals of the world, as it lasts for a month. Happening during the month of April, this festival is to celebrate the celestial wedding of Goddess Meenakshi and Lord Sundareshwarar, who is an avatar of Lord Shiva.

Mahamaham is a grand festival that is celebrated once in 12 years in Kumbakonam of Tamil Nadu. Lakhs of devotees gather at Kumbakonam to take a holy dip at the Kumbakonam tank. This is believed to wash off all the sins, and the devotees indulge in charitable activities hoping to get rewarded in their subsequent lives. The last festival was held in Febeuary 2016.

A sight from pongal celebrations in Tamil Nadu

Pongal is the harvest festival of Tamil Nadu. This 4-day festival is celebrated at the end of the harvest season, with food, exchange of wishes and prayers hoping for a good harvest the next season. The celebrations of the four days are namely Bogi festival, Surya pongal, Mattu pongal and Kaanum pongal.