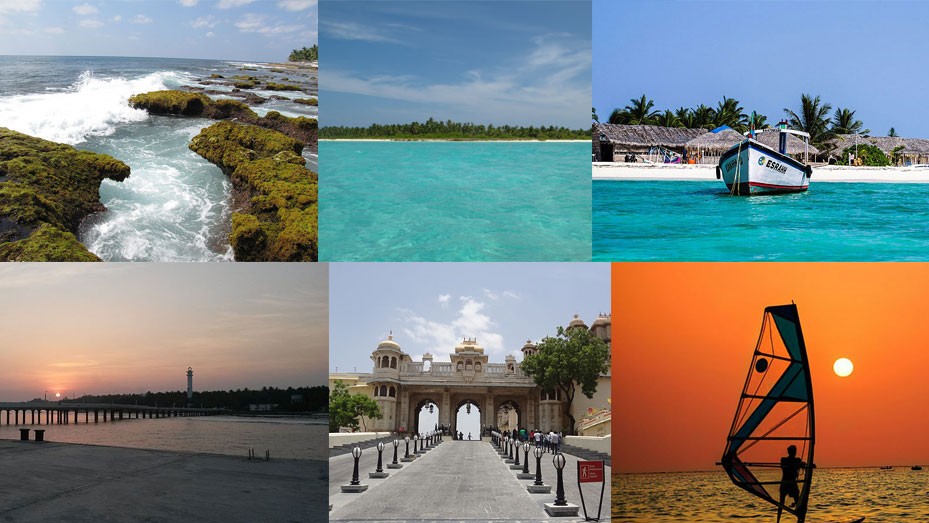 They say Male in Maldives is a tropical paradise. We ask why one wouldn’t want to venture a few hundred kilometres north, around 250 km off the coast of Kerala in India? Furthermore, your Indian Visa gives you access to many other fun, mainland destinations.

Lakshadweep, earlier known as the Laccadives, a set of 39 islands and islets, has fast become a tourist hotspot, especially for those sold to the idea of a true secluded sun and sand vacation. With over 4,200 square kilometres of lagoon area and 36 square kilometres of island area, there’s something for everything at the Lakshadweep islands.

The islands have a total of approximately 132 km of coastline length, which means lots of beaches and lots of watersports!

After India became independent on the 15th of August 1947, Lakshadweep, then in the possession of the British was to be incorporated into the Indian Union. However, owing to a primarily Muslim population on the island, there was growing concern that the then, Dominion of Pakistan, could have claimed right to the islands.

The Home Minister of India dispatched Indian Navy Ships which hoisted the Indian national flag on the island, hours after which the Pakistan Navy was seen probing around the area. Lakshadweep is today, home to an Indian Navy base considering security threats to Indian Ships in the Middle East region.

Fun On The Islands - Tourist Places In Lakshadweep

The driving factor backing Lakshadweep’s success as a tourist destination has got to be the way nature, in general, has been preserved on the islands. Some say, nature is so well preserved that it wouldn’t have looked very different when the islands were first discovered.

The two major islands are Agatti which houses Lakshadweep’s domestic airport and Bangaram, a tourist favourite and the only island in the lot that permits consumption of alcohol. The quality of seafood on the islands is exceptional given fish and seafood in general make for the island’s major export.

The island is rich in tuna and the preparations are unparalleled. The entire setting of Lakshadweep can’t help but make you wonder if the place was built for tired city dwellers in search of a break, far away, secluded.

Fishing is a great way to de-stress and numerous opportunities prevail at Lakshadweep to fish! Scuba diving, of course, is another popular tourist activity. Most experienced divers rate Lakshadweep as one of the most virgin places to go diving and swear by the quality of the experience.

The virgin reefs, abundant marine life, especially game fish and sea turtles and skilled instructors make it a perfect place to go diving. Generally, diving is permitted on as deep as 30 m, but in exceptional cases, tourists can avail of a decompression chamber from the 15th of May to the 15th of September.

For those of you now willing to indulge in a full-fledged scuba experience, numerous snorkeling possibilities exist on the island. Snorkeling is essentially, exploring shallow waters with a diving mask but no scuba gear.

The lagoons are as blue as they can get and the corals sparkle! The resorts at Lakshadweep offer superior holiday value and the beaches are creamy white with swaying palms and coconut trees.

Lakshadweep promises to send you soul searching, and is undoubtedly one of the best tropical experiences India can offer.

The best time to visit the Lakshadweep Islands is towards the end of the monsoons to right before the peak of the next summer.

Lakshwadweep is accessable by air and sea. No road transport is available.

Lakshadweep is Famous for

How to Reach Lakshadweep