Daman and Diu - Get In Touch With Nature! 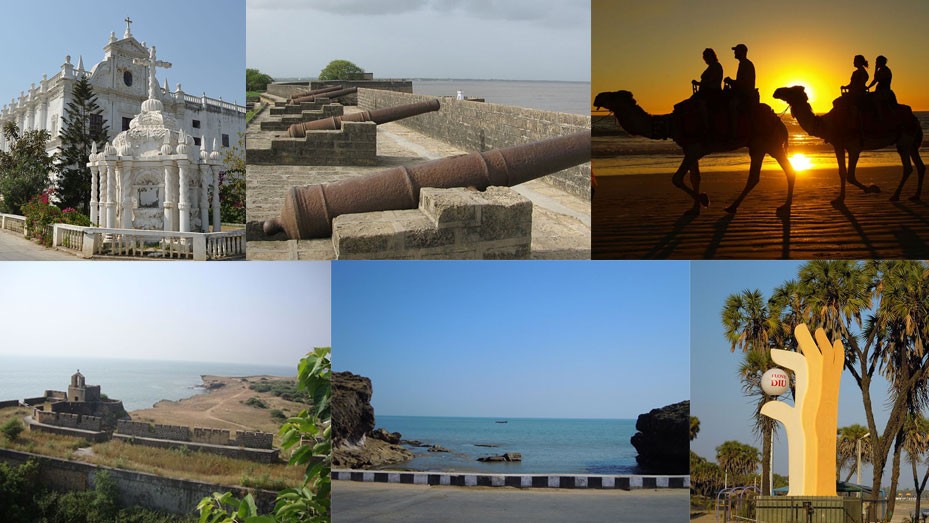 If you are planning on going for a vacation to places that echo natural beauty and serenity, then Daman and Diu, two of the union territories of India would be the perfect choices. These districts were Portuguese turfs for over 450 years before the Indian Independence and were declared as a part of the Indian republic on 19th December 1961, along with Goa. History states that Daman and Diu have witnessed many wars during the early times. English, Hindi, Gujarati, Portuguese and Marathi are the main languages spoken in these two districts.

Daman is a district that is located at the mouth of the Daman Ganga River. This laid-back district, with its perfect natural beauty, attracts visitors from all over the world. Also, this region is a mixture of various races and cultures living in harmony.

The district of Daman is renowned for its Portuguese Colonial Architecture, the inviting beaches and churches. This delightful region was earlier known as Kalana Pavri or Lotus of Marshlands. Another interesting fact is that, Daman is divided into two little towns known as Nani Daman and Moti Daman, separated by River Damanganga

The cultural aspect of Daman Tourism is a perfect blend of tribal, urban, European and Indian traditions. The district has a rich heritage. Dance and music are given utmost importance by the inhabitants. One can expect to sun-bathe with joy on the beaches of Daman, along with taking in the scenic beauty of the place. Apart from the blissful views, Daman also offers a mouth-watering variety of local sea-food for the visitors to enjoy.

With a pleasing weather all round the year, Daman proves to be an apt place for the visitors to visit during any time of the year. The temperature ranges from a maximum of 39 degree centigrade to a minimum of 11 degree centigrade. During the summers Daman experiences cool breeze. The best time to visit Daman would be from the beginning of September to the end of May.

Tourist places in and Around Daman

Some of the places of interest of Daman Tourism are the Jampore Beach, the Devka Beach, Church of Bom Jesus, Vaibhav Water World, Fort of St.Jerome and so on.

Diu Tourism - A look into the history

With its interesting history and peaceful atmosphere, the district of Diu is located at the southern tip of the Saurashtra (Kathiawad) peninsula of Gujarat, surrounded by the Arabian Sea. Like Daman, Diu was also a Portuguese colony until 1961. Earlier to that Diu was ruled by kingdoms from the pre-historic and even the medieval times. A narrow channel creates a division between the island of Diu and the coast. This Union Territory is the ninth least populated district in the country of India

With its breezy climate, Diu proves to be a serene and relaxed spot for the visitors to experience. As the climate at Diu is pleasant and sunny all year long, travellers can visit at the time of their choice. The beaches at Diu are thronged by visitors frequently, as they offer a great experienc.

Diu Tourism boasts of a rich cultural heritage which is a fine combination of the Kathiawadi or Saurashtra tradition and also the Portuguese culture. Even the architecture of this district bear the evidence of the Portuguese influence. This district’s religious sector mainly comprises of Hindus, Muslims and Christians. Diu also has good road links from major cities such as Ahmedabad, Rajkot, Bhavnagar and Vadodara, so that the visitors can effortlessly get to the place.

Tourist places in and Around Diu

The travellers must not miss paying a visit to the renowned tourist attractions of Diu, some of which are, the Nagoa Beach, the Ghoghla Beach, the Jallandhar Beach, the Gangeshwar Temple, St. Paul's Church, Sea Shell Museum, Diu Fort and more.

The eye-pleasing architecture, the placidly clean atmosphere, the beaches and the lush greenery mingled with perfect weather, make Daman and Diu Tourism ideal for travel lovers.

View All Daman and Diu Attractions

View All Daman and Diu Destinations