The Qinghai-Tibet Railway : Roof Of The World Express 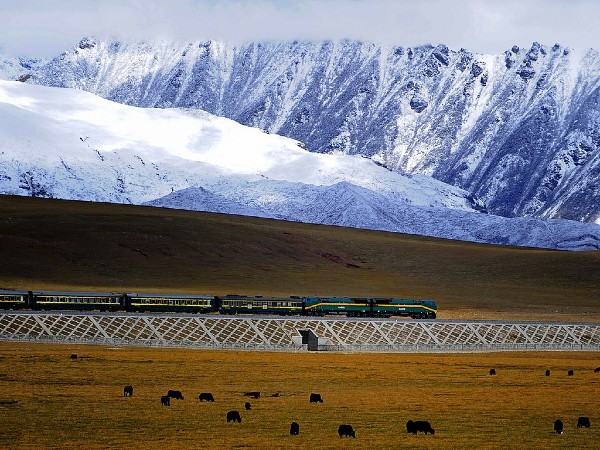 The world's highest railway line, the 'Roof of the World Express' was opened in 2006. It runs for 1,142 km (710 mi) between Lhasa, the capital of Tibet and Xining in China, crossing the Tibetan Plateau more than 5 km (3 mi) above sea level.

It reaches its highest point at the Tanggula Pass (5,231m/17,158 ft) and goes through the Fenghoushan, the highest tunnel in the world at 4,905 m (16,093 ft). There are 675 bridges and 45 stations along the line, and more than half the track is laid on permafrost in a miracle of engineering.

The railway is the fulfilment of China's long-term ambition to join its western province with the rest of the country, to promote economic progress and cultural unity. The Tibetans view it rather differently - as yet another threat to their ancient indigenous culture; and environmentalists are concerned about disruption to the region's delicate ecology. Whatever the rights and wrongs, it cannot be denied that it is both an incredible journey and an inevitability in a globalized economy.

Most of the journey is at an altitude of over 4,000 m (13,000 ft). The carriage windows are tinted to block out harmful ultraviolet rays and every berth has a personal oxygen canister in addition to the oxygenated air that is pumped around the train. As you cross the desolate treeless Tibetan plateau - the 'Rooftop of the World' - you enjoy a spectacular moving picture of the surreal scenery.

You pass the highest lake in the world, see yak, wild antelope and donkeys grazing and watch golden eagles cruising through the sky. Puffy white clouds hang in the cobalt-blue Tibetan sky above a vast moonscape of yellows, ochres and browns, and a skyline of sharply etched snow-capped peaks glows golden in the sun.

May to June or September to October

Xining - Kumbum Monastery, is one of the most important Buddhist sites in China.

You can now travel all the way across China on a single train journey between Lhasa and Beijing in three days.