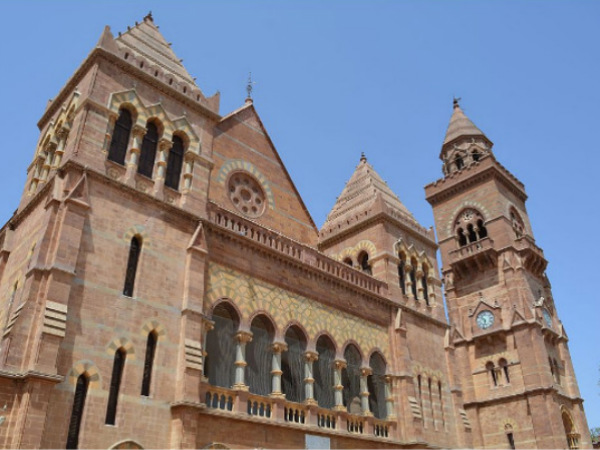 The city of Bhuj is one of the beautiful tourist destinations in Gujarat. Its heritages and legends add on to its charm. Legends say that it was the land of Naga Chieftains and the city is named after Bhujanga, the last Naga Chieftain of Bhuj.

Later, it was developed by Rao Hamirji, who established it as a capital of Kutch state. Today, Bhuj is the district headquarters of Kutch District in Gujarat. This ancient place offers a lot for tourism, and hence it has become one of the top tourist places in Gujarat.

Prag Mahal is one among the popular tourist places in Bhuj. It was commissioned during the time of Rao Pragmalji II. Prag Mahal is built in the Italian Gothic style of architecture, which makes it a unique heritage. Now this beautiful structure is also a famous Bollywood film shooting location.

Isn't it nice to look around this exotic palace? Have a look at this photo tour of Prag Mahal in Bhuj!

The Italian Gothic Style architecture of Prag Mahal is one of the major attractions. Several Italian artisans and Kutch architects were involved in the building of this palace. Italian marble and sandstone are the main materials used in the construction.

It took over 3 Million rupees to construct Prag Mahal. It is said that the workers were paid in gold coins (which was the currency at that time).

Durbar Hall, Clock Tower, murals and the courtyard are some of the main attractions of Prag Mahal.

Comments
Read more about: heritage bhuj gujarat
Other articles published on Feb 7, 2017
We use cookies to ensure that we give you the best experience on our website. This includes cookies from third party social media websites and ad networks. Such third party cookies may track your use on Nativeplanet sites for better rendering. Our partners use cookies to ensure we show you advertising that is relevant to you. If you continue without changing your settings, we'll assume that you are happy to receive all cookies on Nativeplanet website. However, you can change your cookie settings at any time. Learn more
Change Settings Continue