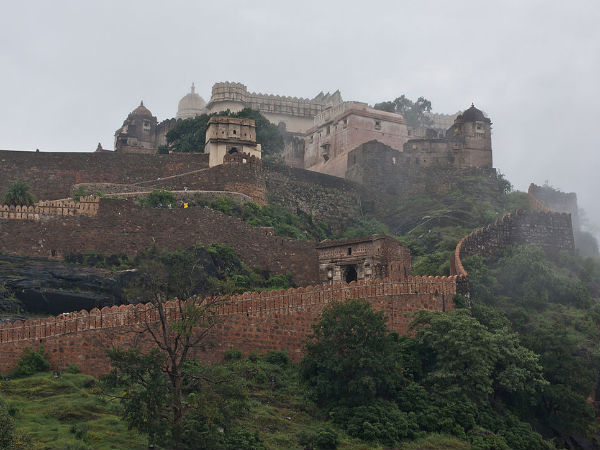 Rajasthan is known for its palaces and forts built by generations of Rajput rulers. Kumbhalgarh Fort is one such gigantic fort in Mewar region of Rajasthan. Maybe, Kumbhalgarh is not as famous as other forts in Rajasthan, yet it is the most prominent one in the history of India.

Designed and built by Rana Kumbha, this fort is now a World Heritage Site. It is also the birth place of king Maharana Pratap. Kumbhalgarh Fort of Mewar has 7 gateways and 360 temples within the fort. One can get a magnificent view of Aravalli ranges and Thar Desert from the fort.

Kumbhalgarh was the undefeated fort till the time of Akbar. Later, came under the rule of Marathas. Till today Rana Kumbha's fort stands strong in a royal grandeur. In the memory of Rana Kumbha's passion for art and architecture, Rajasthan Tourism Department organises a 3 day annual festival near the fort. Many cultural programs and competitions are held during the festival.

The Wall of Kumbhalgarh Fort

An aerial view of the great wall of the fort.
Photo Courtesy: Antoine Taveneaux

One of the 7 entrances of the fort.
Photo Courtesy: Aryarakshak

Bastions of the Fort

Exterior view of the wall of Kumbhalgarh
Photo Courtesy: Shakti

Badal Mahal Inside the Fort

Paintings inside the wall of the palace.
Photo Courtesy: Sujay25

A temple inside the fort
Photo Courtesy: Antoine Taveneaux

An Overview of the Fort

Read more about: forts rajasthan
Other articles published on Sep 21, 2015