Hasanamba: The Story of Miracles! 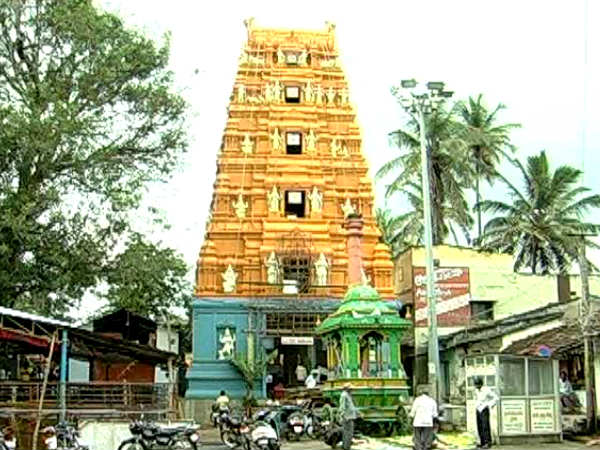 Ooty of the Poor - that's the tag Hassan enjoys! Situated 183 km to the West of Bangalore, Hassan gets its name from the presiding deity of Hasanamba Temple. The Goddess of Shakti, Hasanamba has chosen her abode in the heart of Hassan city.

The Hasanamba temple in Hassan district of Karnataka makes for an interesting story of miracles. Do you need to believe in all of them to understand Indian culture? Perhaps not. But it sure adds to the flavours of India. Adding to the ever-lasting list of her miracles, Hasanamba gives audience to her devotees only once an year. Depending on the Hindu Calendar, the duration varies each year. The temple only opens on the following Thursday of the full moon day in the month of Ashwija (usually late Oct - early Nov). The temple closes on the day of Balipadyami when the rest of Karnataka is celebrating Deepavali.

Once when the seven Maatrukes (Brahmi, Maheshwari, Kaumari, Vyshnavi, Varahi, Indrani and Chamundi) came floating to the South of India, they were taken aback by the beauty of Hassan and decided to make it their home forever. Maheshwari, Kaumari, and Vyshnavi took residence in the three anthills inside the temple; Brahmi in Kenchamma's Hosakote; while Indrani, Varahi and Chamundi chose the three wells in Devigere Honda.

The first and the most evident of all miracles comes when the flowers offered and the lamp lit the previous year stay intact on the opening day to make strong people's belief in Mother Goddess.

There's an intriguing in-law story attached to Hasanamba. Don't get me wrong. It is no story part of your daily dose of television drama. It is a story that gives hope to thousands who visit the temple each year. A daughter-in-law in the vicinity of the temple used to visit Hasanamba everyday. Her evil (yes, evil!) mother-in-law threw a hard object at the daughter-in-law when she started bleeding profusely and gave out a loud cry pleading the Mother Goddess! The ever compassionate Hasanamba manifested before her and turned her into a stone inside the temple so as to provide shelter to her devout child.

It is said that the stone moves forward measuring less than an inch every year. And once the stone reaches the feet of Mother Goddess, time as we know it now will cease to be. Or to put in more colloquial terms, Kali Yuga will come to an end.

Folk narratives see no end for there's a decently recent story attributed to Hasanamba. Four robbers plotted to loot the temple off its treasure. Hasanamba got angry by their misdeeds and cursed them to turn into stone. Hence, the temple is also called Kallappanagudi.

Turning into a stone? Show of love AND anger? Talk of flavours! India is indeed a land of several paradoxes. Be assured that paradoxes don't necessarily hint contradictions. In fact they feed on each other and make the story a harmonious blend of striking colours.

The structure seen at the entrance of Hasanamba temple is a temple dedicated to Lord Shiva locally called Siddheshwara. It is renowned for its self-manifested linga. There's also an interesting idol of a nine-headed Ravana playing the Veena here. Honouring the devout nature of Ravana, every new moon day people gather at the temple. The annual chariot festival also takes place on the closing day of the Hasanamba temple during Deepavali.

Click here to know more about various events planned by the organizing committee of Hasanamba temple. Regular buses and trains ply all day long from Bangalore to Hassan. Don't miss your chance to visit Hassan during this rare and grand event to seek the blessings of the Divine Mother Goddess!