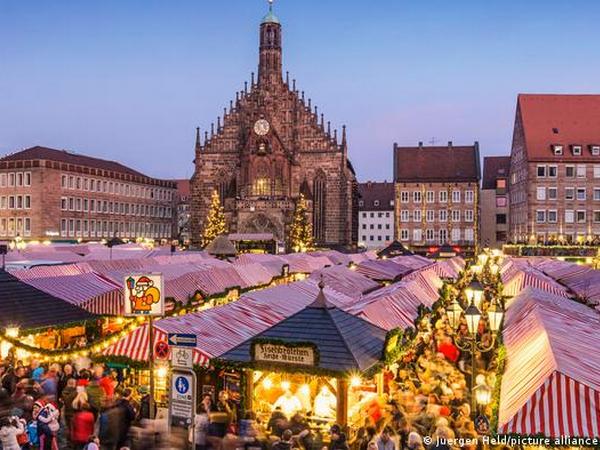 Nuremberg's Christkindlesmarkt, or "Christ Child Market," is one of the best known and popular fairs of its kind. This year, however, it will forgo its traditional opening ceremony - typically lead by a girl dressed as an angelic Christ Child figure, reciting a festive prologue from the balcony of Nuremberg's Frauenkirche Church - in line with coronavirus safety regulations. Instead, Nuremberg is holding an online opening ceremony on November 26.

Normally, thousands flock to the square in front of the Frauenkirche Church to witness the market's grand opening. These days, that poses an unnecessary infection risk, one which nobody is willing to take. "It's a no-go in these coronavirus times, it would send the wrong signal," Thomas Meiler of Nuremberg's city marketing agency told DW. So while Germany is allowing Christmas markets to reopen this holiday season, they will differ from what we're used from carefree pre-pandemic times.

Christmas markets are a big deal in Germany. And they're big business, too. In 2018, some 3,000 markets opened across Germany, attracting a total of 160 million visitors, according to a study by IFT, a German tourism consultancy. Taken together, they generated some €2,9 billion ($3,4 billion) in revenue.

Cologne Cathedral Christmas market before the pandemic tended to see the greatest number of visitors, attracting some 4 million people on average, of which almost 20% hailed from abroad - far surpassing the German average for foreign guests. Stuttgart's festive fair was the second most visited, with some 3,5 million guests, followed by Munich Christmas market, drawing some 3 million visitors annually. Nuremberg's Christkindlesmarkt, meanwhile, recorded an average of 2 million guests.

Germany's festive markets typically open from around mid- or late November until Christmas. Yet last year, with coronavirus infections surging, fairs were called off. The cancellation put a damper on the festive mood, and presented stall operators with serious economic problems. Albert Ritter, head of Germany's Association of Fair Vendors, says times have been tough for the industry. With last year's Christmas markets cancelled, many vendors have had to dip into their retirement savings, or look for jobs elsewhere, Ritter told DW.

The Christmas season is a crucial time for stall operators to generate income, as it's followed by long lull until business picks up again at Easter. With Germany's emergency financial aid running out by late 2021, vendors are counting on this year's markets being a success, Ritter added.

Germany's federal states and cities have introduced a myriad of rules to help curb the coronavirus infection risk when Christmas markets reopen. While some regions have imposed strict regulations, others are opting for a more liberal approach. And sometimes, different sets of rules apply in the exact same region.

Dortmund's Christmas lights fair, for instance, will not go ahead, operators say, as state safety regulations are too demanding and costly. All guests wishing to visit the market, held on a fenced off premise, would have had to show proof of either vaccination, recovery from COVID-19, or a recent, negative test result. Organizers say this places undue financial strain on the operation, rendering it economically unviable.

Dortmund's municipal Christmas market, on the other hand, which is held in the city center, must not adhere by these strict rules. The state's public health ministry told Ruhr24 news outlet that spot checks would suffice when fairs are staged in publicly accessible places, such as urban centers. Ironically, then, having a fenced off fair ground is proving disadvantageous for Dortmund market organizers.

Berlin's Charlottenburg Palace Christmas market has been cancelled for similar reasons. "Political decision-makers once again failed to put in place clear, realistic rules ahead of time," market operator Thommy Erbe told German media outlets. Berlin's infection protection law prohibits the consumption of alcohol in public parks, thus rendering Charlottenburg Palace park an alcohol-free area. In addition, organizers would have had to enforce mandatory face-mask wearing and check visitors are either vaccinated, have recovered, or tested negative for the virus. Faced with some €250,000 ($290,00) in additional administrative costs, organizers decided to call off this year's Charlottenburg Palace market.

Most Christmas markets in urban centers will rely on spot checks to make sure revelers don't pose an infection risk. And Germany's second-largest fair in Stuttgart will be issuing wristbands for the immunized, recently recovered and tested.

Bavaria, known for its tough rules for minimizing the risk of coronavirus contagion, is taking a surprisingly relaxed approach to this year's festive markets. Revelers must neither wear masks, nor prove they have been vaccinated, recovered from COVID-19, or show a negative test result. Fair organizers are, however, working to limit visitors numbers and prevent crowds forming.

Nuremberg's Christkindlesmarkt will, for instance, cut back on the number of stalls. Whereas the main fair ground boasted some 140 stands, this year there will be only about 100. Overall, the market grounds will have fewer and narrower lanes. Unlike in the past, there will not be a stage in front of Frauenkirche Church. The manger, previously situated at the heart of the fair, will take its place. Heavily frequented food stalls will be moved from the center to the market's outer fringes, and mulled wine will be available only on city hall square. The overall plan is to spread out the stalls across four squares.

Christine Beeck, who heads the city's market department, says contingency plans have been drawn up in case safety rules have to be ramped up. She says if need be, mulled wine stalls on city hall square could be fenced off. In addition, access to and from the main market could be restricted to one-way lanes.

So it seems this winter, fans of roasted chestnuts, gingerbread, mulled wine and other festive treats will be able to finally get their Christmas market fix. But with a plethora of different coronavirus safety rules in place, visitors will be well advised to check the local regulations before heading out.