Visiting The Spiritual Town Of Maheshwar 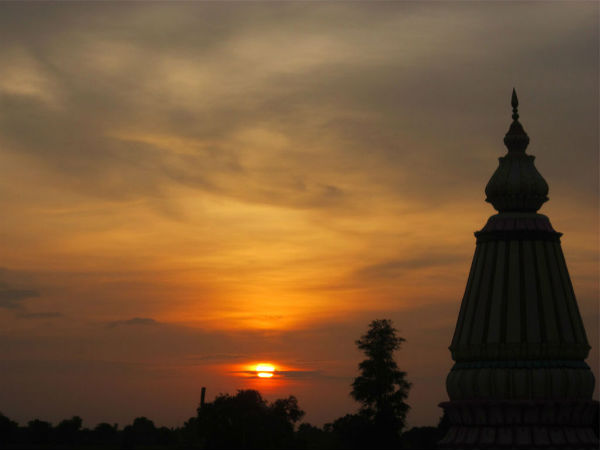 Located on the banks of river Narmada, this beautiful town is known as the temple town of Madhya Pradesh. The town holds an important place in the mythological as well as historical perspective with mentions in the epics of Ramayana and Mahabharata. The town was the capital of Rani Ahilyabai Holkar, who beautified the city with its many buildings in the Maratha style of architecture.

The place is well-known for the Maheshwari sarees which were introduced by Ahilya Bai Holkar around 250 years ago. Being located on the banks of river Narmada, one can find a number of Ghats, which reminds you of the much famed ghats of Varanasi. The sunsets from these ghats is a must watch along with enjoying the cool breeze of the Narmada river.

The town has been the centre of handloom weaving since the 5th century. It is home to one of finest handloom fabrics in the country. The place is well-known for the weaving of the colourful Maheshwari sarees.

These cotton sarees are weaved in distinctive designs which involve stripes, checks and floral borders. The hand woven materials are also used as fabrics to make kurtas and other dresses.

Maheshwar can be visited anytime during the year.However the months from October to March are considered to be the best months as the weather remains favorable. The place experiences extreme climatic conditions during the summers and as well as winters.
PC: Nilrocks

By Air: The nearest Airport is the Indore Airport which is approximately 91 km away from the town. The airport offers connectivity to all the major airports across the country such as Delhi, Mumbai, Bengaluru etc. One can hirecabs, which are easily available here in large numbers,to reach Maheshwar.

By Train: The nearest railway station is Marwaha which is around 39 km away from the town, being a small station some trains do not make a stop here.

The nearest major railway station is Indore which is approximately 80 km away, the station is well-connected to most of the major towns and cities across the country and across the state of Madhya Pradesh.

By Road: One of the best ways to reach Maheshwar is by road, as the place offers excellent connectivity by road with buses operating from different parts of the state.
PC: nevil zaveri

Located on the banks of river Narmada, the structure was built in the 18th century and was home to Rani Ahilya bai Holkar. The fort is also known as the Queen's fort and it was the administrative headquarters of the Holkars.

The palace is the pinnacle of Maratha architecture, one can find a life-size statue of Rani Ahilyabai Holkar, sitting on the throne. The palace also has a number of Chhatris, temples and a wada or a giant entrance which makes the fort an interesting place to visit. .

At present, the fort is converted into a heritage hotel, which is managed by Shivahi Rao Holkar, who happens to be the son of the last Maharaja of Indore.
PC: Jean-Pierre Dalbéra

Jaleshwar Temple is a Shiva shrine, where he is worshipped as the God of Water, which is why he is known as Jaleshwar. The temple attracts a huge number of devotees especially during the festival of Shivarathri.

The temple is known for its carved overhanging balconies, and its architecture. According to legends, Lord Shiva protected earth from sinking in the waters of river Ganga, when she came crashing down from heaven.
PC: Spsarvana

Another temple dedicated to Lord Shiva, the Ahilyeshewar temple is an example of the magnificent architectural skills of the Maratha artisans. The temple is home to intricate designs and art which is done in tribute to the deity. Apart from the shrine of Lord Shiva, one can also find a shrine of Lord Rama.

The place is must visit, if would love to relax after a hectic day.
PC: Jean-Pierre Dalbéra

Regarded as one of the most grand temples in the town, the temple is situated at the confluence of Narmada and Cauvery rivers.

As per legends, Lord Shiva is said to have taken the form of Omkareshwar to defeat Danavas who had won a duel with the gods. The temple is located in the Mandhata Island which is in the shape of Om, it also called as Shivpuri Island.
PC: Dusanesurbhi