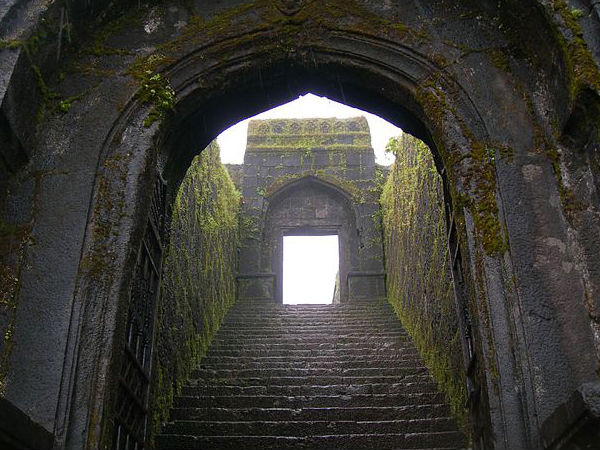 Raigad Fort on the Rairi hill is situated in Mahad of Pune. This is a hill fortress which became the capital of Chatrapati Shivaji's Maratha empire. Tourists can either trek to the fort which is 2,700ft above the sea level or use the Raigad ropeway to reach the fortress.

The hill fort was seized by Shivaji from Cadet dynasty and renovated to make it his stronghold. The place has witnessed significant events in the past such as the coronation of Chatrapati Shivaji, various wars and battles, attacks from British empire, etc.

Many portions of Raigad Fort are destroyed, yet the remaining structures stand in grandeur and shows why it was called as the 'King of Forts'. Strategically, its location was a big advantage for the Maratha empire and enemies couldn't climb up the hill so easily.

It is one of the popular weekend getaways located around 138km from Pune. Inside the fort, tourists can see the majestic entrances, towers, tombs of Chatrapati Shivaji and his mother Jijabai, a Shiva temple, Tak Mak Tok, a few artificial lakes, etc.

Among all other forts in Pune, Shivaji Maharaj spent many years and also died in this fortress. He also proclaimed the Hindavi Swarajya (Hindu self-rule) in this same place. British East India Company, which was constantly targeting Marathas, made a well planned attack on Raigad Fort and destroyed it with the use of cannons in 1818.

Today, Raigad Fort is in a ruined state but it retains its charm and beauty. It is now a famous tourist attraction in Pune and people love to go on one day trips to this hill fortress.

Maha Darwaja is the main gate of the fort but it is the second entrance. Jit Darwaja in Pachad village is the first gate to enter the fortress.
Photo Courtesy:  Hydkat

Nagarkhana Darwaja meaning the 'music gate', it is believed that music was played here at all times and could be heard till the throne of Shivaji.
Photo Courtesy: Swapnaannjames

The Statue of Shivaji

Chatrapati Shivaji was coronated in Raigad Fort and a statue of him is installed in that particular place.
Photo Courtesy: Swapnaannjames

Ruins of the Towers

Palkhi Darwaja was only used by the King and his special convoys.
Photo Courtesy: rohit gowaikar

Ropeway To Reach the Fort

Raigad Fort is where Chatrapati Shivaji was coronated and died. He also stayed here for a long time.
Photo Courtesy: Sa napster

Tak Mak Tok is a cliff edge where prisoners were pushed to death in those times.
Photo Courtesy: Chetan Karkhanis

It is recorded that Shivaji was very close to his mother Jijabai and there is also a tomb built for Jijamata in the Raigad Fort.
Photo Courtesy: Coolaks21

Ganga Sagar Lake is one of the artificial lakes built for water supply and there were many such water storage systems inside the fort.
Photo Courtesy: Avinash.gaikwad

In front of Shivaji Mahraj's tomb, there is also a memorial built for his dog Waghya.
Photo Courtesy:  Swapnaannjames

Ruins of the Palace

The palace is mostly destroyed. It is said to have destroyed by the British.
Photo Courtesy:  Swapnaannjames

A woman named Hirakani,comes inside the fort on business but gets late and the fort gate gets closed. In her desperation to reach home, she jumps the compound of the fort and reaches home. Shivaji thrilled with the story, orders to build a wall in her name.
Photo Courtesy: Pratish Khedekar

A Replica of Shivaji's Throne

Once a similar kind of throne studded with gold and diamonds was there in the fort. A replica, carved in stone, is now located in the ruined assembly hall of the Raigad Fort.
Photo Courtesy: Sanket Suresh Rane

The market place had many shops and offices on the Raigad Fort.
Photo Courtesy: Mvkulkarni23