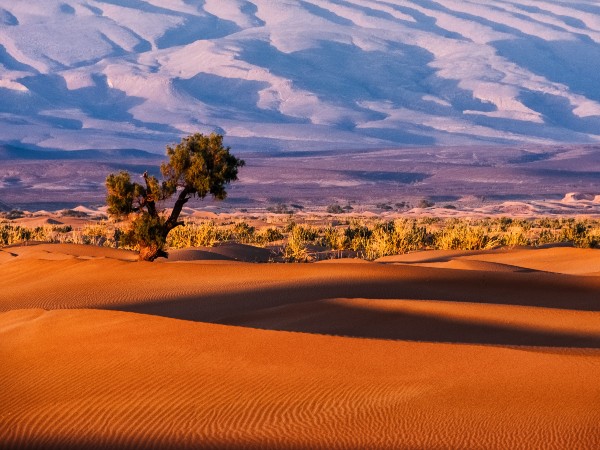 Just beyond the grey gravel plains of northern-western South Africa, the land tilts gently down to reveal one of Nature's timeless masterpieces: an ancient sea of apricot-coloured sand that rolls on apparently forever.

This is the Kalahari, an enormous plain on the African plateau. It is the longest continuous stretch of sand in the world, uninterrupted by areas of stone and gravel as the Sahara is.

Hauntingly beautiful in its immensity, prehistoric in its moods and culture, the Kalahari covers almost all of Botswana, reaches west into Namibia, and continues northwards into Angola, Zambia and Zimbabwe.

To the people who live there, it is known as Kgalagadi, meaning 'wilderness' - a region so vast, so impenetrable and so old that it holds untapped secrets of vanished civilisations dating back 500,000 years. Its sands are home and hunting grounds to the world's oldest people, the Bushmen or San, whose lives have been lived virtually unchanged for 25,000 years. Their astonishing adaptations to scorching heat, lack of water and scarcity of food have enabled them to survive where others would inevitably perish.

Although there are only a few thousand Bushmen surviving in the Kalahari wilderness today, their ancestors have left a legacy of rock art, painted on exposed rock faces and in caves throughout the region.

The rugged cliff faces and caves of Tsodilo Hills, in the remote north-western Kalahari, carry no less than 2750 works of art on 200 sites. The subjects vary from simple geometric designs to groups of animals and men.

Many of the San lived in the southern Kalahari where four ancient dry rivers, the monopoly, Kuruman, Nossob and Auob, snake towards a sandy grave just short of the Orange River. In these desolate watercourses, water only flows in years of exceptional rain.

Around these phantom riverbeds, Nature has sculpted sinuous dunes tinged copper and red by iron oxide in the grains of sand. In this sweltering environment meerkats and other burrowers emerge from their tunnels only to forage - ever alert to the danger of aerial attack from birds of prey, such as eagles, or a ground assault by Cape cobras, Gemsboks, hartebeests, duikers and other small antelope forage on the long grasses between the dunes where temperatures often exceed 50c (120F) in midsummer.

The Kalahari is one of the world's great monuments to the extraordinary powers of fire, wind, water and sand. About 65 million years ago great convulsions shook the earth, the massive outpourings of volcanic lava spewed out over central southern Africa. These undulating seas of lava, up to 5 miles (8km) deep in places, formed high ridges and deep river valleys. Finally, huge quantities of sand blown in from the coast were deposited to create a flat, multicoloured plain the size of modern South Africa.