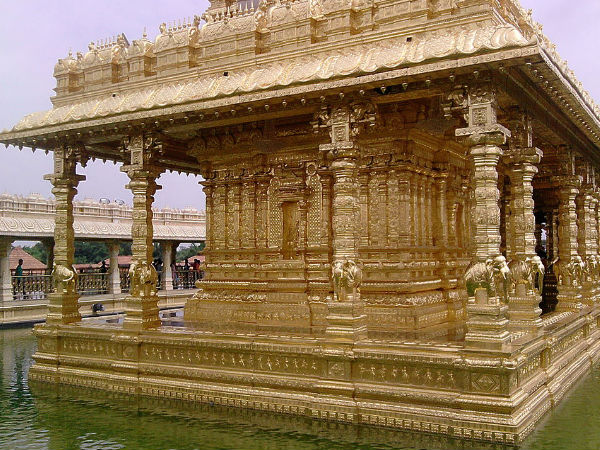 Goddess Lakshmi is one of the prime goddesses for Hindus; there are many temples dedicated to various forms of goddess Lakshmi in India. She is worshipped in different forms and incarnations all over the country.

Mainly, Lakshmi is known as the goddess of wealth, people worship her for the wealth and prosperity. Lakshmi temples are among the prominent ones in India.

Specially in North and West India, this year, it is believed that goddess Lakshmi visits the houses of devotees on the 31 July. Hence, the houses are cleaned, lamps are lit in front of the houses to invite her.

So, let us take a temple tour around some of the famous Lakshmi temples in India and seek her blessings.

Birla Mandir in Delhi was built by the entrepreneur B.R Birla and Vijay Tyagi in 1939. The temple is dedicated to Goddess Lakshmi and Vishnu.

An interesting fact is that, Birla Mandir was inaugurated by Mahatma Gandhi and today it one the prominent tourist attractions in Delhi.

A large number of devotees visit this temple during Diwali festival and Krishna Janmastami.

Sripuram Golden Temple is located in Vellore of Tamil Nadu.

It is dedicated to goddess Lakshmi and is a unique temple in India; the shrine and the temple tower is coated in gold foil.

The temple has a star shaped path representing Shri Chakra (wheel) and is situated in a small hill called Malaikodi.

Sripuram is also one of the biggest temples in India.

Kolhapur is known for the Mahalakshmi temple in Maharashtra. This Shakti peetha is a famous pilgrim site for Hindus.

It is believed that Lord Vishnu is very fond of this region as this the place of his wife Lakshmi. People believe both Vishnu and Lakshmi stay and bless this region.

Kolhapur temple was built by Chalukyas of Karnataka and today it is one of the famous temples in India.

In Ashtalakshmi Temple all the 8 forms of goddess Lakshmi is worshipped; there are shrines dedicated to each form of Lakshmi in the temple complex.

Ashtalakshmi Kovil is located near the Elliot's beach in Chennai.

Beginning from the main deities of Lakshmi and her consort Vishnu, one has to go around the shrines of the goddesses of wealth, offspring, success, prosperity, courage, food, knowledge and bravery.

The temple complex also houses many other Hindu gods and goddesses. A visit to this temple in Hassan is a must for its ancient and intricate architecture.

Mahalakshmi Temple is a temple dedicated to goddess Lakshmi. It is one of the popular temples in Mumbai.

This temple has an interesting story relating to the building of Hornby Vellard (a bridge connecting all the islands of Mumbai).

After the wall of Hornby Vellard collapsed twice, the engineer dreamed of goddess Lakshmi. Surprisingly, a statue of the goddess was found upon searching in the area.

Hence, the statue was installed and a temple was built. It is only later that the Hornby Vellard project was completed.