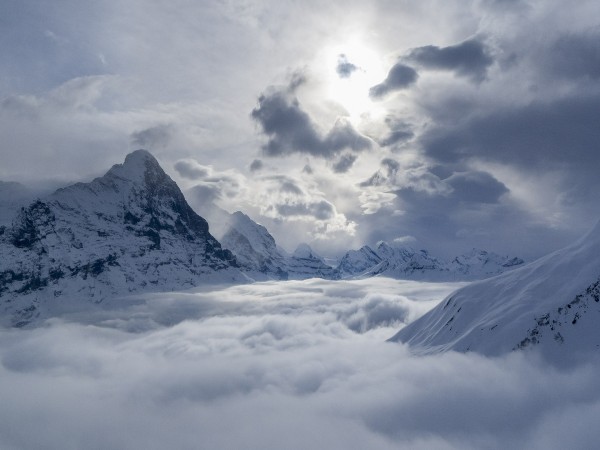 Whenever we search for the most challenging mountains in the world, The Eiger is definitely one of them which rises above the town of Grindelwald and stands at a height of 3970m (13,025ft). The Eiger is a part of the famous Bernese Alps in Switzerland and comes under its mountain range. The Eiger is also called the Wall of death because of its north face, which is one of the most infamous mountain faces in the world.

If you want to witness the spectacular sceneries without any exertion, taking a picturesque train ride to Jungfraujoch, which is the highest train station & observation deck in Europe is the best option available from where the cogwheel train ride up Kleine Scheidegg pass provides stunning views of the Eiger's north face. This can also be seen on a day trip from Lucerne, Interlaken, or Zurich.

The north face of the Eiger attracts many professional climbers in the world. Climbers need both a great level of commitment and skills, along with suitable weather conditions before even expecting an ascent. And there is one more thing that even a professional climber needs and that is timely luck.

In 1858, the summit was reached first time from the western part of the mountain, but it was still, impossible for anyone to climb the north face until 1938.

A team of highly skilled German and Austrian climbers named Andreas Heckmair, Heinrich Harrer, Ludwig Vörg, and Fritz Kasparek, climbed the Eiger from the north face and reached the summit on 24th July 1938. Many upper sections on the mountain were named after these remarkable climbers of the past, such as the White Spider, Hinterstoisser Traverse, Stollenloch, the Traverse of the Gods, and Flatiron.

Since 1935, over 64 climbers have lost their lives trying to climb the Eiger. Hence, Eiger is also called as "Wall of death". Even after this, The Eiger continues to attract climbers from all over the world.

Air: Fly to Berne, which is the closest to the Eiger having a distance of approximately 60 km away.

Train: Take a train from Berne to Interlaken and the remaining can be covered by taxi or by road. Don't forget to take a ride on the magnificent Eiger Express, to see the unbelievable Eiger Glacier.