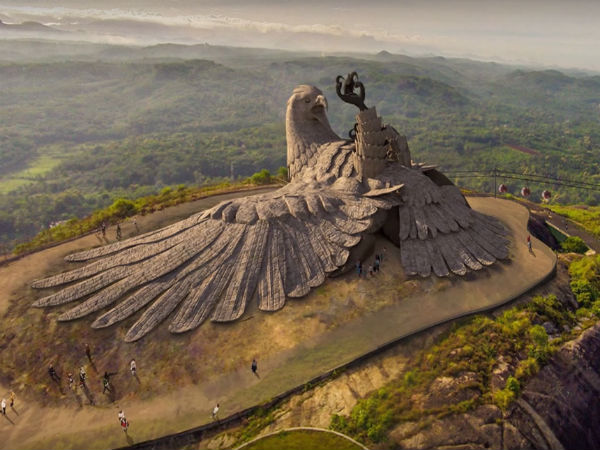 Jatayu Nature Park or Jatayu Earth Center is a park and tourism centre which is under construction at Chadayamangalam also known as Jatayumangalam, in Kollam district of Kerala.

The rock theme based nature park is designed by the well-known film director Rajiv Anchal. The park is the first Public Private Participation tourism initiative in the state of Kerala.

When the Jatayu Nature Park is declared open, it will hold the distinction of being the world's largest bird sculpture which measures 200 ft in length, 150 ft in breadth, 70 ft in height and has a floor area of 15,000 sq ft which comprises of the mythical bird Jatayu.

The rock themed nature park is preparing to open its doors in the month of August 2017. The nature park not only has the mammoth sculpture but also has a collection of sights and adventure games for one to enjoy.

The place has a very unique digital museum, a 6D theatre, Ayurvedic and Sidda cave resort, an adventure zone which comprises of around 20 various sports such as paint ball, laser tag, rifle shooting, rock climbing, bouldering, ATVs, rappelling and many more.

To Mark The Spot

According to Ramayana, Ravana abducted Sita to Sri Lanka. Jatayu the vulture, tried to rescue Sita from the clutches of Ravana while he was on his way. Although Jatayu fought fearlessly with Ravana, he got rid of Jatayu pretty soon, by chopping of his wings which brought down Jatayu atop the rock of Chadayamangalam.

After his fall, when Rama and Lakshmana came across the dying Jatayu in their search for Sita, he informed the siblings about the fight between him and Ravana, after which the asura King proceeded further down South.

By Air: The nearest Airport is located in Thiruvananthapuram, which is around 54 km from here. The airport is well- connected to all major airports within the country and as well abroad.

By Train: The nearest Railway Station is Kollam Junction which is around 39 km from here. The station is well-connected to all major towns and cities across the state and also across the country.

By Road: One of the best ways to reach the place is by road. Kollam is the nearest major town from where one would get regular buses to Chadayamangalam.

At an altitude of 750 ft above sea level, once the park is thrown open to visitors it would be considered as the world's largest bird sculpture and an extra addition to the long list of tourist attractions in God's Own Country.

To reach the sculpture, there are two modes - one is by the overhead ropeway, which lasts for almost a kilometre and will also provide you an overhead view of the place. The ropeway is said to be one of the best in the country and has state-of-the-art facilities in it.

The alternate view to reach the mammoth structure is to trek up the hillock with the help of the stone laid stairway. The structure, which is worth Rs.100 Crores, in its initial phase and the adventure zone is said to span through a radius 3 km.

The park is an eco-friendly destination and will strictly implement the 'no plastic' policy. The park will have rainwater harvesting along with medicinal plant gardens and aims to provide ample employment opportunities for the local residents.

The park will not allow alcohol and non vegetarian food, but will have a full fledged food court for the visitors.