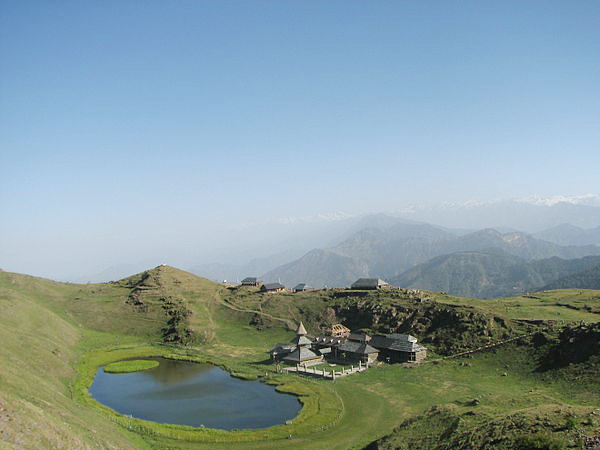 Situated in the Chambal district, Dalhousie is an old school hill station in India. Wondering why it is called old school? Well for starters, Dalhousie is not a place which has any night life so you can say that everyhing winds up here as early as seven in the evening. Again Dalhousie is not exactly shoppers paradise either, yes you can puchase items of interest here but there are no malls or multiplexes. It is a perfect place to head to and rejuvenate yourself far from the noisy city.

The best part about this place is that it provides many more escapades for its travellers and is a major sought after destination. Here is a guide to the weekend getaway places around Dalhousie.

Kangra is located at the meeting point of the Manjhi and Bener streams in Himachal Pradesh and is nestled between Dhauladhar Range and Shivalik Range. It is also commonly known as Dev Bhumi, which means the abode of the Gods. In the great Indian epic Mahabharata, Kangra is referred to as the Trigarta Kingdom. The city was ruled by numerous kings before it came finally under the British. Following the partition of the country in 1947, it became a part of Punjab in 1947, but was transferred to Himachal Pradesh in 1966.

The ruins of the fort.

One of the lesser known tourist destinations in Himachal Pradesh includes the quiet town of Bhagsu. Nestled in a corner between McLeodGanj and Dharamshala this town is mostly forgotten by tourists. Although Bhagsu does not boast of many attractions, what draws tourists here is the calmness and simplicity of the place.

It has a beautiful waterfall under which tourists can take a cool dip and visit a nearby temple as well. It is the place you should head to if you are looking for a break from your mundane lives and if relaxing and rejuvenating is of utmost priority on your holiday list.

Scenic view of the region from atop Indrahar Pass.

Palampur, a hill town, is renowned for its magnificent landscapes and serene atmosphere. Dense forests of pine and deodar and crystal clear streams add to the charm of the place. The place is ideal for spending a quality vacation as it is unlike any commercial tourist spot. Resting at an altitude of 1220 mt above sea level, this place is a treat for nature and art lovers.

The Shiva Temple at Palampur.

Bir is among the popular tourist destinations of the state of Himachal Pradesh. The major population of the town comprises refugees from the neighbouring country, Tibet. This place is popular for its various centres for spiritual studies such as the Deer Park Instituteand the Dharmalaya Institute.

Picturesque view of the region.

Mandi, also known as 'Varanasi of the Hills', is a well known district situated in the state of Himachal Pradesh. Located on the banks of the River Beas, the historic city of Mandi was earlier known as Mandav Nagar after the great Sage Mandav. Famous for its stone temples, the destination has more than 300 shrines devoted to the Hindu deities Shiva and Kali.

Comments
Read more about: kangra bir mandi weekend getaways
Other articles published on Apr 21, 2015
We use cookies to ensure that we give you the best experience on our website. This includes cookies from third party social media websites and ad networks. Such third party cookies may track your use on Nativeplanet sites for better rendering. Our partners use cookies to ensure we show you advertising that is relevant to you. If you continue without changing your settings, we'll assume that you are happy to receive all cookies on Nativeplanet website. However, you can change your cookie settings at any time. Learn more
Change Settings Continue