Watch The Idols Of Durga Come To Life At Kumortuli 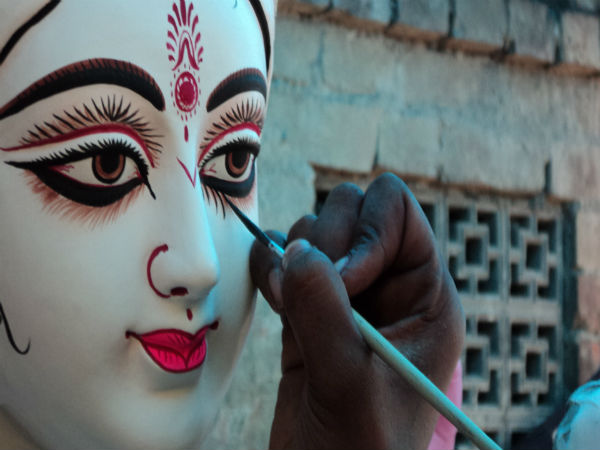 Durga Puja is round the corner and the City of Joy, Kolkata is preparing itself for the biggest festival of the region. Kumortuli is a locality which is the most active locality in the city, as the artisans work day and night to give the finishing touches to the beautiful idols of the mother goddess.

Kumortuli or the potter's settlements dates back 300 odd years. As one walks through the dark narrow lanes, the fragrance of wet clay grabs the attention. The moment you find heaps of bamboo and hay stacks spread all over, it is clear that the idol making is in process. Located on the banks of the Hooghly, the settlement lies to the north of the city.

Kumortuli or Kumartuli in translation means potter's quarter; kumar means potter or artisan. With the passage of time, the place has changed itself into a major place for the sculpting of idols not only for Durga Puja but also for Ganesha Chaturthi, Kali Puja and many other festivals. However, the place is well known for the sculpting of Goddess Durga, whose idols are taken to various parts of the country and across the globe too.

The beauty of the idols tends to leave you spell-bound, but it is not as easy as looking to make one. They are sculpted out of the sun-dried clay which is used over a frame made of bamboo and hay, which gives the initial shape; the entire process is a perfect example of what working as a team would achieve.

Of Narrow Lanes And Muddy Paths

The lanes here are narrow and would begin to turn muddy as the rainwater mixes itself with mud taken from the Ganga along with the dust on the streets, the muckiness of the place and its small dwellings spill onto the streets.

Amidst all this chaos, the majestic sculptures of the goddess takes shape with her arms dominating over a elimination of Mahisasura. She looks calm but yet ferocious, beautiful yet grim, all at once and casts a spell. The muddy hands of a sculptor creates every feature and paints each line with utmost care and devotion; one certainly falls in love with the creation.

The artisans work for hours and days together on a single idol to ensure that the final product is perfect. But it does not come to a closure there, next in line come the painters who would add colour to the idol and give life to the idol by drawing the lotus eyes, as the tailor weaves out red sarees along with other ornaments and decorations.

Drawing Of The Eyes

The final touch is drawing the eyes of the deity, which is usually done on the auspicious day of Mahalaya and this is ceremony is known as Chokhudaan. But with the demand for the idols, one cannot really wait that long to give the final touches, as the puja begins in a few days on the day of Saptami.

Durga Puja is considered as the yearly homecoming of a daughter to her home and is a much-awaited festival amongst all the Bengalis and is celebrated with much grandeur. This year Saptami or the 7th day of Navratri falls on 27th September 2017.