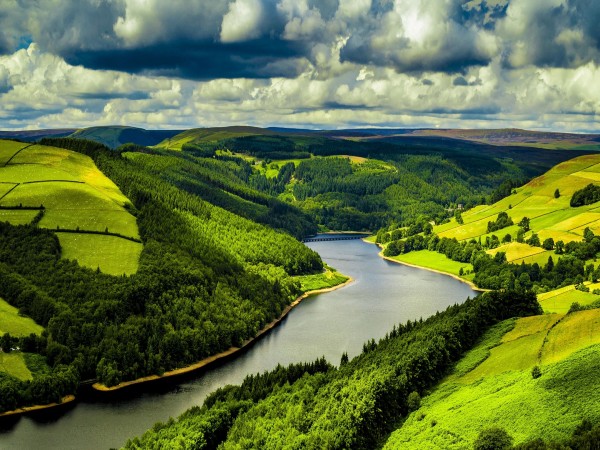 The woods and gentle contours of the road towards Wast Water give little hint of the splendour to come - a view unequalled in the whole of England's Lake District. Ahead lies a sheet of slate-grey water, hemmed in by craggy mountains. A wall of perilous-looking SCREE MORE THAN 1800FT (550M) high plunges steeply into the Lake's depths. No pleasure boats cruise on this lake, and there are no pretty gardens softening the far shoreline - simply stern magnificence.

At the head of the 3-mile (5km) long lake, a scattering of stone-walled sheep pastures radiates from the tiny village of Wasdale Head and gives the impression of a tamed landscape. But above and beyond the fields stand Great Gablein all its granduer, and the knife-edged ridges and crags of lofty Scafell Pike - at 3210ft (978m) England's highest peak.

Wasdale Head has been a much-loved base for rock climbers ever since adventurous Victorian climbers first described the challenges of the crags. Among these pioneers was Walter Haskett Smith, the 'father of British rock climbing, who recorded his climbs in the visitors' Book at his lodgings. Many climbers have stayed in the village inn. In the 1870's it was owned by William Ritson, a local character whose reputation for telling epic stories spread far beyond Wasdale Head.

The tiny village church, one of the smallest in England, has only three windows, one of which carries the apt words of a psalm 'I will lift my eyes unto the hills. Buried in the graveyard are several climbers who lost their lives on the mountain - sudden squalls can make conditions on the steep slopes treacherous, even for the most experienced climbers. Rain clouds shed their load more vigorously in these mountains than anywhere else in Britain, bringing a drenching 120m (3000mm) of rain each year.

It was the scouring force of Glaciers that gouged Wast Water's valley out of granite mountains during the Ice Age that ended 10,000 years ago. Cold, clear water from melting ice and from becks tumbling down the fells have filled the hollow to a depth of 258ft (79m),
making Wast Water England's deepest lake. So few nutrients have been washed into the lake from the surrounding hills that it is almost devoid of life, and only a small number of fish - trout, char, minnows and sticklebacks - can survive.

When winter storms sweep along the valley, they transform the lake into a wave-tossed ocean flinging spray high into the air and draping the dark mountain peaks in a sombre curtain of clouds. In spring a deep rumble occasionally echoes down the valley as the outer layer of the rain-drenched scree slopes avalanches down from the broken crags of Illgill Head into the cold waters of the lake.