Nativeplanet
»
Travel guide
»A Journey To Kankaria Lake In Ahmedabad

A Journey To Kankaria Lake In Ahmedabad 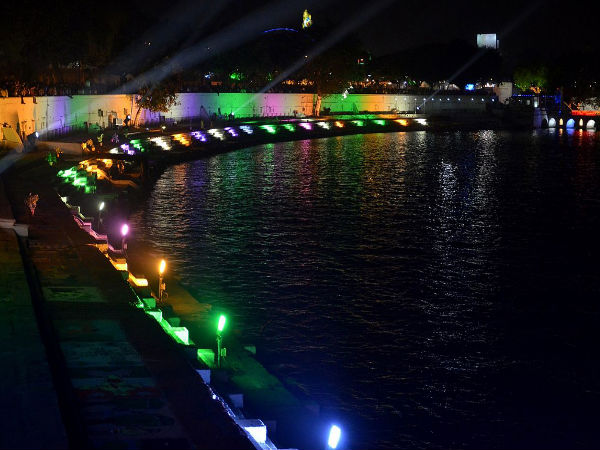 Gujarat has some of the best lakes in India. Kankaria Lake in Ahmedabad is a tourist attraction that is not to be missed on your trip to the city. Let us take a virtual tour of this amazing lake.

Kankaria Lake is an artificial lake that was built in 15th century, which was then used by the Kings to bathe. The lake then had water purifying properties, which was lost with time. The lake was later renovated and inaugurated in 2008, in a week-long Kankaria Carnival.

There are several attractions at the lake complex that attract tourists and travellers alike. The attractions include the following:

The Kamla Nehru Zoological Garden, also known as the Kankaria Zoo, is one of the major attractions of the complex. Spread across 21 acres of land, it is also one of the best zoos in Asia. Some of the animals you can spot here include the spotted deer, python, tiger, lion, rhesus monkey, jungle babbler, emu, bush-quail and common palm civet.

There's an amusement park within the complex that has some amazing rides for you - like Boomerang Roller Coaster, the Flipping Arm, Disc 'O' Pendulum and the Torching Tower that were installed by a Netherlands based company.

There are a few toy trains here that can take you around the Kankaria Lake complex. The toy trains, though designed keeping kids in mind, can also carry adults, though in limited numbers.

Balvatika is a children's park located within the complex. The park has a boat house, playroom, mirror house, planetarium and a toy house amongst other attractions.

This is a miniature city designed for kids. It has 18 sections dedicated to kids and their amusement. These sections include a heritage gallery, radio station, banks, police station, fire station, science lab, medical hospital, etc.

Ahmedabad Eye is a tethered balloon ride that was set up at Kankaria Lake after renovation in 2008. Take a balloon safari around the lake when you visit it!

The other attractions of the lake include Nagina Wadi, an island in the middle of the lake, Stone Mural Park, other joy rides, etc.

How To Reach Ahmedabad?

Comments
Read in Hindi: भारत का मेनचेस्टर अहमदाबाद
Read more about: lakes nature ahmedabad gujarat travel india
Other articles published on Jan 31, 2017
We use cookies to ensure that we give you the best experience on our website. This includes cookies from third party social media websites and ad networks. Such third party cookies may track your use on Nativeplanet sites for better rendering. Our partners use cookies to ensure we show you advertising that is relevant to you. If you continue without changing your settings, we'll assume that you are happy to receive all cookies on Nativeplanet website. However, you can change your cookie settings at any time. Learn more
Change Settings Continue