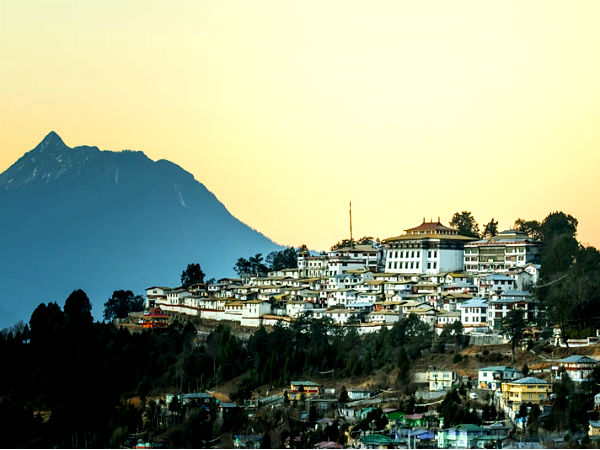 Tawang is a quaint town located on the corner of Arunachal Pradesh with Bhutan on its East, is a beautiful place that was historically part of Tibet and inhabited by Monpa people. Tawang is till date inhabited mostly by this tribe of people. One of the most important place of attraction in this town is the Tawang Monastery.

Tawang Monastery is the largest Buddhist monastery in India and the second largest in the world, making it the most important site of pilgrimage in India for Buddhists. Also known as Galden Namgey Lhatse which literally means 'celestial paradise in a clear sky', the beautiful monastery truly lives up to its name.

It is perched on top of a mountain at a fearsome altitude of 10,000 ft, which gives a brilliant panoramic view of the entire Tawang River Valley, that is spread with lofty snow-capped mountains and lush green thickets of coniferous trees. The monastery belongs to the Gelug, also known as Yellow Hat, sect of Mahanaya Buddhism.

The majestic monastery was established in 1680-81 by Merek Lama Lodre Gyatso, obeying the commands of the 5th Dalai Lama. The monastery had to be built as a fort, as a defensive structure.

This was because it used to be dominated by the Nyingmapa sect (black hat) of Buddhism, and the Drukpas of Bhutan tried to take control of this part of Tawang. Up until the 1914, the monastery was controlled by Tibet, and after signing an agreement, it came under the control of British Raj.

There are quite a few intriguing legends associated with this beautiful monastery. One such legend states that while scouting for an ideal location to establish the monastery, Merek Lama Lodre Gyatso made an intense search, since he was summoned to do so by the 5th Dalai Lama.

He failed to do so and went into a cave for a night, where he prayed intently to help him find the right place. Next morning, his horse went missing. When he went looking for his horse, he saw his animal grazing on a mountain top, which he saw as a divine intervention and decided to establish the monastery.

The monastery welcomes devotees with a vibrant gateway called Kakaling that is shaped in form of a hut and elaborately decorated with mandalas on its roof. The monastery is a three storeyed building that is surrounded by wall of 925 ft.

It consists of a huge assembly hall, 65 residentials for monks and Lamas, a school and a Buddhist cultural studies centre on the whole, and can accomodate 450 monks at once. Walls of the monastery is beautifully decorated with colourful thangkas and curtains that have Buddhist symbols painted over them.

Dukhang or the assembly hall, which is the main part of the monastery, consists of an enormous image of Lord Buddha that is of 18 ft height, and is believed to be donated by the 5th Dalai Lama.

Apart from these, the monastery also includes a library that has a printing press, where wooden blocks are used for printing religious texts. Hundreds of scriptures can be found in this elaborate library.

Losar and Torgya are the two main festivals celebrated in the monastery. Losar is a 15 days long festival celebrated to mark the beginning of a new year, following the lunar calendar, and therefore falls in the month of January.

Torgya is a festival that celebrates the victory of good over evil spirits. All the Lamas of the monastery celebrate this 3 day festival by making a Torgya, a pyramidal structure that created from barley flour, illuminating the monastery and offering prayers. It falls on the 28th day of the 11th month as per the lunar calendar.

Visit Tawang between March to August when the town faces a pleasantly cool climate. If you wish to witness snowfall, early winter season of October to December is the right time to enjoy the snow as well as be able to go on sightseeing.