Visakhapatnam To Vijayawada – To The Future City With Incredible Attractions 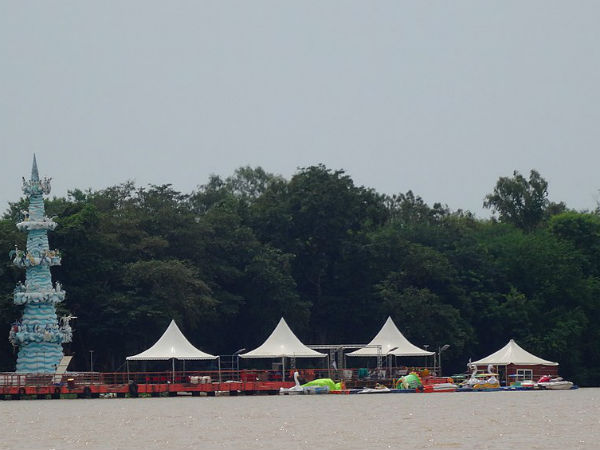 Settled on the banks of river Krishna, Vijayawada is one of the fastest-developing cities in India and is the commercial headquarters of Andhra Pradesh. Even though the city boasts of its rich history and culture and is believed to have been in existence since the era of the epic Mahabharata, it is popular as an urban centre today.

However, it is home to numerous tourist spots, ranging from hills to river beaches, islands to caves and temples and gardens. Wouldn't you love to explore this urban centre which has in store hundreds of tourist attractions to explore?

Do you know Vijayawada is also home to a river museum, which is one of its kind in the entire country? So, let's plan a weekend trip from Visakhapatnam to Vijayawada this season. Read on to know more about how to reach Vijayawada and its beautiful spots to explore.

With a tropical climate, Vijayawada experiences hot summers and cold winters. Hence, the best time to visit is from September until the end of March, as during this period the temperature conditions are optimum and the weather is favourable, thereby, letting its visitors roam around comfortably. You can also visit Vijayawada during the rainy season and savour the beauty of its lush green surroundings.

How To Reach Vijayawada From Visakhapatnam

By Road: You can easily approach Vijayawada by road.

On your way, you can also take a break at Rajahmundry and explore its beautiful tourist spots.

One of the few cities in India which are popular for their religious, historical and cultural importance, Rajahmundry is a perfect destination for a tourist looking forward to exploring the history and nature of Andhra Pradesh. Also known as cultural capital of Andhra Pradesh, this beautiful metropolis has everything within its boundaries, ranging from natural marvels to historical monuments.

Hence, you should not miss out on this wonderful en route destination. The major places here include Dowleswaram Barrage, Cotton Museum, Godavari river beaches and Kotilingeshwara Ghat Temple. Rajahmundry is located at a distance of about 160 km from Vijayawada and 190 km from Visakhapatnam.

Nestled peacefully on the banks of river Krishna, Vijayawada lies at a distance of about 350 km from Visakhapatnam and hence, it is a perfect weekend getaway to spend time with your friends and family on account of the presence of several tourist attractions which interest people of all ages. Following are the major places in the metropolis of Vijayawada which you must not miss if you are looking forward to learning about the history of India and the natural beauty of Andhra Pradesh.

The most popular tourist attraction, Kanaka Durga Temple is believed to have been in existence since the Vedic Period. However, the exact history of the temple is still a debatable topic. The temple is located on Indrakeeladri Hill and overlooks the beautiful settlement of Vijayawada.

Another beautiful tourist spot, Prakasam Barrage is built across Krishna river and was constructed in the year 1957. Apart from boating in its relaxing waters and photographing its scenic beauty, you can also laze by its mesmerising expanse and savour the beauty of unpolluted nature. The nearby locations of Prakasam Barrage are perfect spots for picnickers.

Spread over an area of 133 acres, Bhavani Island is one of the largest islands in India and is located in the midst of Krishna river. It is an ideal spot in Vijayawada to soothe your nerves. The island is home to resorts, parks and museums. Isn't it a beautiful stoppage to spend weekends?

Standing at an elevation of about 500 feet, Gandhi Hill is famous for its beautiful memorial dedicated to Mahatma Gandhi, the father of the nation. From a library to a planetarium, each and every corner of Gandhi Hill teaches its visitors about Mahatma Gandhi and his achievements.

One of its kind in the country, Krishnaveni Mandapam is a river museum in Vijayawada where you can learn in detail about the history of Krishna river, ranging from its origin to its religious significance. How about acknowledging the beauty of Krishna river through this unique museum?

Undavalli Caves are some of the oldest rock-cut monuments in Andhra Pradesh and date back to the 7th century when these caves were used as meditation centres and residence by Buddhist monks. If you are a history lover, then you should not forget to visit this ancient marvel of Vijayawada.

Apart from all the above-given places, you can also visit Mogalarajapuram Caves, Kondapali Fort, Kolleru Lake and Victoria Museum.