Venture through Wildlife in Assam! 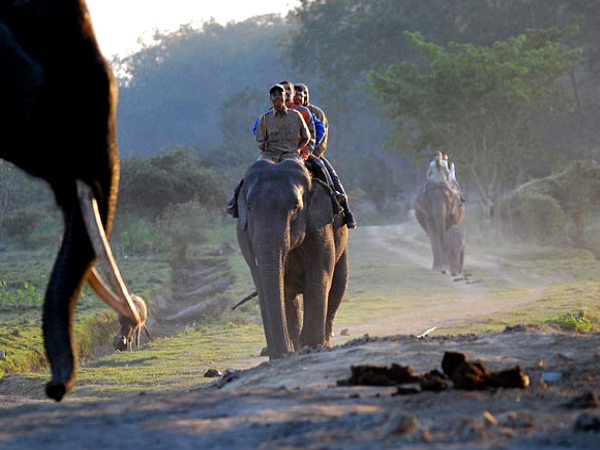 Assam is a state that's abundant in scenic beauty and thick woods. The wildlife in Assam is what makes it unique from the rest of the states in India. The rarest of the rare wild species of animals are found here like Swamp Deer, white-winged wood duck, clouded leopard and dolphins! Having said this, let me also remind you that the best time to visit these national parks is between October and April.

If you have a dream to see a tiger very close, head to Assam to their cast stretched of wildlife sanctuaries and national parks. The undamaged forests here serve as perfect homes to the wild. Here are some of these national parks that the state boasts of.

One of the famous national parks in Assam, the Manas National Park is a UNESCO site that is also a Project Tiger Reserve, an Elephant Reserve and a Biosphere Reserve. From Guwahati in Assam, the national park extends up to Bhutan. Jungle safaris and treks are common among adventure tourists here. One can also find endangered animals like Pygmy Hog, Assam Roofed Turtle and Golden Langur.

A speciality of this sanctuary is that it is the only sanctuary where you can find hillock gibbon, the only gibbon present in India. The sanctuary is popularly known as Gibbon Wildlife Sanctuary. It also has other animals such as Assamese Macaque, Stump tailed macaque, Rhesus macaque, Bengal slow loris among other animals. A variety of birds that include the resident and migratory birds are also found here which includes the Indian pied horn bill, the hill myna, Osprey and Khalij pheasant. This sanctuary is located in Jorhat.

This is a national park that gives beautiful views of nature as it has small rivers that flow through it. The park is home to several wild species like wood ducks, bee eaters, babblers, wild boars, black bears, etc. Angling is an activity that tourists look out for in the sanctuary. It is located around 35 km from Tezpur in Assam.

Since this park is similar to the Kaziranga National Park, it is also called the mini Kaziranga Park. You may find the grasslands and landscapes of both the national parks similar. A peculiarity of the national park is that the Great Indian one-horned rhinoceros are found here. Many migratory birds such as the White pelican, Adjutant stork, King fisher and the Shelduck are found here among the other wildlife in Assam. The royal Bengal tiger, Pygmy hogs and Civets are some of the animals seen in the national park. It is located around 135 km from Guwahati.

You can find around 275 species of birds here! What's more, you can also find 14 varieties of reptiles, 60 types of fish and 11 species of amphibians here. It is also the second best protected habitat of the Golden Langur. The two beautiful lakes Dheer Beel and Dhiplai Beel that borders the sanctuary make the trip all the more refreshing. The sanctuary is near to Kokrajhar which is 6 km away.

The Pobitora Wildlife Sanctuary is populated with a large number of wildlife in Assam like the rhinos and it is said that the animals are moving out of the sanctuary's boundaries as it is over-populated. Apart from these animals, over 2000 migratory birds visit the sanctuary every year and wild animals like Asiatic buffaloes, wild cats and wild bears can also be seen here. The sanctuary is located around 60 km from Guwahati in Marigaon district of Assam.