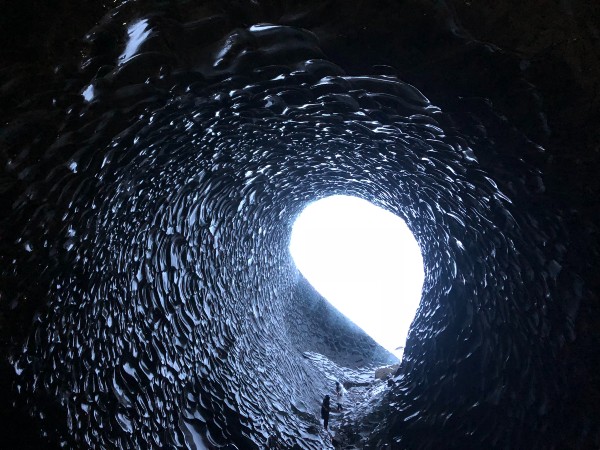 On Vatnajokull, Iceland's massive ice sheet, there is nearly as much ice as on all Europe's other glaciers put together. It covers an area almost half the size of Wales or New Jersey and pushes out a dozen major glaciers from its smooth cap.

When viewed from the coastal road, Vatnajokull seems a lifeless wilderness. From the desert of black gravel, ash and sand at its feet, the ice rises through mountains to form a sweeping white plain over 1/2 mile (800m) thick that forbids all life. But life - of a fiery, geological sort - certainly exists here. The icy wasteland is continually growing, contracting, pulsing, to a slow and sometimes violent volcanic heartbeat.

Vatnajokull's restlessness is typical of the landscape of Iceland, an island almost the size of England but with a population no larger than that of a medium-sized town, scattered mainly along its narrow coastal strip. Geologically new and still forming. Iceland stands on basalt rock 4 miles (6.4km) thick that has, over the last 20 million years, been poured our from a 'hot spot' on the Mid Atlantic Ridge, flow continued for some three months, blanketing the island three months, blanketing the island in a blue haze that contaminated the grass and led to the death of three-quarters of the livestock. As a result of this 'Haze Famine', nearly 10,000 people starved to death.

In the early hours of January 23, 1973, the volcano Helgafell on Heimaey - one of the 15 islands of Vestmannaeyjar (Westman Islands) - which had been dormant for about 5000 years and was considered extinct, awoke from its long sleep. Near the edge of the town, the ground split open, forming a curtain of fire 1 mile (1.6km) long. Luckily, the local fishing fleet had been kept in port by a storm, and by midday 5000 islanders had been carried to safety.

Lava oozed into the edge of town, pushing over houses and setting them on fire. By April, despite a massive operation to cool the advancing lava with jets of seawater, the eastern part of the town had been buried under lava and dust. The eruption ended after several weeks, without wreaking total havoc. It gave Heimaey an extension to its eastern coast, including a new protective wall to the harbour approaches.

Volcanic fire and glacial ice combined underline Vatnajokull's shifting moods. The effects are clear at the core of the ice cap, which, seen from an aeroplane ride, sometimes reveals an astonishing sight: a deep-blue lake measuring 2 miles (3km) across, melted from the ice by the volcanoes Grimsvotn, which grumbles below the ice cap.

Usually, the lake is covered by a sheet of ice, but even while invisible it remains as a sump of meltwater.

The ice on one side of the lake acts as a giant stopper and prevents water from flooding down a valley. However, the lake water rises some 40ft (12m) a year, and every 5-10 years there is enough to force away under the ice dam in a torrent called a 'glacial burst'. The lake level drops by up to 700ft (215m) as the floodwater flows down to the plain below, spreading volcanic mud.

Iceland's volcanic rock surface was gouged by glaciers more than 1 mile (1.6km) thick during the 2 million years of the last Ice Age, which ended about 10,000 years ago. The centre of the country is a wilderness of volcanic mountains, craters and lava. One-tenth of the land is covered with lava that has erupted from its 200 volcanoes - one of the lava fields extends for more than 1000sq miles (2600sq km).

The first record of Iceland may have been made some 1500 years ago, by St Brendan (about AD 484-578), Abbot of Clonfert in Country Galway, Ireland. He reputedly voyaged to America about 300 years before the Vikings settled Iceland. At one time the account of his voyage was considered a fantasy. Now, most scholars accept that it may have occurred.

Icelanders have always understood the shifting nature of the ice. In the words of an 18th-century scientist, Sveinn Palsson: ' The ice by its very nature is semi-liquid and flows without melting, like pitch.' Ice grinds down into the warmer valleys at the rate of about 1/2 mile (800m) a year, cracking open to form crevasses as it tumbles over uneven bedrock. When, at the lower levels, the ice reaches melting point and peters out, it dumps chaos of rubble - rocks, sand and gravel scraped from the mountains.

According to an Icelandic saying, 'The glacier delivers back what it takes. In 1927, John Palsson, a postman, fell into a crevasse with four horses while crossing a snow bridge on the Briedamerkur glacier. Seven months later, all the bodies were found on the surface - the circular movement of the ice carried under and the bottom ice rising, had apparently brought them to the top.