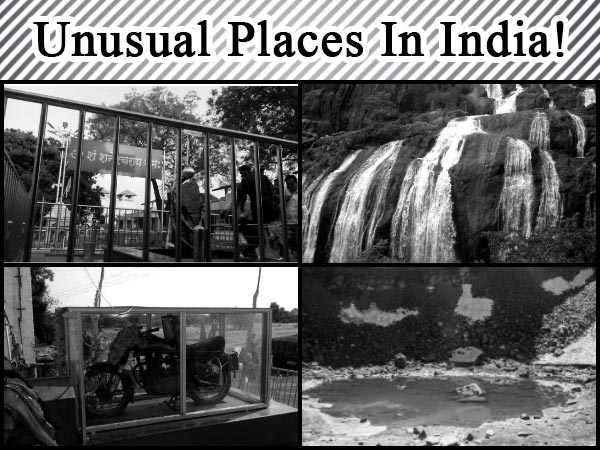 India is not merely the name of a country, but it showcases a boiling pot of culture, traditions, history and hospitality to name a few, and many more to the list. One of the oldest civilizations across the globe, India has always been the centre of attraction for the rest of the world.

In the earlier days, it was one of the hotspots for trading of spices and merchandising. What was once seen as the land of snake charmers and yogis, has now evolved into one of the fastest growing economies of the world.

The world knows, India has a colourful amalgamation of age old traditions and culture, there are several interesting mystiques that have also kept the researchers on their toes and the logic of science being scrutinised.

Whilst, a visit to the Taj Mahal or India Gate finds its way to most of the travel bucket lists, there are many places that are very unique in what they have to offer you. And these offers are for sure to blow your minds off and would force you to begin a quest to find out what exactly happened.

We bring to you 10 unusual places across the country which would force you to put on the Sherlock's hat and search for more.

Kodinhi, a town in the Malappuram district of Kerala, has a very unique factor which makes this ordinary town, extraordinary. Once you enter into this place, you will start to see a double of almost everyone.

Kodinhi has as of now 200 pairs of twins, and 2 pairs of triplets, but it doesn't stop there. The women of Kodinhi, who are married to different places are also giving birth to twins or triplets. According to the doctors, this phenomena occurs due to a chemical which is present in the water of this locality.

Shani - Shingapur, a place located in the Ahmednagar district of Maharashtra, which is famous not only for the Shani Temple but also for a village with no doors or door frames. It is believed that the Lord Shani, protects the village and his devotees.

The mystery is that none of the houses, even schools, government buildings or even commercial houses don't have doors or door frames. In addition to this, not a single crime has ever been reported here. What's more, the local branch of the United Commercial (UCO) Bank has chosen to not have any locks on their doors, making it the first lock-free bank in the country.

The Village Of Cooks, Tamil Nadu

Kalayur Village, in the district of Ramnathapuram, with 356 houses and a total population of around 1450 people, has more than 200 professional cooks who all are men! This village would start giving you the aroma of spices the moment you put your foot in.

In addition to the Mummy Cooks, there are the Daddy Cooks in each and every household, in this village which gave it the name, the village of cooks. The oldest cook in the village is 65 years old, who is one amongst the Head Cooks. They say that the entire village functions as a single team.

Marottichal, a slow-moving, placid, quiet, peaceful, sleepy village which is about 25 km from Amballur in Thrissur. The village has a population of around 9000 and almost all of them play Chess.

It is a known fact that in the 60s and 70s, this village was addicted to alcohol and almost every family was troubled by liquor made locally in the village. The sufferings were so severe that villagers called the excise officials to raid the village.

Unnikrishnan, who was then 16 years old, was inspired by the American Grandmaster Bobby Fisher, got addicted to the game and started to learn various moves in the game of Chess. His interest went into whole different level and he began to give lessons to others as well.

The people who were tutored by Unnikrishnan also followed his footsteps and got engrossed in the game of Chess, with the men involved in the game, they soon forgot about alcohol and Chess became their addiction.

The shrine was built in honour of Om Singh Rathore or Om Banna. Also, known as the Bullet Baba Temple, it is perhaps one of India's most unusual shrines.

According to locals, on the night of December 2, 1988 when Om Singh was riding on the roads of Pali, he lost control of his bike and crashed into a tree, leading to his death. The following morning, the local police took the bike into custody but it so happened that every night since then, the bike would escape from their custody and find its way to the accident site.

Even after emptying its fuel tank and keeping it locked, the bullet would tend to return to same point before dawn. This was seen as a miracle and since then the locals built a temple to honour the bike and the soul of Om Singh. It is believed that his soul helps distressed travellers and praying to the motorcycle, would keep travellers safe.

According to Hindu Mythology, the ‘vanar sena' of Lord Ram built a bridge to Sri Lanka with the stones which could float in the water. These stones can still be seen at Rameshwaram.

According to Ramayana, the stones began to float in water only after Rama's name was inscribed on them.

Located in Deshnok, some 30 km from Bikaner in Rajasthan, the Karni Mata Temple also known as the Rat Temple, houses as many as 20,000 rats within its premises. The rats here are considered sacred and is believed to be the youngest son of Karni Mata who drowned in water. She prayed to Yama, the Lord of Death, to bring him back to life.

Yama could not do so, hence he gave her a boon that all her of kins would reincarnate in the form of rats and ultimately die and be born as humans again.

Some say that around 20000 soldiers left a battle out of fear and found shelter in Deshnoke, once Karni Mata heard of this, she spared their lives but turned them into rats.

If a rat walks over your feet here, it is considered to be auspicious. In spite of the large population of rats here, the place is entirely plague free.

And if you happen to kill a rat here, you are supposed to replace the dead rat with another one made out of either gold or silver with the exact weight of the dead one.

Roopkund, also known as Skeleton Lake, is a high altitude lake which has gained fame through the numerous skeletons found in its surroundings. The human skeletons date back to 9th century AD and were excavated in 1942.

As per the legends, the skeletons are said to be of Raja Jasdhaval, who was the King of Kanauj and his army which was killed on its way to the Nanda Devi shrine. However, the remnants that belong to over 300 people have been found here.

The Land of Snakes, Maharashtra

Shetpal also known as the land of snakes is located in the Sholapur district of Maharashtra. Every house in this village has a resting place for cobras, and the snakes here appear to be very friendly. An interesting fact is that there has been no reported case of a snake bite until this day.

The cobras here move about freely and are worshipped and taken care of by the villagers in honour of Lord Shiva.

Established in 1992, by Dr. Brindeshwar Pathak, his objective was to highlight the need to address the problems of sanitation in the country.

The Time magazine counts it among the weirdest museums in India even as it exhibits the evolution of toilets from over 50 countries from across the globe, along with artefacts collected from 2500 BC to the latest ones.

Comments
Read more about: unique travel ideas travel india
Other articles published on Feb 25, 2017
We use cookies to ensure that we give you the best experience on our website. This includes cookies from third party social media websites and ad networks. Such third party cookies may track your use on Nativeplanet sites for better rendering. Our partners use cookies to ensure we show you advertising that is relevant to you. If you continue without changing your settings, we'll assume that you are happy to receive all cookies on Nativeplanet website. However, you can change your cookie settings at any time. Learn more
Change Settings Continue