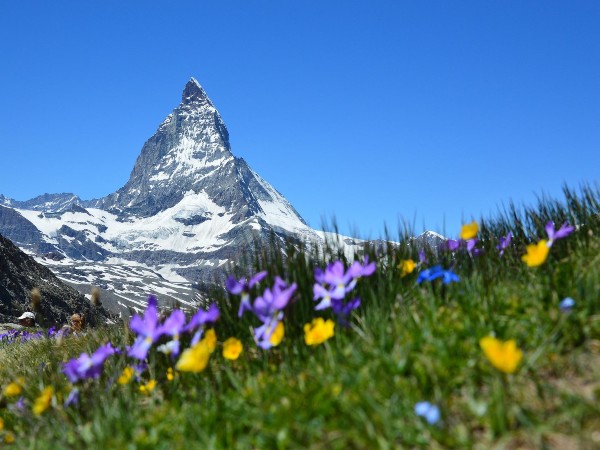 One of the tallest mountains in the Alps and all of Europe is the "Matterhorn Mountain". The Matterhorn is the Alps' twelfth-highest peak at 4,478 meters (14,692 feet) above sea level. Of all the Alps' peaks, it is possibly the most identifiable.

The most photographed peak in the world is this massive pyramid-shaped mountain that is extremely challenging to climb. Did you know that it is one of the 48 Swiss peaks that rise beyond 4,000 meters and is the tenth-highest mountain in Switzerland? Keep reading to know such amazing things about Matterhorn Mountain.

Here are Unbelievable Things You Never Knew About Matterhorn Mountain:

Around 50 to 60 million years ago, the African and Eurasian tectonic plates clashed, pushing layers of sedimentary rock that had developed in the oceans between them up above sea level. This is when the Matterhorn & the rest of the Alps began to emerge. According to experts, the Matterhorn was once a circular hill but over the course of the previous million years, it evolved into its distinctive pyramidal shape as a consequence of natural erosive forces. The African continental plate & the Laurasian, or European plate, which make up the Earth's crust, collided to form the mountain. Actually, it is the African continental plate is where the peak originates.

The initial ascent, finished in 1865, was fatal; four of the team's seven members died in falls during the ascent. Since that time, the Matterhorn has continued to be a dangerous ascent, with several people failing to descend the summit each year. Since 1865, more than 500 individuals have died on the peak, many of them while descending. Deaths are caused by falls, lack of knowledge, poor judgement, terrible weather, and rocks falling. During peak season, the mountain can have up to 3000 climbers per year.

The Matterhorn is situated where Switzerland and Italy meet. The summit offers views of the Italian town of Breuil-Cervinia in the Aosta Valley to the south and the Swiss town of Zermatt in the canton of Valais to the northeast. The terms "meadow" (Matte) and "peak" (horn) are the origins of the name Matterhorn in German. The "meadow" where Zermatt gained its name is the same one. Since Zermatt directly translates to "At the Meadow," the Matterhorn is also known as the "Peak at the Meadow." So, in English and German language it is known as the Matterhorn, and in Italian and French, it is known as Monte Cervine and Mont Cervin.

The first female who climbed Matterhorn was wearing a skirt:

Lucy Walker, an Englishwoman, was the first woman to summit the Matterhorn on July 22, 1871, and she did so while wearing a long skirt. Lucy Walker headed straight for the mountain & started climbing as soon as she heard that her opponent Meta Brevoort, a fellow climber who had failed to reach the top a few years before due to bad weather, was also going to Zermatt. The success of Walker quickly became known all over the world. Brevoort was unaffected by this news & managed to reach the summit as well. She arrived at the summit a few days after Walker, who is officially the first woman to ascend the peak from the Italian side.