Uluru: Sacred Rock Of The Aborigines 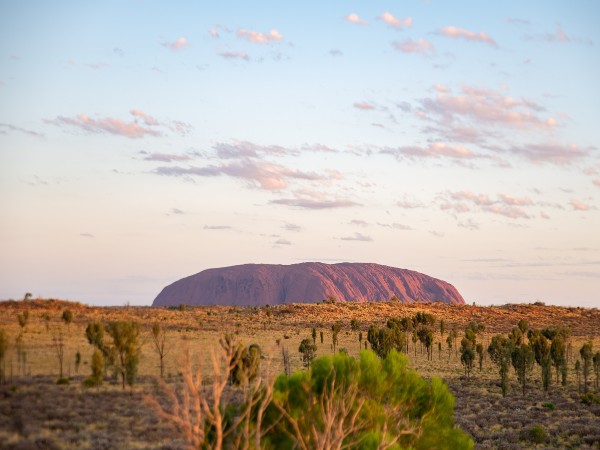 Wind-clown sands have sculpted the domed, elephantine bulk of Uluru, which rises abruptly from the flat and arid plains of the Northern Territory, almost at the very centre of Australia. To the Aborigines, the age-old red rock known as; Uluru' has always been a sacred, mystical place. Now it has also become a national symbol.

As the sun moves across the sky, Uluru glows with ever-changing colours. See it as dawn breaks and it takes on the orange glow of sunrise. Early morning shadows give it a dark and rusty hue. Go there at noon and the rock is suffused with amber. Sunset turns it into a spectacular, crimson mass like a glowing giant coal.

Uluru is not a gigantic boulder. It is a sandstone hill that was pushed up by earth movements about 500 million years ago; most of it submerged in the surrounding sea of dunes. Only its flattened, 1142ft (348m) high tip is exposed - a formation known as an inselberg or island mountain. Fine parallel grooves cover the rock surface, which is about 2 miles (3km) across. At its base, 6 miles (10km) round, there are caves and cavities weathered into strange shapes. On the north-east side, a 500ft (150m) high slab has split away and is known as the Kangaroo's Tail.

Rainfall is mostly rare here, but can occasionally be heavy. After a rainstorm, water cascades down the rock's towering flanks, which rise sheer in places, leaving them streaked with black. Waterholes build up in rock crevices, but most rain runs off onto the plain below, sustaining plants such as blue-grey sandalwood, bloodwood (a type of acacia), as well as desert oaks and clusters of hummock grass among the surrounding sand hills.

The oaks' needle-like leaves cut down water loss, and their thick cork bark keeps out the heat. On the south face, the large pool of Mutitjulu (which is also called Maggie Springs), has water in all except the very driest periods. Some other water holes persist for weeks or months, but most evaporate fairly fast in the heat.

Water snakes dwelling in the pools are believed by the Aborigines to be pool guardians. Highly venomous king brown and western brown snakes, reaching around 6ft (1.8m) long, also inhabit the region. The frogs, lizards, marsupial moles and hopping mice living on the dunes offer the snakes easy prey. They are also taken by dingoes - Australian wild dogs, which scavenge camp and picnic sites.

Red kangaroos sometimes browse in the area, and the shy, smaller, rock-dwelling wallaroos spend the day in rock caves. Some 150 species of bird also manage to survive here, including the large flightless emu. The wedge-tailed eagle and the honeyeater.

For the Anangu people, Australian Aborigines who live in the area, Uluru is a place of reverence around which their lives have centred for thousands of years and is part of their code of living, the Tjukurpa (pronounced 'chookoorpa'). This code includes caring for the land. Since 1985 Uluru has been part of the Uluru-Kata Tjuta National Park, 500sq miles (1300sq km) in extent, owned and administered by the Anangu people. For them, the Uluru area is the focus of converging ancestral tracks or Iwara. Every part of the rock, every cliff, boulder and cave, has sacred significance, and some caves, chiefly at Mutitjulu and Kantju Gorge, are decorated with Aboriginal paintings in ochre, ash and charcoal.

Uluru was unseen by European eyes until the early 1870's when two explorers, Ernest Giles and William C. Gosse, ventured into the area. They named the rock after Sir Henry Ayers, then premier of South Australia, and until recent times, Uluru was popularly known as Ayers Rock.

Because so many people visit the rock each year, some restrictions are in place to avoid despoiling the area. A climb to the summit takes about two hours, but is alien to Aboriginal culture and is discouraged. A walk around the rock takes about four hours. The shorter walking tours include the Liru trail, with Aboriginal guides to explain their culture and point out some of their foods, such as mulga 'apples' - small wasp galls. The informative Cultural Centre can be found 1km from the rock. Visitirs to Uluru are given an age-old greeting Pukulpa pitjama Ananguku Ngurakura - 'Welcome to Aboriginal land.'